The attendant was very friendly and gave us 2 ‘lucky coins’, telling us to keep them 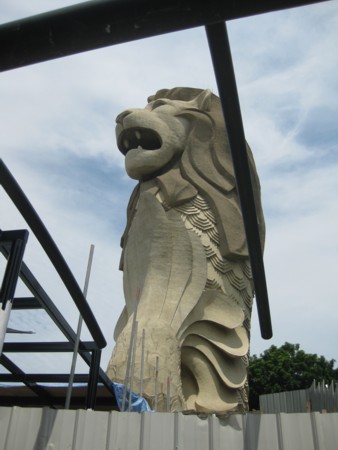 safe as there was a surprise at the end.  We went along a couple of semi-darkened passageways, looking at some sea creature carvings, and pictures that had words and poems on them and realised that the piped music was singing the words we were looking at.  But shortly the passageway ended at a door with no handle and we were stumped.  Looking at each other and saying “Well, this is exciting!” we saw a countdown display above the door saying ‘the next show starts in 3 minutes’ and, not knowing whether we needed to find ‘the show’ or it would find us, we stayed put.

The countdown reduced and a group of Asian tourists joined us and then, magically as the count reached zero, the door opened of its own accord and we went into a theatre with 2 massive, black fabric coated steps and perched ourselves on there in front of a screen.  We viewed a little film with Chinese subtitles about the legend of the founding of Singapore and the reason for the Merlion symbol and then that excitement was over 🙂  A girl greeted us at the far door and ushered us into a lift, checking we had our magic coins with us, and pressed floor 10 while instructing us to press G1 (I think it was) when we came back down.  The lift didn’t move and David said something about being conned, but eventually we did feel a little movement.  I don’t think it was 10 floors though!

Out we got and followed a narrow path and climbed some more steps and found ourselves with a group of people at the mouth of the Merlion, accompanied by the 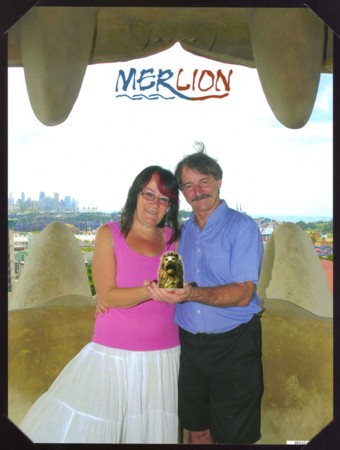 compulsory staff photographer.  Nobody got to admire the view from the Merlion’s mouth, we just had to put our bags down and pose for the photographer – once with our hands palm up on top of each other’s and once pretending we were making lion claws with our hands.  Very kindly, the photographer also took both shots with our own camera, as he had done for the people before us, but of course instamatic cameras are not set well for taking photos with the light behind you so we did buy his.  This is a scan of the professional one and when we got it we could see why he made us put our hands as he had.  They added a tiny Merlion!!!  The teeth behind us and the view beyond were the real thing though.

From here we went back down the steps but then around beyond the lift doors and up some more steps before coming out on the very top of the Merlion’s head to enjoy some panoramic views.  And to listen to a German family.  I adore listening to any language but German is my favourite.

The German mum had some tiny shorts on and I said to David “Well, I’d mark those as a fail!”  The pocket linings were hanging far below the bottom hem!  She did have nice legs though so I can understand her desire to have them hanging out in all their glory.  The legs, not the pocket linings.  I would do the same if I was that shape!

We admired the view for a while as it was indeed a good vantage point.  Take note of the island here as there’s more on that in a while.

The green monorail arriving at the terminus, plus some of the many ships anchored 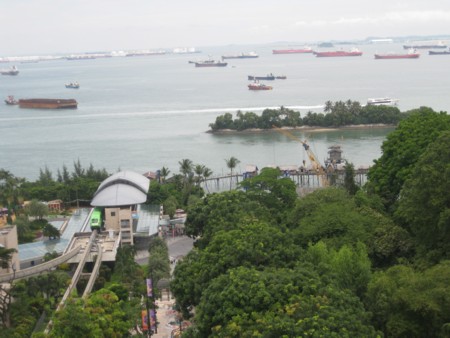 in the ocean.  There were more to the right and many more to the left, as far around as the harbour (see below) and beyond.

This photo (below), taken at 180° to the one above, looked back onto the mainland and you can see the blue, red and white structure that we presumed to be one of the rides in Universal Studios, though we did not see 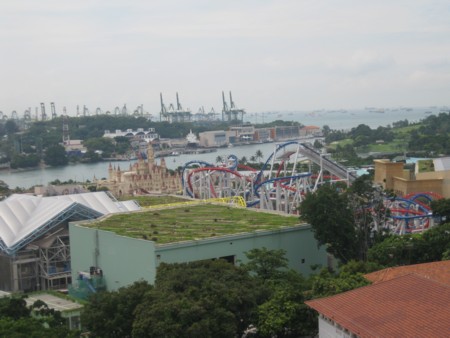 anything happening on it.  To its left is a sandy coloured structure and you may be able to see that it was a castle of sorts.  We were also fascinated by the grass on a few of the building rooves.  Growing the salad greens to serve in the sandwiches?  And of course all the derricks of the harbour beyond, with yet more ships misting into the ocean.  You can begin to imagine how many ships there were in the angles between my two shots and how many were out of sight of the camera entirely!  We guess that with no farmland on the island pretty much all of their food is probably shipped in.

David got sick of the view pretty quickly – he’s never good at just ‘being’, he’s got to be ‘doing’ so we went down in the lift and when we came out the lady was there and told us to put our magic coins into the mouth of a lion – there were 6 to choose from.  We both got a printout with a number on it and were instructed to redeem these for our special gift in the shop which was just through a doorway.  David handed over the vouchers, and I suspect that the numbers meant nothing, and we were given 2 black, solid (as in not concertina folded) fans with ‘Merlion Sentosa’ printed on them and a picture of the Merlion.  We’d seen the German family before us get a couple of fans and a couple of mouse mats and David was in desperate need of a mouse mat so would have preferred one of those!  We then heard the young child creating and it became obvious that she wanted a fan.  Opportunity knocks for David and he went and waved his arms around copiously in ‘giving and receiving’ fashion and assisted ‘International Relations’ as well as ‘Parents and Children’s Affairs’ and came away happily clutching a mouse mat, leaving a cheery child and relieved parents in his wake ROFL

For our next trick we decided to see the Butterfly Park.  Sigh!  Why do we do these things?  Not far from the Merlion was a signpost pointing yet further up the hill so we set off in that direction which involved climbing a decent set of stairs.  The man that had given us our gifts in the souvenir shop had said something about escalators to get to the Butterfly Park and sure enough, once up these stairs, we rounded a corner and were met with a sight that looked like something out of a film that would have Heaven at the top!  There were 4 escalators with brief paved areas between the top of one and the start of the next and it was quite a sight, stretching up what must have been 8 to 10 floors in front of us.  We went up 3 of them to find that the last was out of action with the left-hand side blocked off so that people going up and down had to squeeze past one another as they climbed or descended the hill manually.  They were steep steps and it made my head a bit dizzy using them as my brain knew they should be moving but they weren’t.

Once at the top we found a building, a large paved area, and a few bits that looked like information boards but they were not informative.  We looked around a bit but there were no other signs about the Butterfly Park, just advertising for the Singapore Image Museum, which was the building and they charged more money to go in.  Mystified, we decided we must have missed an arrow off one of the escalators so went back down again, looking carefully at every landing, but no.

We ended up exploring the gardens a bit and found a restaurant, which seemed like a good idea, but it was deserted.  We’d have liked to have been desserted – main course and dessert that is, but all was quiet.  We found a man who didn’t seem as if he’d wished to be found and asked what time they opened.  I think the answer was 5pm or something equally as useless to our cause.

We stood around, lacking in butterflies and lunch, and wondered what to do.  Our only choice was to go back up the escalators, including the stationary one with the horizontal technical expert who was either sleeping off his lunch; awaiting a long-time-coming spare part; or slacking off disgracefully.  At the top of the last escalator was a tiny sign with an arrow pointing right for the Butterfly Park.  Now why didn’t we notice that last time?  We’re both convinced somebody up there had just erected the thing!  A few steps further round there was another one!!!

Only a matter of metres further from where we’d stood half an hour ago, the top of the hill spread out and there were restaurants, cafés and who knows what that had all been hiding behind some bushes.  We saw a Subway and decided to lunch there.  A far cry from the restaurant menu items we’d drooled over half way up the hill but never mind.  But this Subway sold all the usual menu items except for the one that I like best so we moved on.  There was a pizza and lasagne stall and I asked if they had a vegetarian lasagne but the answer was ‘no lasagne today!’  Next to this was a halal ice cream stall.  They sold something meaty as well that I can’t remember because it didn’t appeal so we ended up with a tiny tub of ice cream each for our lunch.  The small round table we sat at declared ‘We are a HALAL certified permise’ (sic), which made me laugh and I took a photo of it to remind me.

So we’d gone from hopes of a nice restaurant meal, to Subway, to lasagne, down to a small, unaccompanied icecream.  Some difference!!!

While we were eating our ‘repast fit for a king’ (on a major diet!) we were sitting within inches of the Butterfly Park entrance so had no chance to get lost again.  Needless to say, we were photographed on our way in. 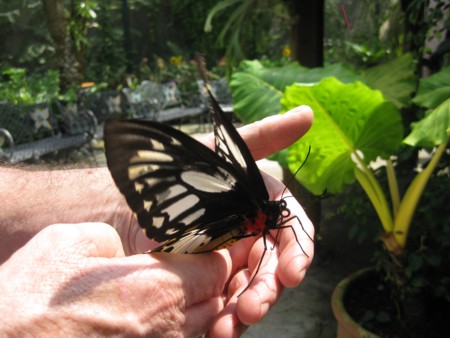 The butterflies were beautiful, colourful and huge!  We’d barely gone through the door (which was chains hanging in streamers that we had to push through) when a staff member put a massive butterfly on David’s hand and accidentally made him jump! 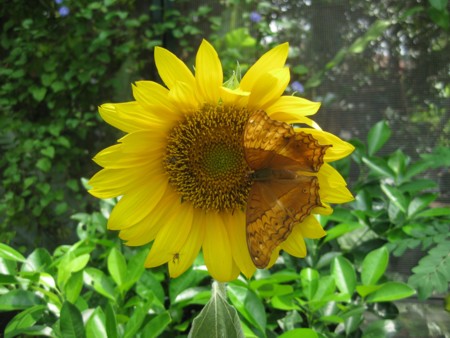 photos that David was practically pulling on my arm to get me to move along.

Also here, and seemingly very out of place, were 3 large cobras in a not-very-large bird cage!  With such beauty all around us we didn’t spend a lot of time looking at these fellows.

I’ll keep the butterfly pictures going even though I’m moving on with my words.  Through the next door, which had strings of something like plastic wine corks hanging down, was a display of macaws, sulphur crested cockatoos and other large parrots, but this was virtually guarded by staff and we could tell they were just dying to photograph us with the birds so David dragged me onwards quickly. 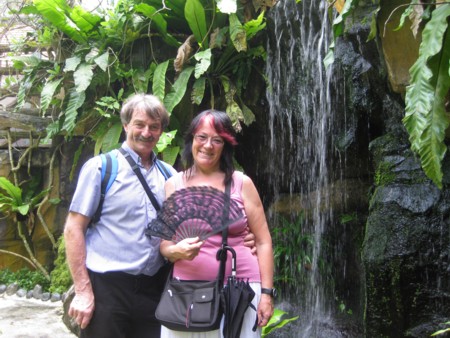 David and May with a Waterfall

There were a few gorgeous man-made waterfalls and someone offered to take our photo against one, which we gratefully accepted.

I’ll make the next picture as large as I can so you can see the number of butterflies that were in the butterfly room.  It was so beautiful I could have stayed there all day.  I can see 9 and 2 half butterflies in this picture. 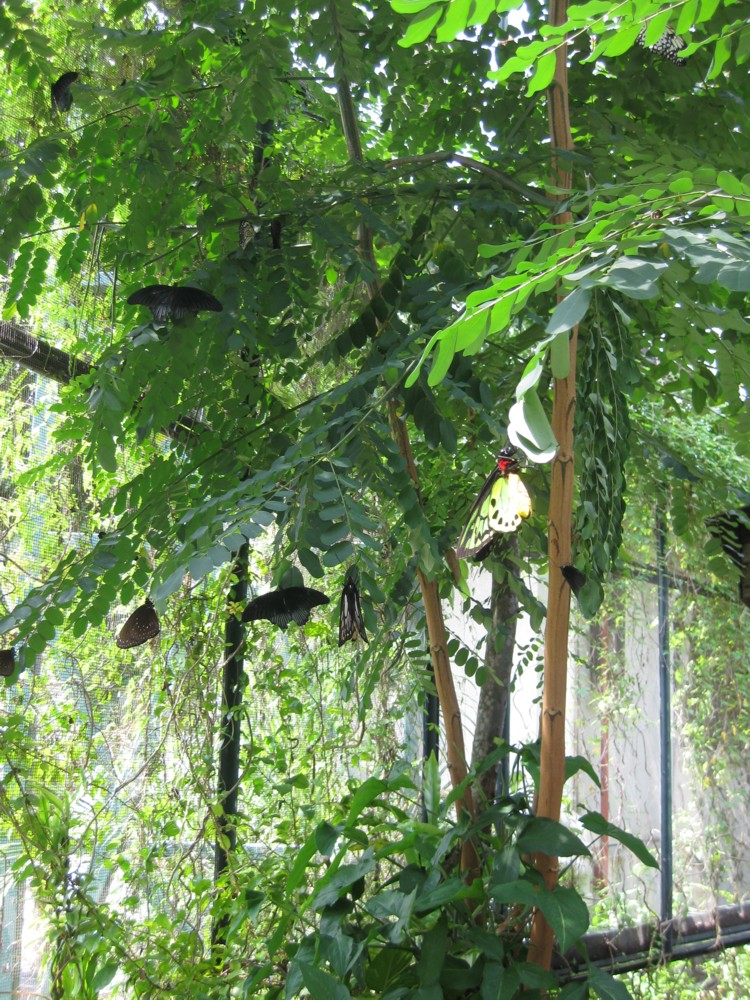