Turning right into Cross Street was *not* a clever idea. It was 5 past noon and the massively tall buildings (we found out later this was the financial district) were pouring out employees hot on the trail of lunchtime food or errands. Six to ten people wide on the footpath, striding purposefully towards us, we stood very little hope and just had to rely on being single file and standing our ground when we had nowhere else to dodge out of the way. I’ll be honest – I was appalled! Is it too much to ask that one person can head against traffic without being the victim of a veritable stampede? We tried to keep to one side but nothing succeeded.

At last we got level with the last building only to find the road walled off with temporary fencing for road works so had to come back around and find our way through the middle of one building to the far side. At last some space to breathe and not feel we were going to be trampled underfoot. Walking along the road a little and crossing over we found ourselves on the foreshore proper with very few other people in sight. What was in sight was the Marina Bay Sands Resort, the purpose of our pilgrimage.

Looking back on the financial district we’d just battled through we looked again at the size of the buildings and could well understand that if these were all full of desks it was no wonder we’d met so many people on the footpath and actually dreaded to think how many more were still inside! 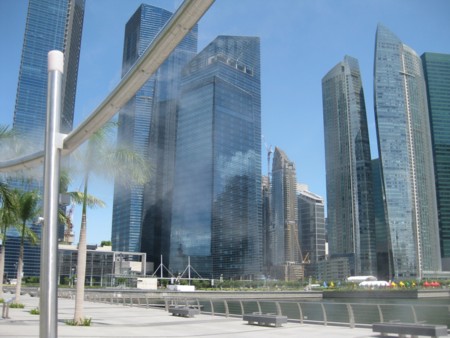 Singapore's Misting Sculpture with the Financial District behind

The other point of interest on this photo is the stainless steel piping which was giving out mist. The signs proclaimed that it was a tubulinear artwork (if I’ve remembered the term correctly) with the added bonus of bringing down the ambient temperature in its vicinity, which indeed it did, and was gratefully received because something else I have not mentioned is that we’d arrived from wintery Perth that was 6°C as we flew out of it into 31°C Singapore. 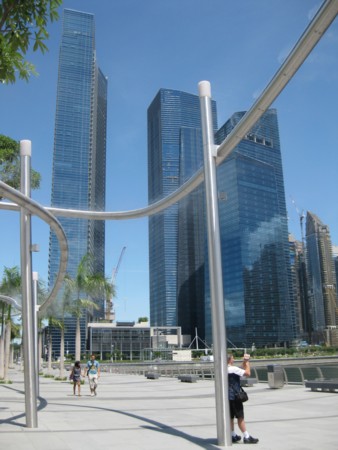 We absolutely adore tropical weather and never had a complaint about the weather at all but the humidity did mean plenty of soaking clothes. Nobody in Singapore needs a sauna and I’m sure all are healthier for it! But back to the subject, the cool mist was welcomed. Here’s a better photo of the mist tube disappearing stage left, with David leaning against it video’ing the Merlion across the bay. 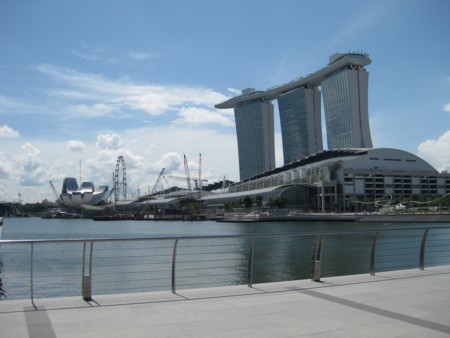 Actually, you can just make out the mist tubes on the right, in front of the lower building if you look for them. The low building was an entertainment complex, I believe and, on the left of that, you can see the Singapore Flyer (huge ferris wheel equivalent) which is not to do with the MBS. The flower-shaped creation on the left was yet to be finished when we were there but I think it was going to be an art and science museum or something. Within the towers themselves was a shopping centre but that was not quite ready to open either. The hotel part was functional though (2,560 rooms!), as was the casino. The casino had an entry fee of $75 per visit for Singaporean residents to dissuade them from gambling!

So we walked towards the towers and there were very few people – just one other couple in front of us, plus some workmen closer to the building itself. I imagine it will not usually be this quiet once everything is open. There seemed to be some things happening in the entertainment complex, though it was very obviously brand new. And so onwards, round to the tower entrance which was on the short side facing us of Tower One, shown on the right above.

Everything here, for obvious reasons, was on an absolutely massive scale! Inside the foyer was a hotel reception but we could see it was alright to bypass this and went instead to the scale model of the complex in the middle of the vast room to have a look at that. David videoed this and as I stood there I suddenly realised that the stringed instrument music was not piped, but there was a group of 5(?) girls there playing. Violins and a cello (or the bigger one – forgive my lack of culture!).

Above us, the centre of the tower was a void stretching up probably 20 floors and decreasing in width as it went. Hanging in the space was an immense wire sculpture that must have been at least 10 storeys high but it did not depict anything; just looked like a mass of wire sticks joined together randomly and hanging there precariously.

We walked through further, past a raised level café, some water features, the biggest ‘flower pots’ I’ve ever seen in my life, about 8 feet tall for a guess, with trees in them, and security staff standing by every lift. The second tower was hollow as well though in both cases there were obviously rooms on the sides, they just didn’t have a floor across the centre of the towers. And then we reached the third tower where all the activity was and to tell you the truth I couldn’t report whether this one was ‘hollow’ as well or not. What we did see was the corral queues that we had to join if we wanted to go to the top. And no price. You know how it is when there’s no price – if you have to ask you can’t afford it! We joined the queue to ask.

I am terrified of heights, and lifts make me feel motion sick, so you can imagine how excited I was about the thought of going up 50+ floors in a potentially supersonic lift, leaving my stomach behind and making my head spin for the next half an hour, only to spend the time up there in a flat panic if David stepped any closer than 10 metres from the edge. I was not enthusiastic! The queue moved fairly quickly and we got close enough to see that the fee to even go up there was $20 each. I said “Twenty dollars!!?!?!?” and David said “Well, you’d better decide ‘cos we’re next!” and I took a big brave breath and said “OK. I can do this!” David got his ticket for $17 because he’s 55, after proving his age with his driving licence to the lovely young Asian clerk who said he looked ‘too young’. A particular compliment coming from a young Asian girl we felt.

Next step was to find a loo as I had no idea how the lift was going to affect me and was very fearful it would make me sick. Another thing I’ve omitted, almost all of the public loos in Singapore have automatic flushing – usually while you’re still sitting there and definitely before you’ve used any paper! This one, as did quite a few others, also had automatic water dispensed from the basin taps and was very spiffy – as you’d expect!

And so I’d procrastinated as much as I could and off we went to the lift on, in my case, unwilling feet and trembling knees. A staff member politely ushered us, with one other man, into one of the lifts and I leaned against a wall of it. Even in the 3-floor lift in the hotel I felt better leaning against a wall than wobbling around in the middle and sending my balance AWOL so was very relieved this lift was empty enough that I could have a wall. And do you know what? I barely felt it move. I could feel the slowing towards the top but it was perhaps more gentle than the aforementioned 3-floor lift in the hotel. I was so relieved!!!

We stepped out at the top and were ushered through a door to the observation deck – the ‘boat shape’ on the top of the 3 towers – and I marched straight out to the glass wall and was completely over-awed by the view. I was stunned, as was David. “Look at me!” I declared! “Yes, wow, look at you!” said David. My knees did feel a little jelly-like but my head was clear and happy and just amazed that I was up there and by how incredible the view was. 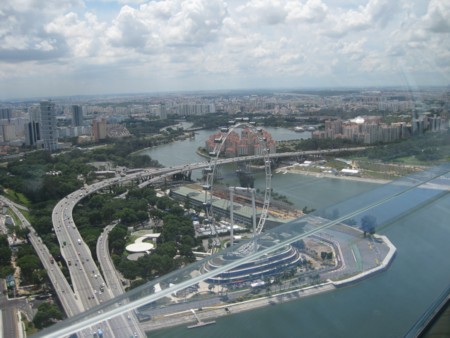 The view was beyond spectacular. I have never before seen so many tall buildings. I have never before been so high, unless flying. We could see the whole of the city centre and all of the housing development apartment blocks beyond. It just went on and on as far as the eye could see. We were both so amazed. I was even able to look down at the entertainment complex just across the road, though I did not look straight down to the ground. No point pushing my luck! I took a heap of photos and David gave the video camera a good workout too. I don’t want to bore you with them all but here’s a few… 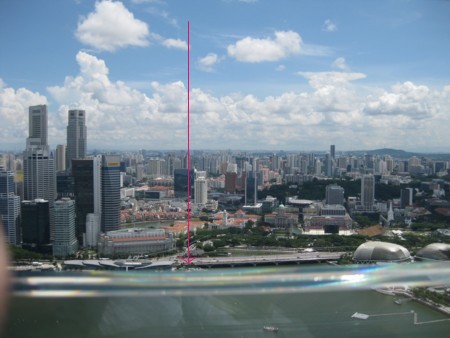 I accidentally hid the Merlion with the edge of the glass but he was where the arrow points.

While taking these two photographs above I was out on the tip of the Skypark, jutting forward about 60 metres from the tower it’s attached to and with nothing 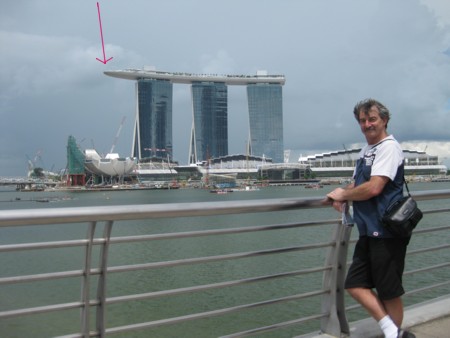 underneath it for support other than the cantilever principle.  Little me, standing on the point of something remarkably heavy that has no visible means of support. I’m still stunned that I did it.  And more than a little pleased with myself.