Soooo wonderful not to have to race around to catch a plane, train, boat or any other form of transportation organised by others!  We woke around 8.30, had a couple of cups of coffee, packed the final items that we wanted, and toodled away around 10.30am.

As David drove, I had a plentiful supply of crochet wool in a small carrier bag as well as bulging from the top of my backpack-style ‘hand’bag.  I always enjoy being productive if that’s possible while I’m being chauffeured, and this was to be a fairly decent journey so hopefully I’d get plenty done. 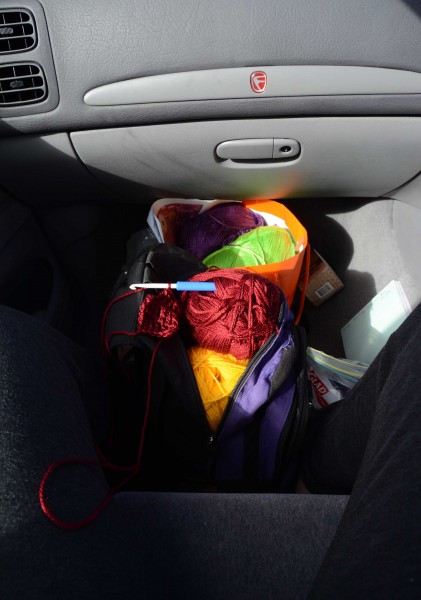 We live very near to the northern-most end of the freeway and headed south along this very familiar route.  The morning traffic was long gone and we sailed along happily at the 100 kph speed limit, reduced compulsorily to 80 kph for the city stretch, and then off again at 100.  You’ve truly got to love Perth’s freeway.  Once south of the city we began to travel through suburbs we’ve not been near in years and we ooohed and aaahed at how many new suburbs and businesses there were down there.  Then the freeway speed limit increased to 110 kph and it was then we knew we were through suburbia and heading for the next (much smaller) city of Bunbury.

I was happily crocheting, and David took no notice at all of what I was doing.  Why would he?  After we’d been driving for around 90 minutes there was a sign saying 65 kms to Bunbury, and a roadside ‘facilities’ block, of which we decided to avail ourselves.  By now I’d crocheted a smallish burgundy ‘ribbon’ and a yellow flower with a white centre, and was just attaching the two.  We’d travelled 175 kms. 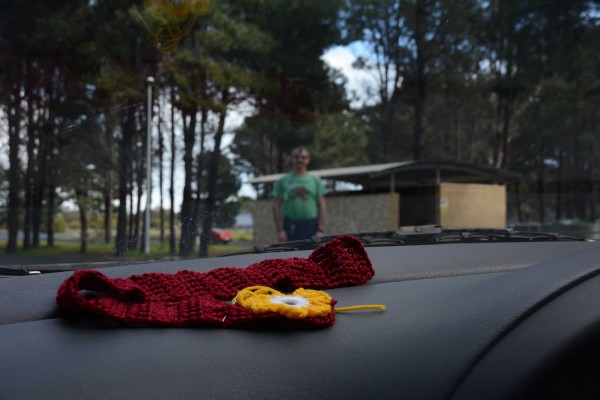 Back on the road, skirting Bunbury via its bypass and we needed to take a left.  Our first turn since getting on the freeway!  Along this road for about 5 minutes and then a left and a quick right, now heading towards Wellington Dam.  Another 5 or so minutes later and we turned right into a road with the Dam signposted.  It could hardly have been a more straight-forward journey.

But wait, there was a side street pointing to Honeymoon Pool, and we can never resist seeing what there is to see.  The road quickly became gravel with a couple of steep downward hills, but it’s been a while since we ‘went bush’ so I tried to be brave.  There had been no warning signs about the road so it had to be safe, right?  Actually, I think it did say ‘No Caravans’. 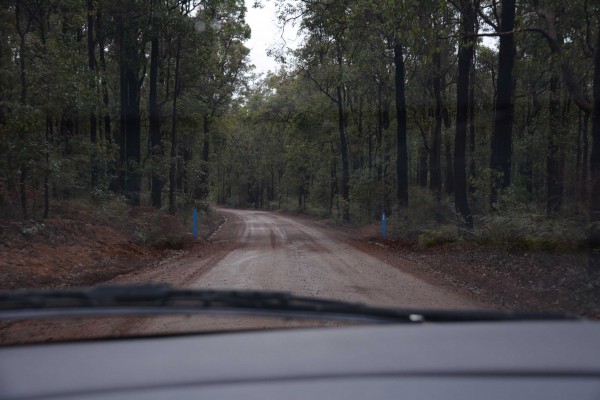 I’m not really sure how far we went.  Probably not a huge distance, but I think we were both wondering if we should turn back and just stick to plan.  But I’m glad we didn’t because the short turn-off to Honeymoon Pool arrived soon afterwards and it really was pretty.

There was one other car there with a man BBQing something amidst clouds of smoke – presumably from burning wet wood.  There were 2 children of around 12 with him and we exchanged cheery smiles and a wave as David drove a little bit past and parked the car (who is named Monty, to save me typing ‘the car’ all the time).  The ground was wet, and muddy, but we were kitted out with a new pair of wellington boots each and had packed them close to hand.  We changed into them, feeling kind of proud of ourselves, and grabbed the cameras. As David stood on the bottom step of this structure he said he could feel that the water was freezing through his wellies.  When I stood there afterwards I couldn’t feel it to start with, but once the cold got through the rubber… bbrrrrrrr!  The structure also moved a little, so my vertigo and myself didn’t stay on it very long. We’d just started to explore and take a few photos when the rain came down.  I doubled over to protect my camera, holding it near my waist.  David sauntered around without a care in the world for his.  How can we be so different?  But either way, we headed back to the car with some degree of haste.

Honeymoon Pool is a camping area with maybe 10 little dirt squares suitable for a tent, and 1 toilet block of very rudimentary style – 2 for each gender, and all equipped with plenty of fresh, cold air, spiders’ webs and residents thereof.  I think these must have been septic tank toilets because I can’t remember it being a drop toilet *shudder*.

The time was now 1.10pm, we’d travelled 258 kms and were rather hungry, but off we went to actually get to Wellington Dam.  As we were just leaving Honeymoon Pool we saw this.  What a gorgeous sight!  Perth just is not that green. 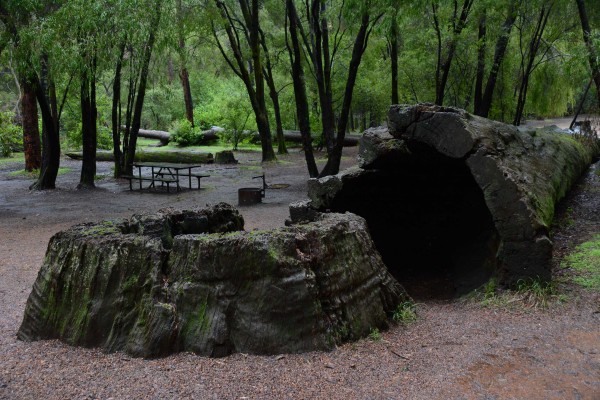 Wellington Dam was easy to find, it was the only place that the road led to!  We got out of the car, took a photo each and then shot back into the car again.  If the photo looks dull and wet – it *was*.  The rain suddenly poured down and the bitterly cold wind blew along with it.  David asked if I wanted his weatherproof work jacket so that we could at least see the Dam now we’d travelled all this way to do that.  Yes please!  He did have a jacket for himself too so I wasn’t being selfish. 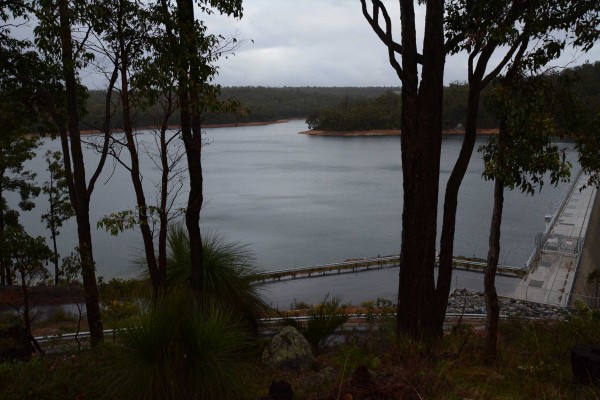 The rain eased and we got out of the car and put the plastic gear on fast.  Another couple pulled up in a van and we had a quick chat.  They asked us how to travel north from here and we asked them how to travel south.  No options for either of us.  Just follow the road in the same direction you had been heading!

I kept saying to David that I’d thought there would be a kiosk here to buy at least a sandwich, but we saw nothing like one.  No other car or person except for the other couple.  Well I’ve just seen on Google maps that it says ‘Wellington Dam Kiosk’ and there’s a sign for food, but I’ve no idea where it was hiding this day.

We did wander around a little and took a few photos.  There were some steps down to the right to get to a viewing platform with some information posters.  What do they call those these days?  ‘Interpretive Centres’.  Oh please!!!  How pretentious!  Looking to the right, a little beyond the Dam wall, we could see a horrible old rickety bridge.  With the scarcity of roads around here, I reckoned that was our way forward.  David did not. 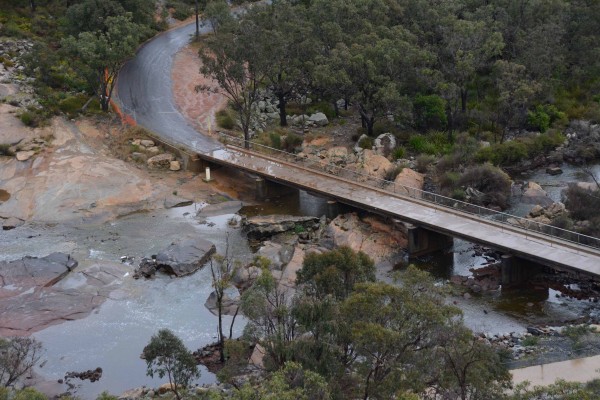 It really was cold, it looked as if it could rain hard again any moment, the wind was still strong even if the jackets were protecting us from the worst of its bite, and I was doubting my sanity in suggesting a southern holiday in winter.  Sshhh, I didn’t dare say this to David!

Back up the big, stone steps to Monty and then driving down a bit of a hill to be presented with… yup, said bridge.  Fortunately it wasn’t scary at all, even though the Dam was full and if the wall had failed… Tee hee!! Guess I had some raindrops on my camera (top left of shot).  Although the photos you will see here are a mixture of David’s and my own, I know for a fact I took this one because David was driving.

We continued on, totally unsure if we were on the right road or not.  I’d printed out thorough instructions and maps a week before we left home, knowing that there was no phone or GPS reception in the areas we would be visiting, so we had no choice but to carry on, despite a complete lack of road signs.  That’s what we always did in the days before these electronic devices!  We had a couple of T-junctions where the roads were named differently even than the 2 options I had for each on my maps, but we made our best guesses and finally there was a sign that said ‘Wellington Mill’ and ‘restaurant’ or was it ‘café’?  We were both hungry, not having eaten anything all day.  The sign did me a favour because it also had the name of the secret on there, but David didn’t notice it – phew!

We drove to Wellington Mill; a teensy, teensy place with a few houses on acreage and a tourism board.  I got out to photograph a lovely narcissus by the side of the road and David said he’d go look at the tourism noticeboard.  “No!  Stay put, I won’t be a moment” says I, knowing that the tourism board had also mentioned the secret as we drove past it.  Fortunately David is not drawn to print the way I am and this second mention had also gone unnoticed.  That probably means he’s a safer driver than me.  Or does it? 😀

And off we went again, this time, unknown to David, for a very short drive indeed.  We came to a small roundabout at a 3 road junction and David looked and saw… “Oh wow, look.  There are some garden gnomes on the roundabout!”  Then we both looked to the left and our jaws fell open.  I’d been expecting this.  I knew somewhat of what we were about to see, but never, in a million years, did I envisage the sight that was before us. David parked Monty alongside another 6 or so cars and a minibus and we put on our wellies once more and took the cameras for a walk.  The cameras earned their living!

Firstly I showed David what I’d been crocheting on the way here.  If you come to Gnomesville (yes, the signpost is wrong, there’s an ‘s’ in it and it surely *is* plural!) it is suggested that you may wish to bring a gnome to leave behind.  Well I’d made a tiny scarf with an applique flower as our contribution.  And for those that know me, I do nail art, often with a relevant topic, and this time I’d painted garden gnomes on my fingers.  David hadn’t thought anything of that either, but he certainly knew the reason now!

We smiled at the other people there as we passed on the paths, and not one of them smiled back. How on earth can you be at Gnomesville and be miserable??? And now you want to see the gnomes don’t you?  Then I’ll let you do that with no chatter from me.  Just please know that this is a miniscule selection of the jaw-dropping whole. 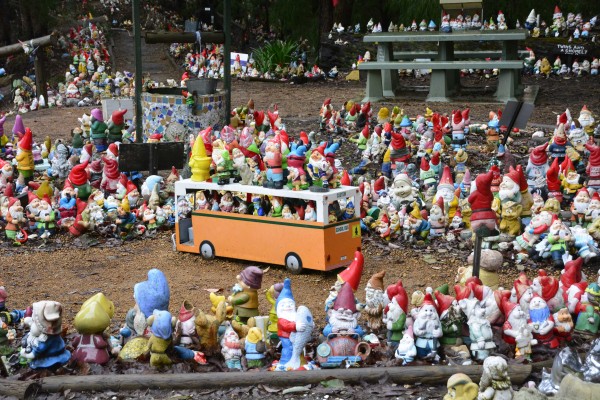 More than Gnomes at Gnomesville 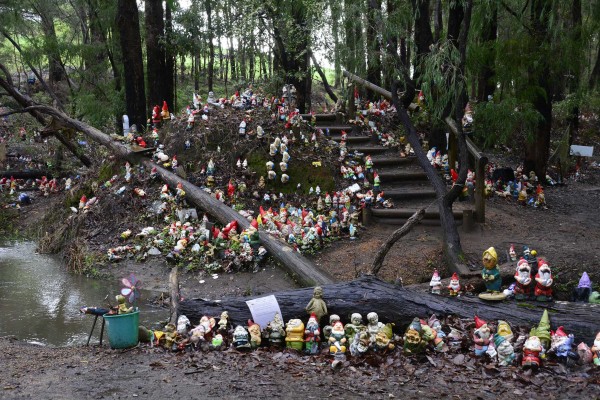 Gnomes on a Hill 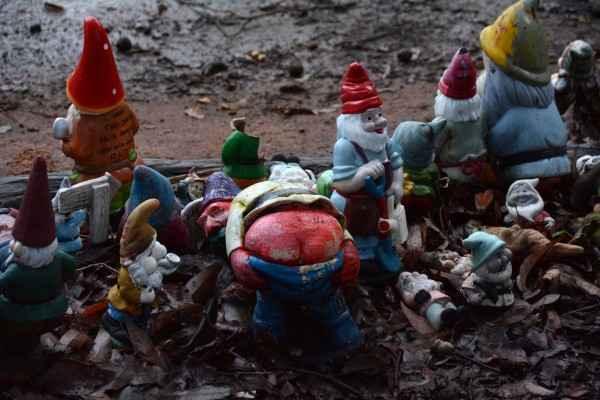