Before we knew it, it was time for the Captain’s Dinner (the one for the 3 day cruise, we’d already had one for the 4 day cruise) and we went to get showered and changed.  Here’s a photo of the 3-day crew. 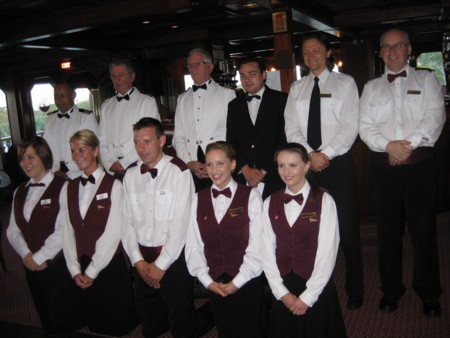 Brett the lovely engineer back left.  1st Mate then Captain, Gorgeous Jason in the black jacket.  Alex on his right and boo hiss Andrew the weak cocktail maker on the absolute right.

Left Emma who was gorgeous – one minute she sounded Irish and the next Scottish – usually I can pick accents but she had me confused.  Next to her the totally adorable, wonderful, gorgeous Joan who David and I both wanted to bring home and next to her Ben the top-notch barman.  Then Nikki and Annie, both of whom we didn’t get to know so well.

We had the captain on our table again.  We’d had this one for a lunch as well.  What can I say?  He had good taste! 😉

Here’s Donna, Ben and myself and the note Ben wrote for us both hehehe  He’d sent it to us along with the delicious PP drinks and it says 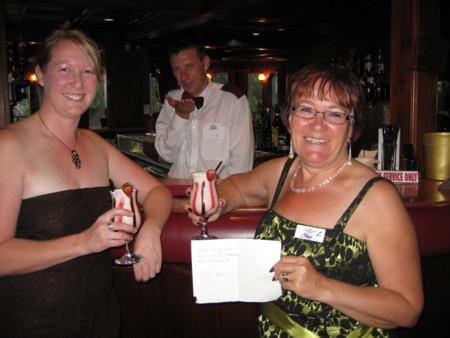 Donna & May with Ben the Barman

‘Made with love for my 2 favourite sexy passengers ? Ben’

What can I say?  He had taste too LOL  And Donna asked for, and got, a copy of the recipe for the drinks 🙂

We spent the evening chatting at the table and the captain spent a lot of time with us.  I selfishly would have preferred if he hadn’t and we could have spent our last night with our friends but never mind.  He was a really nice man and not only interesting but humorous too so he’s well forgiven.  Poor Donna, who hated dancing, got asked by the engineer, Jason and the captain and I took photos just to add to the stir.

I had definitely put on weight and went and changed into something I could breathe in before long.  That dress had been loose on me before we went away!

Alex started to play a slow dance so I dragged David up to the dance floor but he was being all unwilling and I had bare feet and was worried for my toes so I stood on his feet, as children do, for him to do the moving but we nearly toppled over.  Then we were both being silly and were laughing so hard I could barely breathe.  In the end he was moving backwards while I had my arms clasped around his neck with my body on an angle and my feet dragging behind me.  We were the only ones on the dance floor so I guess we were rather noticeable tee hee!  What the heck, we were enjoying ourselves.

David and Donna went up together to pay their bar tab for the week and it was very close indeed.  We’d outspent her by about $30, but both of our bills were over $300.

People began to drift to bed after this but we didn’t want to close the door on our last night and went to the small bar where all the staff were having their nightcap.  They welcomed us with open arms and we talked and laughed with them until about 11 pm.  It was a very good time.

When we eventually went to our room there was a note on our pillow with the chocolates which said ‘Thanks for everything guys and have a safe journey back.  Joan’.  How lovely!  This had been her first trip as a staff member so we’d been new to the boat together and managed to make it special for each other!

Before I start my report about Monday I should say that we pretty much packed our cases before going to bed on Sunday night so that we could be relaxed and at peace in the morning.  Nobody wants to rush on holidays!

We awoke with a sense of loss.  We began as usual with our cups of tea and some biscuits to tide us over to breakfast and then showered, sadly packing the last of our things.  We had to leave our cases outside our cabin door before breakfast but could leave our hand luggage in the cabin.  Even so we got back to find the room made up for the next people.  In a strange way this made it easier as we knew it was someone else’s turn to be spoiled.  Even the toilet had its little ‘hygienically sealed’ piece of paper over it so we needed to use the ‘public’ one on the dining room level.  We left one cabin key on the dressing table and the other in the outside lock of the door as instructed.

When we got to Mannum we could see one of Heather and Ray’s daughters at the wharf waiting for them.  They seemed like a very loving family indeed.  And then of course it was time to disembark for the last time.  We had a red carpet to walk along and the senior officers were lined up along it to say farewell.

We shook hands and exchanged polite words with Brett the engineer, Keith the second officer, the Captain… and Alex – oh gosh, what do you say to the man David had poked fun at for the past 7 days?  And then came Jason who gave us both almighty hugs.  I squeezed him tight and said “If I hold really tight then you’ll have to come with me!” and did little sideways steps dragging him along.  But then we both laughed and David dragged me away to the waiting bus.

There were more of us going home on the bus than had arrived on it – about 20 of us I think.  We had a different driver who I much preferred to the outward bound one.  This guy was younger and his commentary sounded more for our interest and benefit where I’d felt the outward bound driver was just trying to impress.  OK, show off is a more truthful term.  Anyway, that’s just my impression.  I also felt safer with this man’s driving yet I couldn’t specifically tell you what was wrong with the other, just that I knew I was glad to get off.  This driver told us roughly the route we’d be taking, which was different to the way we’d come.  Lovely, new scenery!  And the best news of all was that we’d be going through Gumeracha.  I had wanted to visit Gumeracha as there was a toy factory there where they made wooden toys and they had a giant rocking horse out the front that it would have been fun to see but there had been no way of getting there via public transport during our week in Adelaide.  I really hoped that we’d pass the rocking horse and be able to get a glimpse!

The driver told us a little about the history of each town we drove through but as we rocked along I felt so very tired.  Too many late nights, early mornings, and the hard bed caught up with me all in a rush and I leaned onto David’s shoulder and shut my eyes.  Just for a tiny minute!  And then I suddenly heard someone snore and sat up.  It wasn’t me!!!  David must have been playing a joke hehehe.  OK, it was me!  He said I’d been asleep for quite some time and though I felt better I’d have sworn I was only resting my eyes.  But he says I went limp for ages and I guess you trust the one with open eyes 🙂

After we’d been in the bus for about an hour I was just starting to wonder how long it would be until we got to Adelaide and a loo when the driver told us that we would soon be stopping for a quick rest break and time for a cuppa if we wished at… The Toy Factory in Gumeracha!!!  How wonderful.  I was so pleased.  Gumeracha is pronounced gum-mer-akka if you even care. 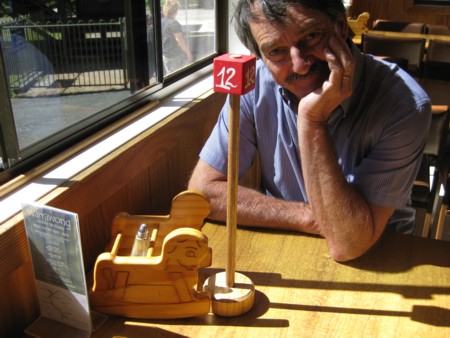 Everyone bolted for the loo but David found the original 2 outhouses a few steps away and we went to those.  We were then first in the queue!!!  And then we went to the café for a cup of tea each.  The table numbers were children’s wooden painted building blocks and the little condiment holders on the tables were miniature pine rocking horses but the best one was the view from the window. 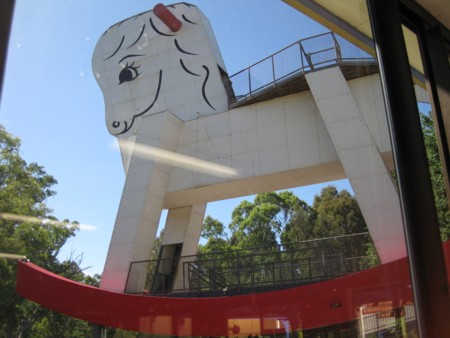 If you doubt the size of this fellow you can see how the front of the rocker compares to the normal sized one the man is riding in the second picture! 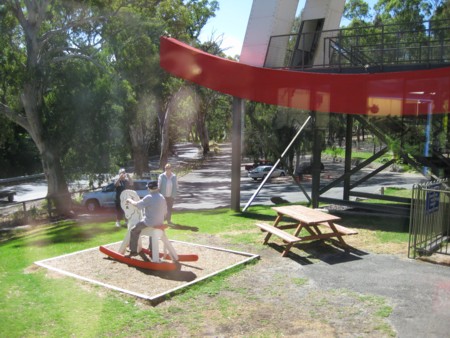 Apparently this is the biggest rocking horse in the world.  You could climb up 2 lots of stairs to a viewing platform on its back but had to pay for the privilege.  You can see the doorway to the second flight of stairs in the front right leg of the horse.

We managed to drink our tea and still have a few moments to look around the toy shop.  There was no sign of being able to look at the working factory as I’m sure I’d read that you could.  There was everything you could think of made of wood, and more!  It was interesting to look around and we knew we were OK for time as the driver was still in there as well.

We didn’t buy anything but it was interesting to see and then David noticed the driver had gone so dragged me, almost literally, quickly out to the bus.  We got ‘the look’ from those already seated but, truly, we knew the driver had only been on there himself for moments.

On we drove, through the beautiful green of the trees, the narrowish (but safe feeling!) roads meandering through the hills and the sporadic towns, listening to the driver’s comments on each.

The scenery was beautiful and we went through the Chain of Ponds National Park and saw the reservoir where, the driver told us, there was a small town, complete with church, at the bottom!  The top of the church spire was even under water.  I had known of the National Park here because I’d been asked for it at directories so was very happy to have seen yet another place I knew of.

After a while the roads got wider, busier and the houses more frequent.  And then the shops and businesses started to appear and we were back in the suburbs once more.  Even here the driver continued to tell us interesting things and he even pulled onto a bridge and stopped, telling us about the O-bahn below us, and waited until a couple of buses had passed underneath so that those who had not come across it before could see how it worked.

I kept a track of which suburb we were in by carefully reading the business names, again so I knew I’d been to places I’d been asked for at directories.

We dropped off one couple at a hotel nearer to the Casino than ours and then went around to the Rockford where everybody got off.  I won’t tell you about my behaviour in the queue to be given a room, David thinks I behaved badly, I know I was just not letting a man push in ahead when I’d been there first [May whistles skywards].  It’s my ‘thing’.  I’m a loveable, gentle, kind person, but don’t push in front of me in a queue!  I didn’t say anything, just protected my position LOL