Thursday 12th 5:30 alarm, and you know the routine.  The swizzle stick end was still serving us well and there was going to be enough bread left for tomorrow’s breakfast before we caught the bus out.

The coach was not only quite late, but we then saw it drive past.  I sent David in to the hotel to ask them to ring AAT Kings to make sure that we hadn’t been forgotten.  He eventually came back and we were expecting, after yesterday, that this was going to remain the Kakadu trip coach.  We chose the VERY back seat which turned out to have double the leg room of the other seats and had shoulder room either side too.  There was enough room to have our backpack next to my seat instead of messing around with the overhead luggage rack too, which was nice.  Yes, we were staying on this coach – good.  We resigned ourselves to the wait for getting off each time because, as far as we were concerned, we had the best seats in the entire coach!

A little way out of Darwin, along the Stuart Highway, we took a left turn.  This is worthy of note, because the other 3 days [2 on a coach and 1 in the hire car], we had gone straight up, and were getting rather used to that piece of road.  Now, we travelled along the Arnhem Land Highway.

The first stop was at a really interesting place called the Bark Hut.  I had read about this in Jock’s brochures* and expected an historic type of building made of bark.  It was actually a very large pub, and even at this hour, 9am or so, it was doing a roaring trade.  It had all sorts of fascinating things up on the walls and I could happily have spent quite a while reading posters etc.  However, this was just a breakfast/morning tea stop so we bought a yummy bacon and egg burger each and made do with the little time that we had.  I really hoped that we would call in again on the way home.

*  Jock is a driver at the bus company with David who had come down from Darwin to live in Perth for family reasons.  He doesn’t really like Perth weather and can’t wait for his wife to ‘allow’ them to move back up again.  When we were deciding where to go for a holiday, it was his enthusiasm to David that cinched it for us to go to Darwin at all.  Jock [Herriott, and yes his name is James.  Really!] used to be a tour coach driver up there and lent us 2 arch lever files full of ‘driver instructions’ and tourist brochures and a video so that we could swot up before we got there.  “Oh” says David “My wife will love to read those!”  I used to love reading – anything so long as it was in print, but I’m so not into reading everything any more.  Sigh!  Anyway, I ploughed through it all and it was very interesting and I was even able to fill David in on a few gaps that the drivers didn’t tell us while we were touring, so it was worth it.

We then all loaded up on the coach again and headed into Kakadu proper.  The highway goes into the park, like it or not.  If your destination is beyond that, you have to go through.  Eventually, there was a side turning which we took, and that’s where the toll building was.  The driver went in and, I suppose, ‘declared how many passengers he had on board’, and we were given a ticket and brochure/map each.  Along the sides of the road now were regular massive flat sections, almost as far as the eye could see in some places.  These are flood plains, with the road raised only a matter of a few feet through the centre of them.  The driver told us that the road is shut often in The Wet.  We went over bridges for 3 rivers which all looked harmless enough at this time of the year.

Then we arrived at our first destination for the ‘Yellow Waters’ cruise.  You could see why it was called that.  The water really was tinged yellow somehow.  The boat was very similar to the Katherine Gorge one, so doesn’t need describing, except this guy didn’t have a microphone, so we sat at the back, near him, to hear what knowledge he had to impart.  We hadn’t gone very far at all when we saw a crocodile.

Now this was a big one, and in tidal salt waters so watch your fingers!  Apparently if the croc is in the water you can tell how long he is because they are 7 times the length of their heads, from snout to ‘ears’.  And, we were told, for each croc that you see, there are 13 more that you don’t see.

We saw lots of long legged birds and a floating field of lovely lotus lilies in bloom.  Again, there were massive flats on one side of the river where it spills over.  There was river debris up in the branches of the trees, about 2m above our heads, showing the high tide mark from last season.  Bearing in mind the size of the flood plains, there must be unbelievable quantities of water.  Darwin does not suffer from water restrictions at any time of the year as Perth does.  It is no surprise.

We were on the cruise for an hour.  The guide was very relaxed, and frequently turned the engine off so those at the front could hear what he was saying.  We saw several crocodiles about 2 metres long each, and an egret that had just caught a fish.  Their feathers are not water-proof, so they have to take the fish to land quickly before the weight of the water keeps them from flying, then eat the fish, and then ‘hang their wings out to dry’ before they can fly away again.

Then back to the coach again and on to the park centre for lunch.  This time we were booked in and had an area reserved for us with jugs of iced water and glasses on the tables, and a cold meat and salad buffet.  This was nice too, and this time we had lovely coffee freely available instead of the box drinks.  We were a little rushed again, but I just managed to finish eating, and justified my cuppa time by the fact that we’d been last off the coach and therefore last in the buffet queue, so if the people who got off first had to wait a few minutes for us on the coach it would not hurt them.

After this, we visited a building which was shaped like a turtle – so they tell us, the trees were up around it and there were no hills to climb to see.  But the inside was interesting.  There were lots of displays about Aboriginal culture and history, although it was a shame to be part of a coach load because everyone was there at once trying to see.

Then on to see the rock art.  We travelled from the flat land of the water country to an area where there were huge red-rock cliffs rising up.  Kind of like a mountain range but without the ‘rolling sides’ of hills – just sheer cliffs. 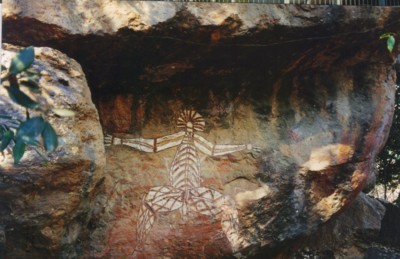 These paintings are thought to be up to 50,000 years old.  There were a lot of them, under a massive overhang of rock, and each had a story to tell about the Aboriginal beliefs of the creation.  We had to walk along wooden walkways with side rails to keep us at more than arms length from the works.  I don’t blame them.  You could also see little white trails along the rock in some places which was silicone, put there by the 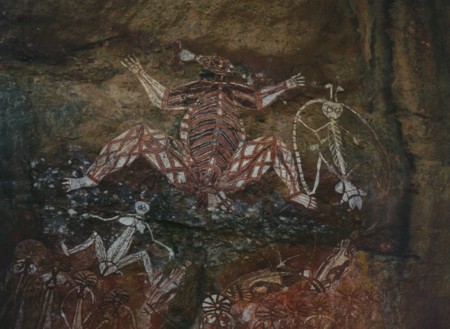 rangers to stop water flowing on to the pictures and washing them off.  I guess rain these days holds some nasty chemicals that it didn’t used to!

Apparently there are some tribal elders who have achieved certain levels of seniority and importance, and have artistic ability, who are allowed to touch up the paintings occasionally.  This has been part of Aboriginal culture since the paintings were first done.