Starting a new story is always a bit daunting, but David has gone back to work this afternoon and I’ve dithered around for a bit, putting it off… But now is the time to share the adventures of our holiday to Tasmania.  Why Tasmania?  Well, we’ve been to all of the mainland States of Australia now – except for the ACT (Australian Capital Territory), which we don’t count as a ‘real’ state anyway.  It’s tiny, it’s full of our federal politicians, it’s cold – enough said!  Tasmania has a reputation for being a bit chilly too – even in November, when Australia is supposed to be warming up for the onslaught of Summer from 1st December.  But it had to be done, and we were curious.  Everyone says how beautiful Tasmania is, so… off we went!

We had packed our bags using our trusty packing list during Friday afternoon and gone to bed early ready for the alarm to ring at 4am to begin our adventure.  Why oh why do our flights always involve ungodly hours of the night?  I’d spent a week bringing my bed-time time forward from the usual 2am or 3am so that I’d be able to awake so early without feeling jetlagged before I even got on the plane to go!  Poor David had been working until Friday night at midnight so had only had one day to adjust, but he does that so much better than I do and assured me he was fine.

Off we drove, on the relatively empty early-Sunday-morning roads, to David’s parents’ and quietly parked our car in their driveway.  We’d given them a key the day before, should they need it.  And we waited for our pre-booked taxi to arrive.  It was supposed to send a text message as it was on the way and as the time passed and still not even a text I was starting to get a bit edgy.  5 minutes past the due time though we finally got the text – just as the taxi was pulling into sight anyway.  Why bother???  However, the journey to the airport, our check-in, and indeed our flight all went really smoothly and we had no complaints at all as we landed in Melbourne.  The 3-hour flight had taken us 6 hours according to the clocks.

We had barely found our boarding gate before they called our flight to Hobart, so the timing there was perfect.  This flight was a little over an hour, so just long enough for a drink and a couple of biscuits really.  It was a little bumpy, but not enough for the staff to be asked to sit down so all was well.

Having landed in Hobart – oh how lovely to be ‘domestic’ and not worry with customs and all that nonsense – we soon found the car rental office and were quickly sent away with the key and told where it was parked.  It was a dear little silver Nissan Micra that revved like no tomorrow, but got there eventually.

I typed the name and address of our hotel into my phone navigator and the kind American lady gave us directions of where to drive; mispronouncing all the street names along the way.  We were soon on a highway with a speed limit of 110 which was a surprise – the top limit on any road in Perth is 100 kph.  The poor little car was fine unless David put his toe down just a tad on the accelerator and then it would scream back a gear which made us both uneasy until we realised that this is just the way the car was.

The speed limit dropped to about 80 as we went down a hill and, just as we started to go uphill a bit towards a massive bridge, I yelled at David “NO!!!  The light’s red!!!”  We’re accustomed to traffic lights standing on poles, left, right and centre on the road.  We’re accustomed to wide white lines painted across the road where you need to stop if it’s red, but this had nothing of the sort; just an overhead framework with a red light for us and the lane on our right.  The 2 lanes to our left had green lights, we were all heading in the same direction and there was NO opposing traffic for miles around.  We were absolutely *stunned*.  And yes, David did manage to scream to a halt, about 2 car lengths beyond the lights.  We looked around trying to figure out what on earth this was all about but still to this day have no idea at all.  He decided that the best idea was to change (when it was clear and safe) into one of the left lanes, which he did.  For myself, I just wanted to get out and walk the rest of the way, but I was brave.  I’m a very nervous and overy-attentive passenger – if I’d only just seen that light as we went under it, then it really was a trap for all those unaccustomed to such things.

Only a very short distance later, after a wonderfully uneventful left turn, we reached the Hobart docks and our hotel.  We had to drive all around the block finding somewhere to park and then it was paid parking so I stayed in the car while David went and checked in and gained access to the hotel parking that we’d booked.  Thank goodness we had such a tiny car because the ramp to drive into the garage area was quite steep and the post where he had to put our access card was incredibly close to the roll-a-door.  We’d have hit the door in our own vehicle before he could have reached the card swipe!  He was also shocked when he took his foot off the brake that the car rolled backwards

The hotel layout was really odd in that from the garage we went into a single loooong corridor with the entire floor’s 20(?) doors along the far side.  The hotel only seemed to have 2 floors so there was another, identical, below it.  David had needed to lift 4 laundry bags onto a trolley so that we could even get into the door in the first place!

Our room was number 13 – lucky we’re not superstitious!  It had the bed, a desk and single chair, a high bench with 2 bar stools, a little kitchenette with the fridge far away from it, and a ‘too high to sit comfortably’ bench with cushions on it.  In the bathroom was a washing machine that could also tumble dry, a basin with no room to put anything on it, a tiny, really high, but fortunately glass shelf that was right above the toilet so that if you left the toilet lid up and accidentally knocked anything off the shelf, you’d have seen the last of it!  I could only see the things I’d put up there by looking through the glass from below!  And a shower.  The shower, (may as well say now and get it done with) was actually very good – plentiful hot water, not right in my face (which I detest!) and, despite the warning sign that we only had access to 72 litres of hot water, never let us down.  Oh I would have forgotten without the photo – the bathroom mirror was made up of smallish squares so you had to make sure you’d got your whole face in a square to do make-up or, apparently 😉 shave. Have I sunk to a new low having a bathroom photo as the first in my story? 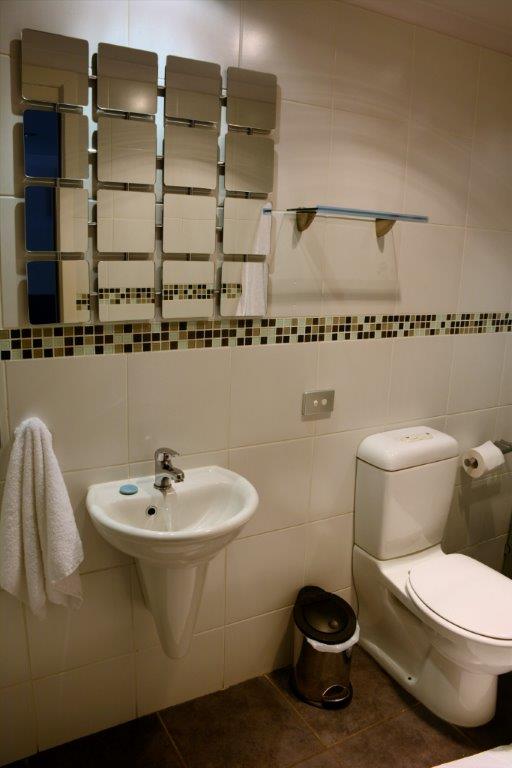 Ha!  I suppose before I climb out from the barrel of mentioning unmentionable things I may as well tell you this too.  The first thing I really noticed about Tasmania was that there were only 4 toilet stalls in the ladies bathroom at the Hobart Airport.  Yes, *four* stalls!!!  And of course this is always the place everyone rushes to the moment they get off a plane.  It was a loooong wait!  The second thing I noticed – and rather a rude shock it was – is that the toilet seats, all of them, no matter where we went, are *freezing cold*!!!  And the third thing was that the water out of the taps is so cold that it’s a wonder it actually pours rather than ‘clunks in chunks’ out of the spout!

Right.  Now I will be demure and ‘proper’ and only talk about the exciting things that we did and saw 😀

We pretty much dumped our suitcases in the room and went out to explore before it got dark, and wandered around the dock – which is prettier than it sounds and there will be photos soon.  There were several restaurants along the dockside and we eyed them up hungrily, having only eaten breakfast and a small snack on the planes so far today.  There was also a massive cruise ship that we could see towering above the port building – the Dawn Princess.  We wandered around and were told that the ship was leaving at 8pm so we decided we’d have dinner and be there to take some photos of it then.  But in the meantime, David was very excited to see a small seaplane land and we took some photos as it taxied around to its berth and refuelled. 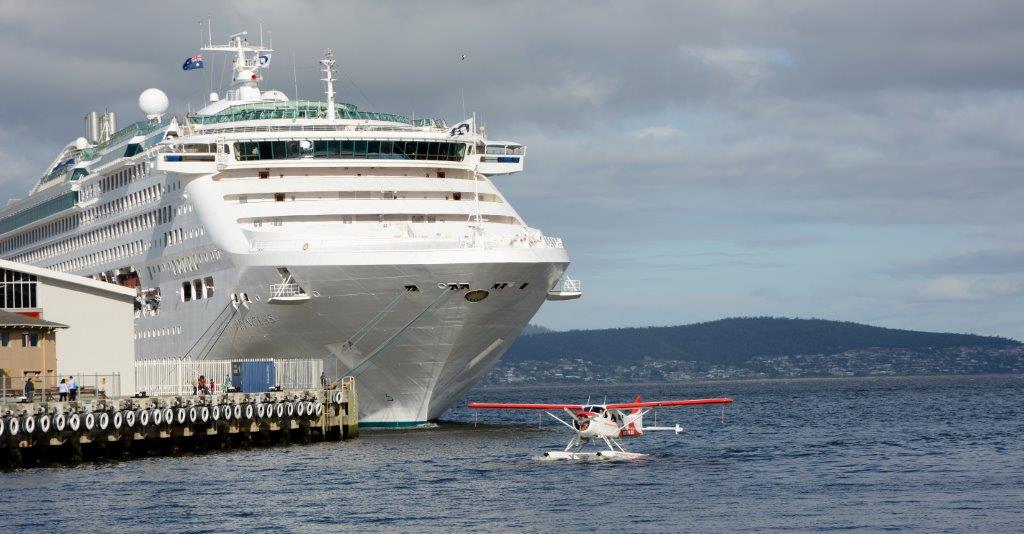 David spoke excitedly to the lovely girl who helped with the fuelling and she gave us details of where to book a flight eeeeeeekkk!!!

One of the most wonderful things about this holiday was that David truly did turn into a Photographer!  He only once tried to drag me away from taking photos – you’ll see and understand why when we get to that ha ha!  And here, within a couple of hours of landing in Tassie, is some proof… 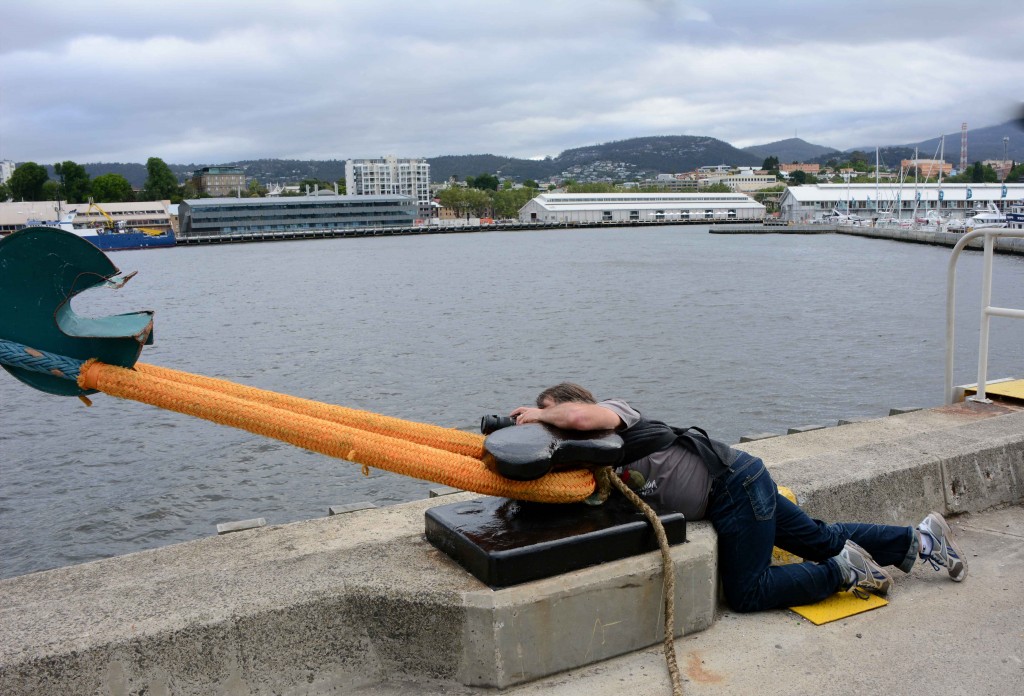 After this we went into the building where there were some arts and crafts for sale, it was the building that passengers for the Dawn Princess had to walk through to get back onto the ship.  Apparently we weren’t allowed through the far doors without boarding passes but I did a good impression of having one toe inside the door and all of the rest of me out on the dock to take a few photos while David and I both chatted and laughed to the 2 security personnel.  It was too close to the ship though and I didn’t get anything worth sharing.

It was now time that the restaurants would be open so we decided on an Indian meal at ‘Saffron’ overlooking the harbour.  The food was very nice indeed.  We had an entrée, as suggested by the waitress, of papadams with some dips and then the main meal of a chicken curry and a vegetarian curry with the obligatory steamed rice.  All were really very, very nice – though we practically licked the plates clean and slightly larger serves would have been appreciated.  The bill was ‘reasonable’ – I won’t go as far as saying cheap because it was on the other end of the ‘reasonable scale’ in my opinion.

As we came out of the restaurant at 5 to 8, the Dawn Princess had already started to draw away from her berth!  However, there really wasn’t anything spectacular about it so, although we took a heap of photos, none are worth sharing.

The fact that it was only just then starting to get dark felt very strange to us.  We are not accustomed to daylight savings at all.  But it had been a very long day so we went back to our room, glanced through our photos and backed them up to the little laptop and fell into bed.