SET UP FRIDAY – 14th Nov
I am sure that you will all be relieved to hear that *most* of the words have been used on the preparation pages but, for those that know the ‘In Print Me’, I’m sure you’re already expecting me to find at least *some* more examples of the English language strung into varying lengths 😉 For those who don’t know me in person, I’m pretty quiet in real life and the ‘In Print Me’ is as much a shock to me as to everyone else!

So, as has already been said, the props are made, the shopping has almost been completed, the food preparations that can be done in advance are done, and there has been a week of pregnant anticipation with mouths carefully guarded against giving away the secret at this last minute after succeeding so well for the previous 3 months. It would be so very disappointing to make a slip now! And David was now on holidays from work so we all had to be guarded every moment of the day!

It was time to pack the car with the things that were to be set up at Nat and Amie’s today and I brought bags of supplies out from the lounge into the kitchen (from where the car is reached through the door to the garage). Mostly it was just multiple plastic shopping bags, but there was also ‘The Coffin’. If David saw the contents of this now it really wouldn’t matter, he was about to not only see, but help to install them as soon as we got to our destination anyway.

Nathan was almost ready for us when we got there, and by the time we’d finished all the essential preliminaries I suppose about an hour or so had passed. So now it was time to unveil ‘The Coffin’ and its contents of around 2,500 carefully cut streamers, and explain to Nat (who already had many inklings of what I proposed) and David, whose innocence was still intact, exactly what I hoped for!

I explained to David that we were creating a ‘night sky’ because “We both love to look at the night sky, don’t we?” And he took the words for what they were and thought nothing more about it for the entire day as we worked.

We also had some friends who very kindly came along to help and I think we’d have been still there as night was falling without them! Thank you so much – you know who you are!

I pulled out 4 balls of very strong, blue, string from one of my bags, along with a large box of staples and 2 staplers. My friends had also brought along a stapler each, having been forewarned. And it turned out that Nat and David went up and down the ladders tying string to the overhead beams as my friends and myself took each streamer, one by one, and stapled one end of each over the strings before they were hung from the roof. We also managed to staple both ends of a couple here and there which made us laugh, but they were easily fixed. 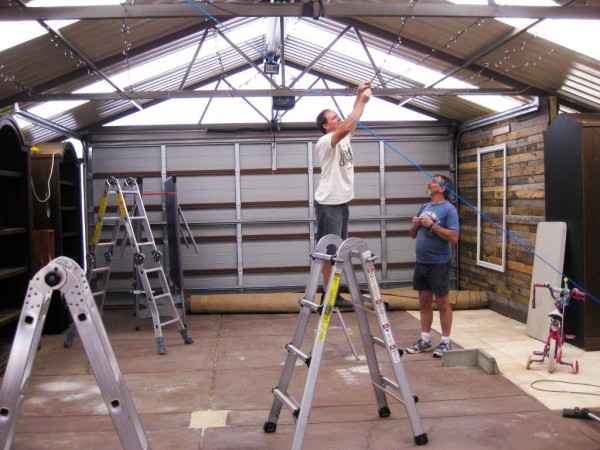 It took quite a few hours, as you can imagine, and we took a lunch break of pizza which Amie kindly went to collect. Nathan put on some music suitable for our age group and we all worked and chatted happily as the night sky began to take shape.

Additionally, after a bit of ‘do I, or don’t I?’ I’d decided to take the planets and stars along as well. They fitted with the night sky theme so there was no reason for David to think any more of those either. They also helped fill one end of the patio roof to make up for the unexpected larger area than my original plans. It also helped that the ‘night sky’ was now further away from the TV screen so that would be seen more easily when it was playing the Dr Who video. 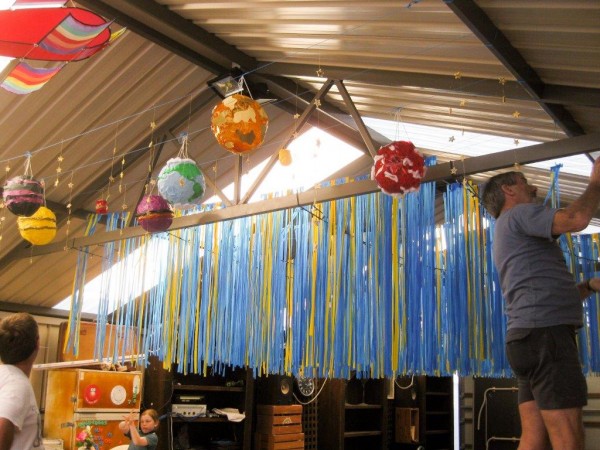 One End of The Sky

We also hung the photo booth frame from the roof and put the props for that in place, as well as positioning the camera tripod. We hung a sturdy rope from the ceiling to the tripod so that, if the camera or tripod were accidentally tripped over or knocked, it would not actually hit the floor!

And, believe it or not, that was all we could do for the day whilst keeping the secret secure!

We left David where he was while Nathan and I came back to my house in his 4-wheel drive to collect all of the secret ingredients. It filled the back of his large vehicle even with the back seats folded down!!! We were as careful as we could be with everything so as not to cause damage to it and, when we got to Nat’s, we threw a large sheet over the car to block the windows from view for when David and I left. It must surely have been really enticing for David by this stage, but he remained cool.

And then we came home and acted as if it was a normal evening any day of the week.

SET UP SATURDAY – 15th Nov
Needless to say there was much to achieve this day. Dan and I left home at 9.30am to go and get the balloons on our way to Nat and Amie’s. We left David at home with Andrew with their instructions… 1) go to the shops for final fresh ingredients 2) make cheese/pickled onion/gherkin sticks as we used to have for parties in our younger days 3) make a couple of large platters of sandwiches with one or some of cheese/chicken/ham/polony in them.

On arriving at Nat and Amie’s we finally got to see Amie’s amazing secret of her TARDIS cake. Here it is during construction. 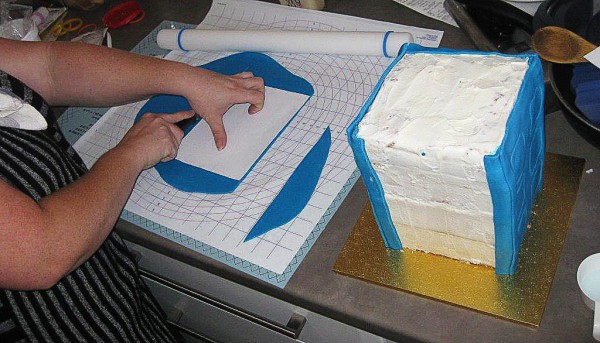 And finished. The light on the top even lit up!!! 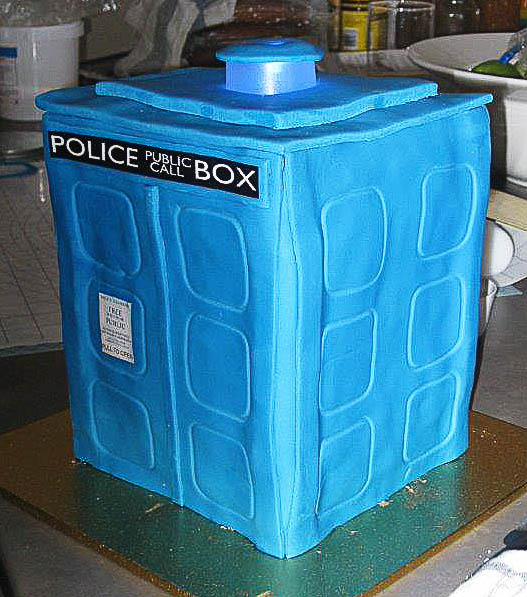 I’m sure you’ll agree she did a truly amazing job! Her cakes for the girls and other family members are the talk of the town! Thank you Amie for making such a stunning cake for David!!! 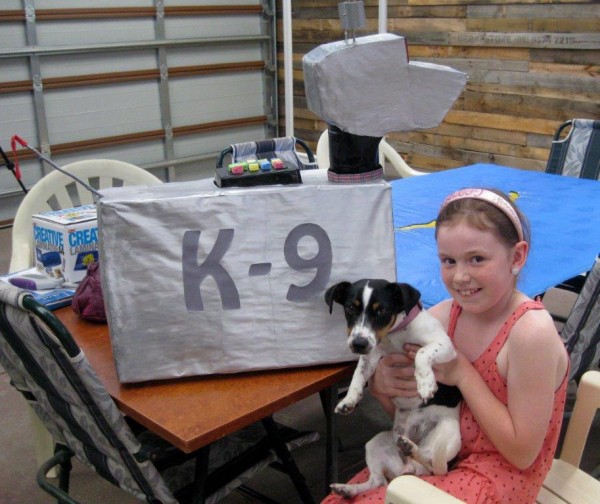 When Georgia saw K9 she immediately set to and made one of her own. I was really amazed, particularly the way she coped with making the head – that had not been easy for me to figure out, but it took her only minutes! 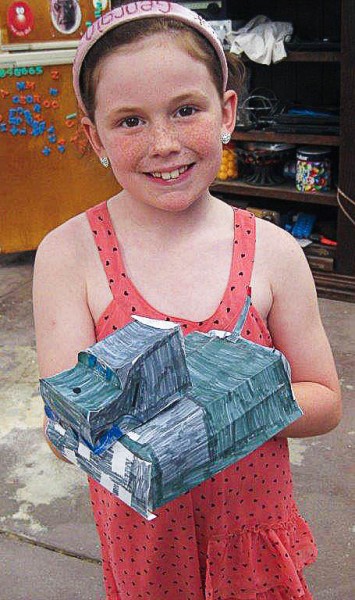 Meanwhile the rest of us were busy assembling props and, in the case of the Console, it was with my fingers tightly crossed. We set the central cardboard tube over the table’s fitted umbrella and attached other, smaller diameter tubes around it. Then cut channels down the length of 3 of these tubes, which each had a black-light flouro tube inserted. We covered the assemblage of tubes with yellow plastic (which oddly seemed to match the night sky stars and Cassandra ROFL) and a spiral of ‘glow in the dark’ strip that Nat had encircled the group. 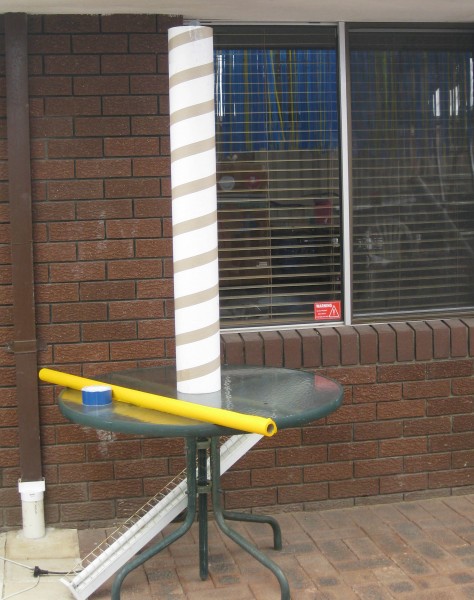 The Console Begins to Take Shape

Beginnings of the Centre of the Console

And then it was time to attach the panels. Some modifications were indeed needed and we had to pull some of the knobs and dials off so that the panels could overlap more than I had expected. 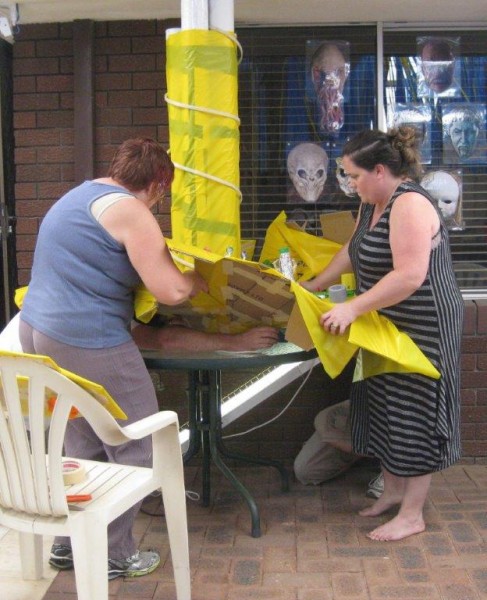 We also made the skirt by laying out yellow plastic along trestle tables and taping aluminium foil to the back to block light. You can make out the white fluorescent light sitting at an angle under the table and it was this light that we were blocking from coming out the sides, ensuring that it would only shine upwards through the coloured tubes on the Console itself. 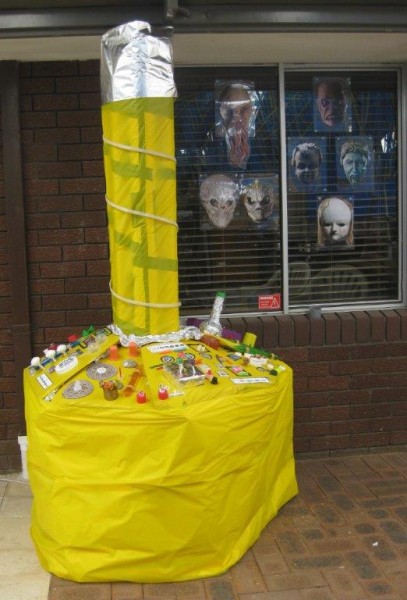 The true magic of the lighting appeared slowly through the evening as the natural light failed and it was wonderful to glance around and see the changes in the scenery. Nat and Dan hung The Tear and Nat positioned the fluorescent light behind the tear itself so that the light would shine through the yellow section correctly. 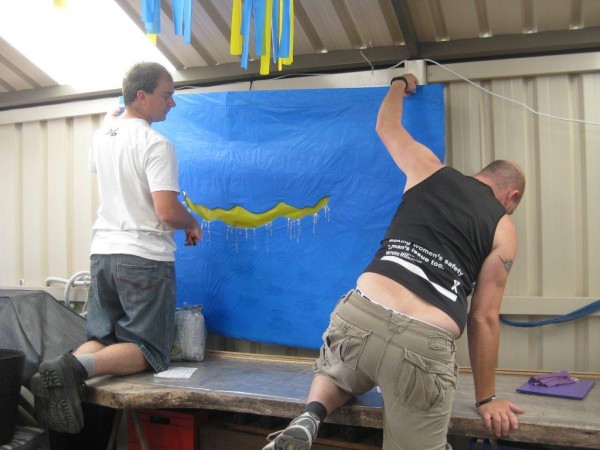 The Tear Being Placed

And here’s a photo of some of the planets and stars hanging nearby. You’ve already seen Cassandra so I *think* that’s all I need to tell your for now. Dan and I went home to shower and get changed for the *very* long awaited Party!!!!!!!!! I’d been home for several minutes before I suddenly remembered to put my white cotton gloves on to hide my manicure from David. Eeeekkkk!!!!