Then we were off to drop off a few people who were staying in hotels in the Park for the night ready to do another tour the next day.  The first hotel was ho hum ordinary, but the 2nd one was the world famous[?] Crocodile Hotel.  It really was quite something, and much bigger than I had expected.  The coach drove along the croc’s right hand side, around the front of the nose, and then circled tightly left, into the side of its open jaws.  The reception was ‘down its throat’.  Unfortunately, we weren’t allowed off the coach to take a photo and, although we took one from the coach window as we drove away, we weren’t far enough back from it to get a decent shot.  Parts of the hotel were 2 story and the stairs that came down from that level were behind the facade of the croc’s legs.  It really was well done.  This is as good a photo as I was able to take, showing only the crocodile’s head.  You can see the eye high up on it which helps you to distinguish the shape of the slope leading down to the nose. 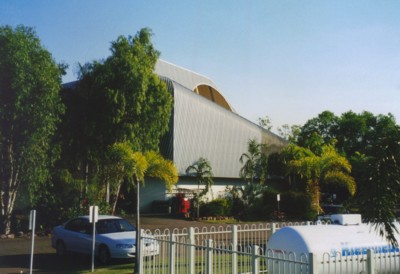 That was about that for Kakadu, and we began the journey home again.  The Park is almost the size of the country of Wales, so we really only got to see some of the highlights in the one day available to us.  You would need a week, and the two seasons (wet and dry), to properly do it justice.

We really hoped to stop in again at the Bark Hut for dinner, but we also wanted to go to the Thursday night markets if we could get home in time.  So it was with mixed feelings that we saw the Bark Hut ‘pass in the night’.

Back in Darwin, we got off the coach sooner than we should and discussed how best to find the $2 taxi.  We discussed it some more and could not come to an agreement, so raced into the back door of the hotel and asked reception to call a real taxi for us.  We were mad keen to see the markets as everyone said that they were the highlight of Darwin.  We were told that as the sun is about to set, trading and buying stop and everyone stops to admire the sun-set [which lasts exactly 2 minutes from hitting the horizon to passing under it], and then trading resumes.  We were too late for this part but wanted to see the stalls too.

The taxi driver was really friendly and chatty, and it turned out that the markets were just a little further along the road from the Gardens that we had walked to on Sunday.  However, it would have been quite a walk and we hadn’t known where they were anyway, so the taxi was well worth the $6 to get there ASAP.

The taxi literally dropped us at the edge of the market and I fell in love with the very first stall that we came upon.  It had little animal ornaments which were coated in ‘real fur’ and looked so life-like.  There was one dear little kitten that I could not pass.  She is less than 1” high to the point of her ear, by about 1½” wide, and is snuggled in a little ½ circle, asleep.  She has a tiny pink nose and grey/white fur with a white face.  It is so sweet!  I only wish they’d had 2 because I would have loved to buy one for Kellie.  [All right, if you want the truth – I bought it for Kellie, but couldn’t part with it! LOL]

There were so many lovely things [and heaps of plastic junk too].  We bought a tea-towel for David’s mum with a crocodile, and arrows pointing with silly comments ie sharp eyes for seeing tourists; stuff like that.  We got a silver bangle for Amie that had a resin disk in the centre with the tiniest dried flowers inside.  I also bought ear rings to match which were to be for me, but it seems silly to split the set, so I’m giving them to Amie for her birthday.  We found a couple who were making name necklaces or brooches to order on the spot, so asked for a necklace for Kellie.  I thought it would be novel for her to have one spelled correctly!  Would you believe they had one already made?  So we came away happily with that.  The names were made of silver wire bent around very cleverly and we watched the stall holder make a few other names.

It was a really busy place, and we jostled along with people of all nationalities, which I really enjoyed.  There were all sorts of buskers too. Some of which were quite novel.  The one that I most enjoyed was a lady standing on a little raised pedestal.  She was wearing a Victorian looking wedding dress and had heavy white makeup on her arms, face and neck, and was standing statue-still.  I wanted to take a photo but David said no.  Why do I take any notice of him?  I wish I had now.  She would wink at the occasional, unsuspecting person as they passed, which was great fun to watch, and she was very good at it.

There were about 50 food stalls from every country you could mention, and then some.  I was hungry when we got there but David insisted on seeing the stalls with our hands empty which made sense, so we delayed the food.  By the time we’d seen everything, most of the food stalls were closing down and the remains were looking a bit dry.  I wasn’t too thrilled because by now I was ravenous.  It was practically 10pm.

We decided to catch a taxi back to the hotel again so that I didn’t faint with hunger while walking and David was feeling it too by now.  When the taxi driver asked where we wanted to go, I waited for David to speak [as usual] but nothing was happening [as usual]  so I spoke up [as usual too] and asked if he could take us somewhere nice but not too expensive that would still be open so we could get a meal.

We ended up in a busy café/restaurant not far from the back of our hotel and had drinks and an excellent meal.  I followed mine with cake.  If you’re gonna be on a flying-then-hotel holiday for the first time… enjoy is what I say.  And this was our last evening in Darwin.