For a birthday treat (as if holidaying in Singapore wasn’t enough!) it was decided to have dinner in our hotel once we’d asked to check the menu to make sure it appeared appealing. Considering how quiet the dining room was for any meal other than breakfast we felt we needed to check! Unusually, the menu was not in the book in our room so we didn’t know what they served – the book did, however, say something about drinks in their “lively bar”. Where they got the description ‘lively’ from is anyone’s guess as it consisted of about 6 bar stools and 2 lounge chairs and very rarely were they sat upon!

Anyway, the menu did look good so we accepted the offer to be seated. It was quite posh, defined by me as having a cloth napkin placed in your lap by the server. For entrée I ordered a Caesar salad which came with 3 large prawns on top but was a small serving. Very tasty though! David had tom yum soup which came served in a young coconut, so was very stunning to look at. The photo doesn’t do it justice but you get the idea.

In passing, that’s the hotel foyer behind David and we were stunned that the staff had no seats, they did their whole shift standing up!  But back to the meal… 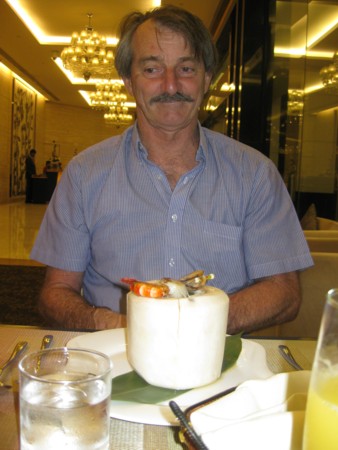 Mains in David’s case was served before I’d finished my entrée – I guess manners are different the world over but that was a bit of a surprise. He had dory served on finely diced veggies with some spinach. The 3 items were stacked on top of each other as is the modern chef’s whim. The meal was very tiny and in fact could almost be mistaken as garnish! I had dory served on Japanese curried veggies. The veggies were exactly the same ‘dice’ as David’s and the meal size similar. Half way through (which was a long time being me, even for such a small meal) some rice arrived!

We decided on dessert as well seeing as it was my birthday, and the fact that there was still plenty of room for it in our tummies. 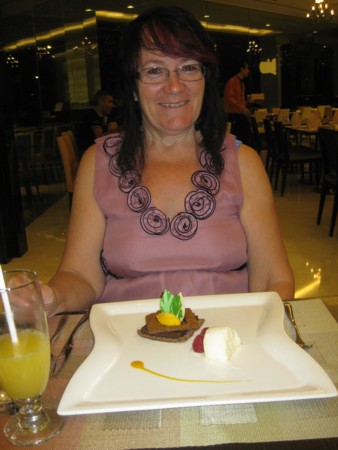 I chose chocolate ganache served with ‘baby carrot’ something or another, which was a worry. Still not sure if it was the frozen blob of yellow something on top of the ganache or the fine drizzle of jus on the plate. I also scored a half scoop of a white sorbet, 2 huge, and delicious, raspberries and 2 white chocolate ‘leaves’. David’s crème brulee was in a dish so small he could barely fit his spoon inside it and he had a finger of wafer with 3 brown dots on it and 4 huge raspberries. Well of course then he started:   quietly enough that the staff couldn’t hear but even so… “Excuse me! Could I have a spoon that will actually fit in the dish?” Which made me laugh, which encourages him onwards… “I’m still hungry, can I charge this to some other poor sop’s room?” “Where’s this lively bar?” 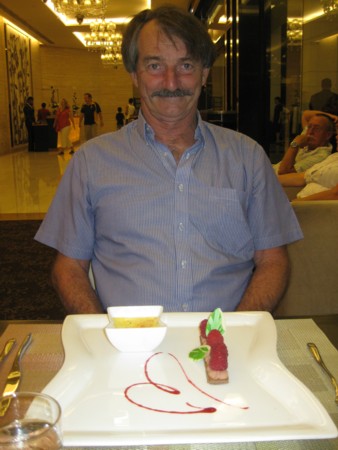 “Oh, it’s the 2 people sitting on the 2 lounge chairs behind us and ignoring one another!” “How will we join them in the bar when there are only the 2 chairs? We’ll have to sit on their laps – May, which one do you fancy?” There was more which I can’t remember in detail but I was absolutely in stitches, all the while being looked at in a confused and almost frowning manner by the main waitress which just made both of us worse – David for the things he was saying and me for laughing.

Oh I’ve missed out that David asked for a shiraz at the beginning of the meal, which he had to repeat and the waitress went away, apparently shuffling under the bar, then whispering to another staff member and then came back and said “Shiraz? Is that a red wine?” and David said “Yes”. And she should consider herself lucky that’s all he said – nothing funny. She scampered off, obviously relieved. You’d think she’d never heard of it! I wouldn’t mind if she was a trainee or something but she was actually instructing the young (and very friendly) girl who actually did most of our serving. I’d asked for a Sing Sling but she came back and told me they were all out of gin so I had a rum in pineapple juice instead. David’s shiraz arrived in a glass bigger than his head which he obviously enjoyed as he had 3 in the end. The meal cost $190. Wheweeeee!

After that we went up to our room to watch some more golf and have a cuppa until 11pm and that was another day gone.

MONDAY 19th July
Sentosa Island day. We started with breakfast in the hotel which was still very quiet, and that got no complaints from us, except that there were no chocolate rolls in the pastry selection. We got paired up with an English couple who had just arrived from Hong Kong and they said that if we think Singapore is busy we should try HK! We had a really nice chat to them, comparing notes on what we’d seen, and still wanted to see, and then back to the room for a shower, get dressed and out, except the safe wouldn’t unlock for us to get the movie camera out. It turns out they’ve had a few safes do this when there’s a laptop inside and that’s exactly what we did have so it held us up a bit from leaving but the delay truly didn’t matter. Why would a safe lock irreparably if there’s a laptop in it? The laptop was off so it’s just an inert pile of plastic and wire!

We set off for the MRT from Clarke Quay, down the 90 steps and onto the train to Harbour Side shopping centre where we had to go up escalators to the 3rd floor to catch the Sentosa Express. This included joining yet another massive cattle corral to buy tickets for the Songs of the Sea show and Butterfly World. I went to a different queue to buy the tickets for the monorail while David queued for the other tickets. My queue was very short so I sat on the edge of a flower box to wait for him to join me. It was a long wait! And he’s not that patient a man so was sighing and shifting from one leg to the other every time I could see him, just to make sure I appreciated his efforts. And I did.

Once he got served we went through the turnstiles and deliberately missed one train so that we could be first in line for the next one (and thereby get a seat). We parked ourselves right next to the door that would open and I’d already seen that people got out the other side so we didn’t have to allow them space and wouldn’t get shoved out of pole position – goody!!! We stood as widely as we could, blocking any hopeful contenders who wished to push us aside for the few chairs. Yes, one couple did try to push us aside, would you believe? But we stood strong and I think they got the hint. David didn’t take a seat once the train did arrive, which was pretty silly as they were then taken by ‘healthy young things’, but I got one so that I’d feel safe for the journey. It turned out to be a really short journey anyway LOL

There was not as much to do on Sentosa Island as we had thought. There was a Universal Studios that we wouldn’t have gone to anyway but it was booked out before we’d bought our tickets. There was a concrete-paved toboggan ride which you accessed by a ski lift and we’d have liked to take the ski lift in both directions and miss the toboggan but that option didn’t seem available so we didn’t do that either. Instead we asked for directions to the lookout hill from 2 people who worked on stalls around the place but both were as vague as each other so we just set out to explore anyway.

Things were extremely hard to find! The English couple had warned us of this and they were right. – up, down, roundabout, ask directions and get nothing descriptive enough that it was of use. Signposts sent you off in one direction but then you’d reach the next intersection and it would tell you other things but not the one you were looking for! It was all good fun! Or not. But it was not as if we were in any kind of a rush. 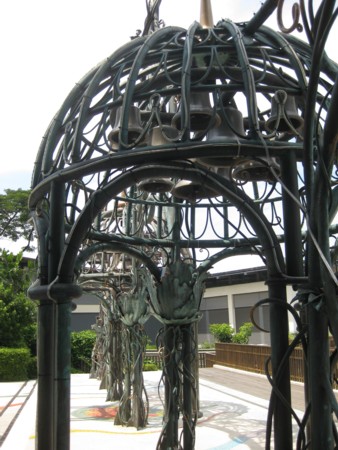 We found a sloping zig-zag footpath so presumed that it could possibly lead to the lookout and took it. At the top was a gorgeous wrought iron contraption with bells hanging in the 2 pergola-looking sections and we found out later it was a clock of sorts. There were no hands, no clock face, but the bells chimed in the Westminster pattern on the quarter hour. In this photo you can see the bells, the red train on the monorail – these came in a range of colours – and an odd, orange shape that I’ll tell you about… 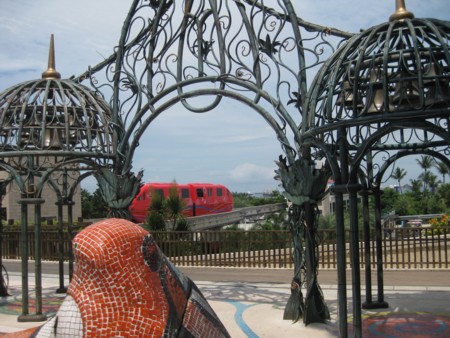 The orange shape belonged to a water sculpture about 200 metres long and 2 or 3 metres wide which meandered its way up a long slope with paving either side. Some of it represented sea creatures in shape but all was decorated with these small mosaic tiles in garish colours. It looked more as if some giant had thrown up than a thing of beauty. And it was also not a thing of practical use as it said ‘no swimming’ at regular intervals. It would have been wonderful for small children to have played and paddled in! There were gentle water spouts spitting into it at intervals but it was not for fun!

After a few wrong turns, at the highest end of the ugly water feature, at the foot of the Merlion, we found the Merlion souvenir shop and asked for directions as to how to get inside the thing. David had paid for tickets while buying the other 2 sets. The shop man waved his arms around and gave us some words but they still didn’t help us find the entrance. Somehow, we stumbled between 2 high metal fences where building works were cordoned off and down some steps and there at last was the entrance!