TUESDAY 13 and 9/8ths of July 2010
Our lovely house-sitter had been shown the ropes and introduced to Marley, and soon enough my cousin Lesley and her husband Bob arrived on schedule to take us to the airport. We arrived at the airport at about 9.30pm – hence the date for this entry.

All went well with check in and after sitting around eating for the sake of passing time we finally got called to board on time for the 12:05am lift off. I have to say that we were very impressed by the ‘leather’ seats on our JetStar flight, they felt so much cleaner than the fabric ones we’ve had before. We had the back-most seats on the right of the plane, as we’d requested, so that was perfect. Once everyone was settled we had an exhilarating and smooth take off – we are always filled with excitement and awe by the sheer power of this experience and it is definitely the highlight of any flight to us.

I had a window seat, as always, and David leaned across my lap and we both looked out at the beautiful Perth city lights. David suddenly saw the unmistakeable layout of Joondalup Drive and Grand Boulevard and we could actually see the exact spot where our house was. So exciting!!! (Yes, we’re pretty easily pleased LOL)

It was a beautifully smooth flight and, because it was nothing but dark ocean outside, we managed to accept that we were missing nothing and turn our minds to resting. Finding that none of the seats on the aircraft recline it was very fortunate that we had nobody in our third seat so David moved to the aisle allowing me to lay on the other 2 seats with my head on his lap and get a bit of a snooze. After a while we swapped places, allowing David some sleep as well. It’s the first time we’ve ever been able to sleep on a plane and helped so much with how we felt on landing.

Once time was approaching for the end of the flight we started to look out of the window and could see more lights than we expected and were wondering if we were looking at Indonesia. We presume so anyway. The following landing was really smooth and everyone got off without too much delay. We knew we’d have to be patient from the back seats of course but it was a bonus in many ways as our luggage was ready as soon as we got to the carousel.

Oh and one surprise. We’d packed some sandwiches for the flight but not eaten them all so I asked the hostess if we would have to throw them away and she told us that it was fine to bring any food into Singapore. It was only drugs they objected to! We laughed. As it turns out, we think that all foods are imported; there appeared to be no farming land at all and therefore, I suppose, no secondary productions either.

We were allocated a very scruffy looking taxi to take us to our hotel as daylight was beginning to spread enough for us to wonder at the number of high-rises beside the road. The other thing we got to wonder about was the speed he was travelling at!!! It was a 90 kph limit all the way down the highway but he was doing 120 kph – sometimes a little more!!! I was sitting on the left back seat and could clearly see the speedo. I considered asking him to slow down as we were hurtling past everything else on the road and it was rather frightening, but I was scared this would make him do worse things. I found myself thinking ‘we’ve just flown all this way safely and now we’re going to be killed in a car accident’ and ‘where are all these police I’ve heard so much about when you need one?’ The road went on for mile after mile – further than I expected any road on little Singapore to travel. At last he slowed down and I saw that we were on a 70 kph limit road. However, we were still travelling at 100 kph!

Finally we hit city streets and he had to slow more – what a relief! We drove along the side of the Marina Bay Sands Resort – more about that later – which was quite exciting to see; then along the side of it and a short while later pulled in at our hotel, the Park Hotel at Clarke Quay. Two valets (I don’t know what to call them) leapt forward to open doors and take our suitcases from the boot while David paid the driver, forgetting to deduct the fee for scaring me half to death.

It was now 7am and we knew that we could only check in our bags and would then be homeless until we could check ourselves in at 2pm but had a very pleasant surprise… Reception said they had a spare room so we could check in straight away! How lovely! It was a twin room but she said that we could swap to the double we’d booked tomorrow if we wished and I said “Yes please!”

It was a tiny room, obviously with twin beds, so we unpacked just the bare essentials and then curled up together on one bed and slept until our doorbell rang at 9am. It rang twice before I realised the noise was for us and David leapt up, grabbing a towel from the bathroom to put around himself to answer the door. It was a maid asking if we had any laundry! And apologising profusely, obviously aware she’d disturbed us by the way David was dressed – or not.

Well, we decided it was wise to get up then anyway and had a cuppa in our room followed by a wander around the hotel. Very nice. Very nice indeed. A gorgeous blue, sparkling pool with Grecian columns at one end where the spa jets were, and some outdoor massage beds, and we met Fun, the food and beverage manager for the hotel. What a gorgeous guy he was, and very well named! He gave us his business card and told us to let him know if there was anything he could do for us and we felt, rightly, that we’d made a friend.

While speaking with Fun we noticed that we could see the left-hand tower of the Marina Bay Sands from the pool area so took a photo. Imagine my surprise when it didn’t show in the picture! The moisture in the air was so great that the camera was picking it up and ‘hiding’ the building in the distance, but here’s a shot I took another day.

Now I’ve neglected to mention the temperature, which is very remiss of me as it was the first thing we relished as we came out of the airport. Lows for July are about 24°C and highs about 31°C and this hardly varies at any point of the year. How blissful!!! No ‘winter wardrobe’ and ‘summer wardrobe’ would be so fantastic!

We decided to go for an aimless walk just to get a feel for the place so went out of the hotel to the left and walked along a very narrow path with grass on one side next to the road and a thick hedge along the other with about a 25 storey building next to it. We very quickly noticed that vehicles here honk each other with gay abandon. They honk pedestrians, cut out in front of each other and change lanes like they’re plaiting a may pole. A bus driver showed his ‘unhappy finger’ to a car after they’d both beeped at each other. David said for the first of many times “I’m glad I don’t drive here!”

We turned left at the next set of lights and just walked along enjoying the warmth and the new sights and sounds. The path was not only narrow but there were random steps here and there and the path ran out from time to time. We turned left a few more times and found the river so walked along the side of this and came upon an open air café named eM.

May at eM cafe

I took a fancy to some of the chairs so we decided to have breakfast here – as good a reason as any me thinks 😉
I loved that the chairs were made of wood in its original state.

David had a ‘big breakfast’ and I chose pancakes with berries and maple sauce. I also had the most delicious carrot, apple and ginger juice while David had a herbal tea of some description. We took our time and watched the world go by and enjoyed watching the little birds dart around the tables and a small ginger and white kitten arrive and lounge around; everything was so peaceful.

After we’d paid we asked where the toilets were and were told they were just inside the tall building behind – which turned out to be a shopping centre. I’d just sat on the loo when a movement caught my eye. The floor had black tiles so shiny that I could see the lady in the next cubicle looking at me in their reflection. Eeekkk! I piddled as fast as I could and tried not to lift far off the seat before covering my assets as speedily as possible while vowing never to use those again! 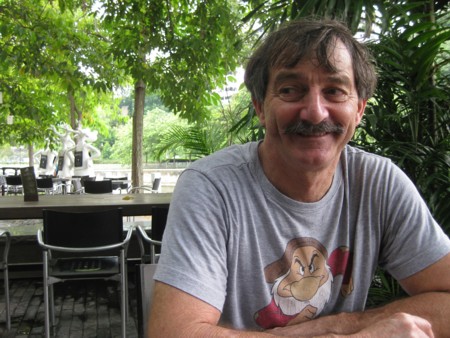 Here’s cheeky David wearing his Grumpy t.shirt and you may be able to make out the 3 white reindeer in the background on his left.