We stayed admiring the view for quite some time.  It was just breathtaking, not least because I felt so comfortable up there by now.  Eventually there will be a proper café up there but in the meantime there is a small stall with the poor girl standing in full sun all day selling sandwiches, hot dogs and drinks, plus another for souvenirs that I’m tempted to call tatty because they were sun damaged!  I’m sure they’ll be better once the proper shop is complete and they are in the shade.  We bought some drinking water and continued around to a gate where we climbed some steps and came to the famous swimming pool.

Two hundred metres above the ground on this platform across the 3 towers is a 150 metre long swimming pool complete with palm trees.  Unfortunately it is only for residents of the hotel, and I get the impression they can only go in it once per day for some reason – I may be wrong.  The cheapest room was about $350 for a night so we weren’t about to pay for a second hotel room just so we could swim and we didn’t have our bathers with us anyway, but it would have been nice!  We commoners satisfied ourselves with looking and taking photos instead. 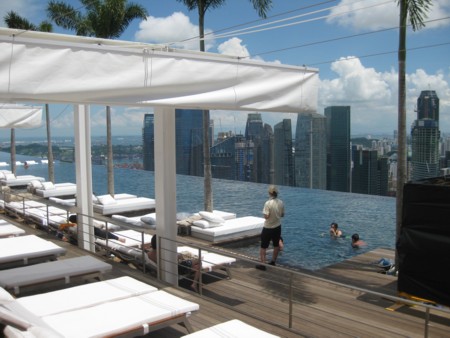 As you can see, it looks as if the water (which actually does flow over the right-hand side!!!), just goes straight down all 52 floors to the ground.  In fact there is a narrow walkway on the next floor down plus a catchment trough for the water which gets pumped back into the pool but even so, the effect is that you could just swim right over the edge! 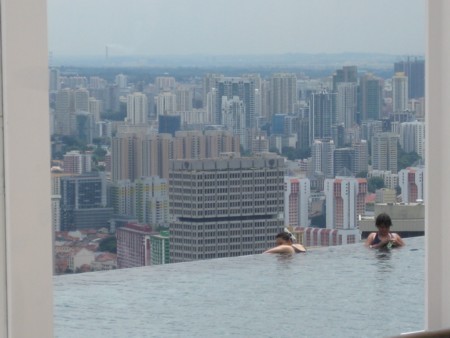 Behind the pool was a glass wall and I decided this Brave New May needed recording for posterity so David took a picture overlooking just some of the many ships moored offshore.  I was not leaning on the rail belonging to the glass though! 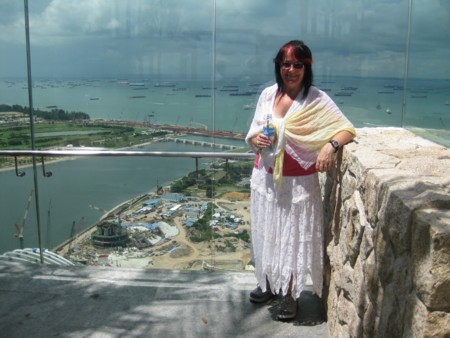 Brave May near the edge 200 metres up

We went back around to the start and sat on the decking under the shade of the small top-most floor just looking at the view one last time before we piled back in the lift to end our adventure.  This time we had another 7 or 8 men with us but I still got my wall to lean against and was so self- satisfied that it actually may not have mattered for this one trip.

We walked out of the door of Tower 3 and on around the bay past the complex they are building for the Youth Olympics in August.  Here’s a sign that tickled me enough to photograph it… 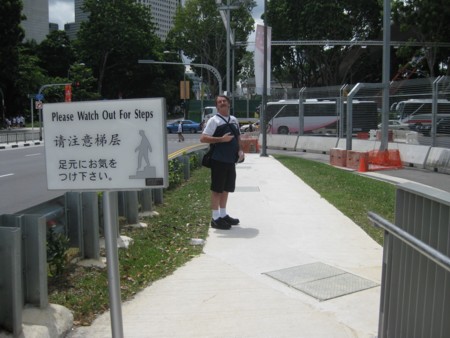 The only danger was the sign - there were no steps

Ummm, what steps?  There weren’t any!!!  The only hazard was the sign itself in the middle of the footpath.  And in fact, on the other side of it it said ‘no public access’ but we’d just walked across the bridge where it had not said any such thing from the other side!  You’ve got to laugh!

We continued our walk, on around the bay and across the river via a bridge, always getting closer to the Merlion.  There was a bit of a pier to walk along to get to his front view but it was busy so David declared that he was quite happy looking at the back thank you very much.

We were decidedly in need of lunch by this time, in fact it was about 2pm and we were very hungry so we walked along the bay front looking at the choice of restaurants.  Many looked very expensive; many only had outdoor seating areas where smoking was allowed so after walking the 200 metres or so we ended up turning back to the first café we’d seen, the ‘Coffee Bean and Tea Leaf’.  David ordered a chicken pasta dish and I had a Caesar salad and both were delicious, as we sat looking at the crowds around the Merlion.  Additionally, it was really nice to sit and rest as we’d walked about 8 kms by this time without a break on our already wearied legs from yesterday.

Setting out once more we decided to go to the famous Raffles Hotel so recrossed the river bridge and looked again at the map, realising it was still quite a walk in the wrong direction for getting back to our hotel and we didn’t honestly feel like it so we turned back as far as the bridge and then turned right to head back to our hotel which was probably about 3 kms still to go.  Our other reason for getting back to the hotel was to change to our double room and we felt bad that we were holding the twin room past the noon checkout time, though reception had assured us that this was OK.

On getting back to our Park Hotel we went to reception and they gave us the keycard for the new room, still on the 3rd floor, and just asked that we bring the old keycard back as soon as we’d vacated the first room so we went to check out the new room.  Woo hoo!!!  The new room, with its door snuggled privately behind the lifts, was gorgeous!!!  Quite a bit bigger, though still smaller than many hotel rooms we’ve stayed; in, the room had an entrance hall with a kitchenette and wardrobe and room for the cases.  Around the corner was the bathroom with a frosted glass sliding door and a clear glass wall beyond the shower looking straight into the bedroom.  Very romantic!  We liked it very much.  Oh, and the view from the window was over the swimming pool which was one floor below.  There were spa jets in the semi-circle part near the columns. 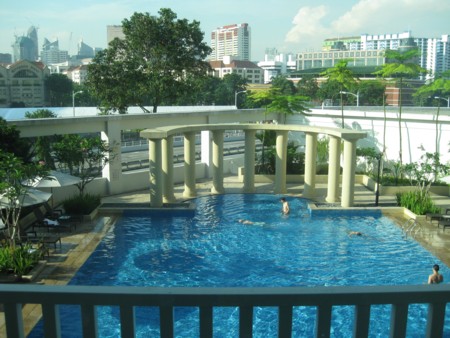 We took the keycard back to reception and then unpacked properly, very grateful to be able to do so, and then decided on a nice cool swim followed by a shower.

At this point, now I actually had space to move, and was nice and cool, I decided to do the bellydance for David that I’d been practicing for months.  I’d also made a really nice costume to wear – much nicer than anything else I’d had prior, so I went to get ready while he set up my laptop to play the music.  In the past I’ve felt nervous dancing for him but this time I was completely relaxed and happy about it and it went really well.  It was a dance with some humour in it and he chuckled in the right spots like a good husband should and reported that he enjoyed it.  And so did I.  Yes he did take photos and no you can’t see them hehehe.

After this we went across the road to ‘the grey building’ which was actually called UE Square, or was it EU?  Anyway, there were 3 floors of shops and on the ground floor was a DeliFrance where we’d seen people using laptops and David had seen a sign that said ‘free internet access’.  We chose a drink and a cake each and I tried to log on but without joy so David went and asked and apparently I had to go somewhere to sign up (for free) with SingTel to then be able to get the free access.  I couldn’t be bothered.  I was happy not being on the computer while on holidays anyway and if it was going to cost us coffee and cake to log on each time it was hardly free!  The hotel could supply internet for a charge but I really was happy to be away from it.

We enjoyed our cakes and then took the laptop back to our room, locking it in the safe with our passports and decided to set off for the opposite side of the river, past Clarke Quay, to where we’d seen a long row of canvas roofed restaurants along the river-side earlier that day.  Past all of the nice Clarke Quay restaurants and then under an underpass to the ‘tent city’ and no sooner there than people started to jump out at us to entice us to eat.  They did this in a more gentle fashion in Clarke Quay as well but this was more insistent and caught us off guard so we didn’t have our denial words prepared and caved at the first one – a Chinese food place.

Ho hum, it was not a wise decision.  The lovely girl who had accosted us was replaced by someone who didn’t seem to want us there and was not impressed that we chose 5 small dishes; she seemed to want us to choose large meals.  Let’s just say our meal was served belligerently.  We’d chosen ‘broccoli with crab meat’ to share which was really nice, David had lemon chicken which he liked.  I ordered mango chicken but the meat had gristley lumps in it and the skin was crispy in the way that pork crackling is so I didn’t eat it.  I don’t usually eat chicken and won’t eat red meat but was too scared to order fish in case it came out with head/scales/bones and who knows what.  Chicken had seemed a safer bet, so I’m happy to take most of the blame for it not being nice to me.  But the gristle was not my imagination.  The ‘pineapple rice’ was served in a hollowed-out pineapple and looked very pretty but we both felt it had an odd taste so we didn’t eat much of that either.  David had a couple of beers and I had a Singapore sling but it was nowhere near the quality or size of yesterday’s that had only been $1 more.  We were very happy to finish that meal and move away from the restaurant.

David had to pay for the meal across the walkway in a permanent building.  I didn’t go in because they had crabs in huge fish tanks with their claws tied and that upsets me to see that.  If it isn’t bad enough they’re about to be eaten, they are having their last liberty denied them as well.  I ‘loitered’ out of the way and he was gone ages!  When he eventually arrived he told me there had been eels and all sorts of other horrors in fish tanks inside the shop.  It still makes me shudder now to think of it all.