A short distance back along Clemenceau, walking on the other side of the road, was a very steep grassy hill with trees part way up it. I adore running up steep hills and David didn’t want a part of it so I gave him the bags and ran up to the first tree and then back to David. Great fun, so I did it two more times by which time my legs were getting jelly-like but there were some steep steps going all the way to the top of the hill so we decided (and the man was willing!) to climb them. We started to count them but got distracted so who knows, and it was getting very much into dusk anyway. At the top there was a museum or something but we didn’t pay a lot of attention, not wanting to get stranded up there in the dark, which was coming on fast now, so found our way back down. Twice we passed one other couple and both times they tried to run us off the path by walking a fair distance apart from one another so that they took up three quarters of the footpath.  This struck us as rude at the time as we’d yet to figure out this was normal behaviour here.

We found our way down the other side of the hill and down to ground level, realising we were now across the road from Clarke Quay where all the night life and plentiful dining establishments were centred. Except we had to get there by overpass and we’d come too far down the hill, so had to climb back up these steps with tired legs, over the bridge and back down once more.

On the far side were pubs and restaurants, most with a choice of indoor or outdoor (read smoke-filled!) seating, and one of those giant sling shot rides and another ride that we never saw used. We wandered up and down the laneways seeing what there was before choosing to eat at Bayang, a Balinese restaurant. We had a beautifully tasty meal, seated at low wooden chairs with cushions. The service was excellent and very friendly. David had 2 beers and I had a very tasty Singapore Sling. Well, you’ve got to haven’t you? The final bill after a large shared entrée platter and a main course each was $104 which seemed, well, ouch! I think I must add here that now we’re home and David has seen the prices converted to Australian dollars they really were not as bad as they seemed at the time thank goodness.. At one point we thought that Singaporeans must earn a fortune to be able to eat out, but it seems to be quite similar to Australian prices in the end.

Here’s our entrée – yum huh? The crackers, which we’d thought to be rice crackers had a pork flavour so we actually left them after one each and found that they weren’t free as we are accustomed to rice crackers being. Oh well, you live and learn. The rest was delicious! 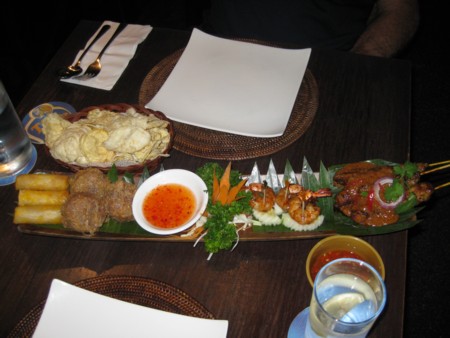 After a little more wandering to see the sights we headed, without misadventure, back to our room having walked approximately 10 kms today. We had a nice cuppa at 10pm and watched some golf on TV for a few minutes before falling into a well deserved bed. This was still the single bed which we decided to share still, leaving our suitcases on the other one and knowing we would be moving to our proper double room tomorrow.

THURSDAY 15th July
Looking out of the window of our twin room we looked through the leaves of a tree to the tall grey building across the street and hoped that we’d have a prettier view from our double room that we were to move into later today. As I looked out of the window I realised very quickly that about 7 in every 10 vehicles was a taxi. I know this is out of chronological order to tell you but our taxi driver going back to the airport at the end told us that there are 24,000 taxis in Singapore. I guess that’s not a huge number for the population, but it certainly is for the area.

From today onwards our breakfast was included in the room price so down we went to find the dining room absolutely chokkas, and a small queue to boot, but we were quickly seated next to a couple from Sydney and chatted happily with them while we ate. Breakfast was very nice with a good assortment of foods which I may as well go into here but leave you in peace about it the other days as it was pretty much the same each day – as seems the usual thing for most hotels, it is not a complaint.

Hot foods – several Chinese items, which did vary from day to day, such as teriyaki chicken or fish, noodles, something called ‘carrot cake’ which was kind of an omelette with not much egg but heaps of diced potatoes, a sprinkling of other small veg and a slight Worcestershire sauce flavour, ‘hashed brown’, ‘sramble egg’ (well, that’s what the labels said!), chicken sausage, pork bacon. ‘Boiled egg’ and ‘baked bean’ (both singular), Chinese porridge which seemed to be rather like a watery rice pudding but was nice, and then there was a chef who would fry eggs or make you a very nice omelette on request.

Small pastries – and we were experts on these by the third day 🙂 donut holes, small custard scrolls, small apple Danishes, half-sized croissants, miniscule chocolate muffins and, except for the last 3 days, small chocolate filled rolls which were my favourites.

Cereal which we didn’t even glance once at, orange juice, apple or grapefruit juice and then the usual assortment of bread that you could toast or not. I think that was all – oh, plus pots of tea or ready-made coffee so David took to sweet talking one of the waitresses to bring him TWO teapots of boiling water to put his own herbal teabags into. After the first day, he gave her the teabags as well and she graciously brought them back in a pot each, obviously thinking one was for me tee hee!!!

We had no complaints about breakfast at all and you could help yourself to as much or as little as you liked. The staff were very quick to take away used plates and glasses, and more were freely available but you needed to keep your cutlery and reuse it for some reason. Everything was beautifully clean and good quality.

After going back to our room to shower and decide what to wear for the day we set off to explore in another direction. Another observation was to do with the ‘green man’ for crossing on foot at traffic lights. He didn’t make any noise which caught us out a few times. Standing there talking and waiting for the familiar clicking noise we get here we would either find cars hesitating as to whether they could turn left or not – the ‘walk’ was rigged so cars turning left had to wait for pedestrians to cross – or we’d glance back just in time to see the green man turn to red and we’d missed our go. At many lights the green man was supplemented by a count-down display, starting around 30 seconds and counting to zero which was a really good idea as it helped you gauge whether to cross or not if you hadn’t seen the start of the green. For the most part the green man seemed to stay on for a very long time. Poor car drivers!!!

We decided to see Chinatown so walked right down Clemencau, left into Merchant and right into Hill Street with a few meanderings along the way into shopping precincts. We found Chinatown quite old and dingy; the footpaths incredibly narrow, and what little there was of them was crowded with chairs/tables/shop wares and people. There were people smoking everywhere so we held our breath frequently and rushed through to somewhere we could breathe once more. Every other shop was an eating establishment and we were floored at the sheer number of them. Ninety percent were Chinese or Asian restaurantlettes, and fair enough too, but it wasn’t the ‘westernised dishes’ we are used to here in Australia so we saw fish head soups and other menu items that really made us clearly decide we did not want to eat here. The menus were also very meat based and we are definitely more vegetabley inclined. It’s just personal choice, I am certainly not knocking their right to eat their own foods in their own cultural district, nor their own country – it was we who were the visitors after all! The prices were all incredibly good by the way, but it all seemed a little grubby to us. Perhaps we were mistaking old and cramped for grubby, but that was our opinion.

At one point we went into a shopping centre just to see what a Chinatown shopping centre looked like. Again, the prices were excellent and, had we been able to look in peace, we might have bought a few trinkets but we were accosted at every step and couldn’t wait to turn around and get back out again – our wallets intact LOL I will say though that they all accepted our ‘no’ very graciously, usually followed by a very genuine wish for us to have a nice day and there was no further heckling and we were very appreciative of that.

Eventually we reached a small grassed area with an MRT (underground) station and seemed to have run out of shops and places of interest. It had been a good walk and great to see how the locals lived and at last we saw 2 of these allegedly prolific Singaporean Policemen. I may as well say now that we only saw about another 2 or possibly 4 in the whole week and after all we’d heard we were most surprised. While I’m on the subject of policing there was indeed rubbish around the place; we’d heard that Singapore was spotless. There was not heaps of rubbish, but you wouldn’t walk very far without seeing one or two bits that should have been in a bin. There was not, however, any graffiti. Everything was the colour it had been originally painted and remained unadulterated and pure.

We stood at the MRT station wondering what to do next and decided to see if we could find the ‘3 towers with the boat on the top’. This was not actually shown on our map but we knew it was near the harbour so decided to walk back along the street we’d just come along, but on the other side, to Cross Street and walk down there to the coast. The scenery on the other side was not quite so busy but the random steps along the footpath where it differed in height was even worse than the busier side. Down 2 steps, along the shop front, up 2 steps and along the next shop front, then it was up 2 and then down 3. Really random for unknown reasons and I bet the lowest fared badly in the tropical downpours!