Wed 8th April
We spent the day packing our things and popped out to the shops a couple of times to buy some last minute requirements.  Lovely relaxed and cruisy day all round with the excitement mounting until Adam came to ‘take over the house and pets’ from us at about 6:30pm and then we were on our way!

We drove to David’s parents’ house and had a brief visit with them before calling for a taxi to drive us to the airport.  Check in etc all went to plan and we were on our plane hurtling along the runway by 23:15 as scheduled.  We both love the take-offs most of all; feeling the incredible power of the engines is such an amazing thing.  Then seeing the lights start to drop below us, twinkling like an incredibly beautiful Christmas tree, and knowing that each one represents someone’s life in progress.  What a privilege!

Thu 9th
We did not sleep on the plane at all.  Those things are so darned cramped aren’t they?  But that gave us the pleasure of watching the sun come up over the clouds (we’re so egotistical on this planet aren’t we?  The sun did nothing of the sort, we turned to meet it of course LOL).  This was the first time we’ve flown with Virgin Airlines so we had a bit of a giggle about them selling everything rather than giving it to you as Qantas do. 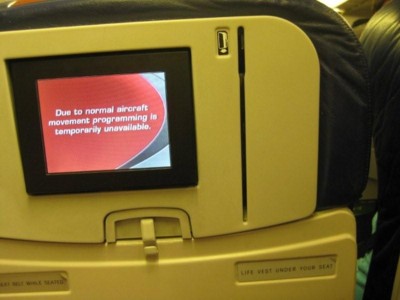 This was to the point that there were credit card swipes next to the TV screens on the seat backs!  David had bought himself a little portable DVD player anyway so we both plugged earphones into that and watched a few TV shows he’d recorded.  The flight went quickly enough, and then the thrill of landing in good old Brisbane.  We’ve been to this airport quite a number of times now, but for the first time we needed to transfer to the International Terminal.  We went to a transfer desk and were given free tickets for the Air Train and instructions on how to get to it and told to get off at the first stop.

All went well, and we didn’t need to do anything with our luggage thankfully, so we sat ourselves down at a café to enjoy some breakfast that wasn’t bouncing around and hard to catch as it would be whilst flying.  It was a 3½ hour layover and the food helped to fill some of the time.  We’d been awake for about 20 hours by now so I lay down on a bench thingy and tried to snooze.  It was fitful at best and I awoke half frozen to death (yes, you know me; I hate the cold so I’m exaggerating). 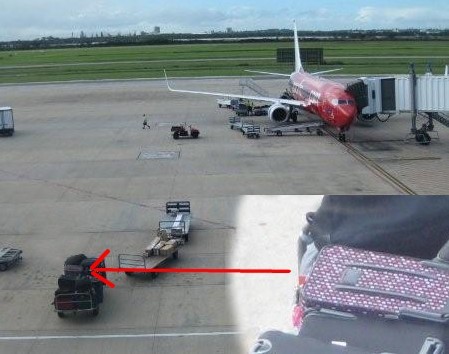 Virgin Plane at Brisbane and My Suitcase

Once our flight was called we looked out of the windows to see the ground crew working and there, on top of a luggage trolley was my suitcase.  We could see it as clear as day and I took a zoom shot of it.  We couldn’t see David’s case, but knowing mine was there was nice and reassuring, and then we boarded for our final leg.

Another take off to enjoy – wonderful.  There were no TV screens at all on this flight, but we had David’s DVD player and it was daylight so we could at least look out of the window as well.  There was one moment of excitement when we had an island below us.  According to the homeward journey I believe this was New Caledonia.  And eventually we started our descent into Nadi (pronounced Nandi) Airport, Fiji.

Customs was a long and slow-moving queue but we’d arrived safely, if tired, and nobody wanted anything of us so we were happy.  Eventually it seems that we were sufficiently scrutinised and off we went to find our hotel transfer bus.  The air outside the terminal was beautifully warm and the people likewise; really helpful and friendly, and decorated us with a shell necklace each.  It was now almost 4 pm Fiji time.

We checked into our hotel – the Novotel – and were given a second shell necklace each by a rather hunky guy.  David dragged me away from him though, so we got settled into our room and then just wandered around exploring until we could go to eat in the restaurant.  VERY tired by now as you can imagine! 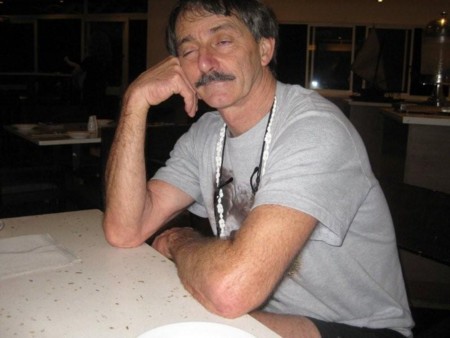 David sleeping at the Dinner Table

Poor man has threatened many times to trade me in for a faster eater LOL  Here he is waiting for me to finish eating so we could go to bed.

As soon as I’d finished we went straight back to the room, set the alarm for the next morning and crashed.  We’d been awake for 32 hours, so slept well.

Fri 10th
The 7 am alarm didn’t let us down I’m glad to say so we showered, dressed and went off for a light, continental breakfast, knowing we’d be on a boat in a short while.  After we’d returned to our room the phone rang and it was our transfer bus driver confirming pick up.  We were very grateful for the confirmation as we’d almost missed a boat in Cairns because the scheduled bus had not picked us up.  I felt instantly relaxed and happy though I had not been aware I was worried.

We packed up, checked out, and ‘Dan the man in the white van’ came for us.  There were others aboard already and we picked up at another 2 hotels before heading off down the main road towards Lautoka Harbour.  Now I use the words ‘main road’ because it was the road between the two towns.  We rocked, we rolled, we jolted; we hurtled past cars doing it sensibly, and dust billowed out behind us, and eventually we reached the harbour.  We were instructed to use the loos if we wished as the boat trip was to be about 90 mins and no loo on the boat.

The boat was pretty small but the 12 of us climbed aboard and we discovered that one of the families were the managers of the resort.  Obviously well used to the journey, the dad and son kicked back and slept for most of it, despite our bumping over waves! 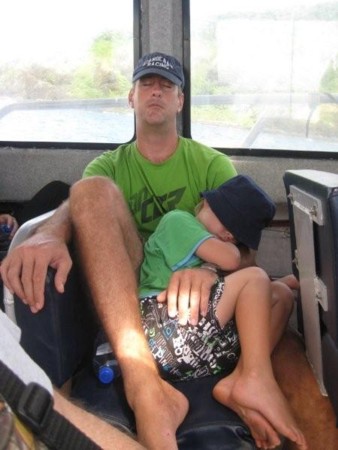 And soon we were sailing a narrow channel between 2 islands and then up the west side of Waya Island to see the grass-roofed dining hall snuggling amongst the palm trees.  An even smaller transfer boat came out to greet us and took half of the passengers ashore and then came back for us.  The Traditional Welcomers had sung their bit and done a bunk before we hit the shore – we did laugh!!!

All the newbies were assembled and seated between the dining hall and the pool and given a fresh fruit juice while we received our induction from Jim.  Jim was a gorgeous Fijian chap with the cheekiest smile and he called me Miss May for the duration.  Once we’d been told what we needed to know we were led by a house-maid down a narrow pathway between lots of greenery to our buré (house).  It was so cute.  SO cute!  Better to put pictures here than gabble on I think. 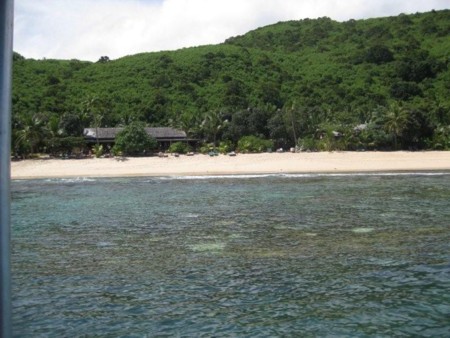 View from our bure door 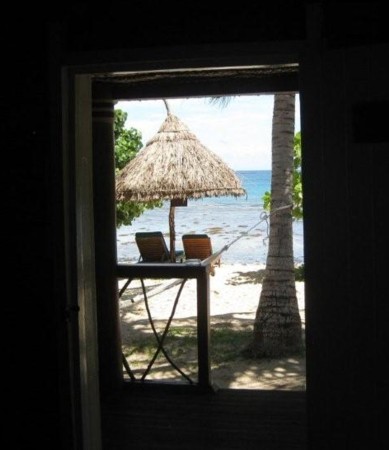 View from our verandah 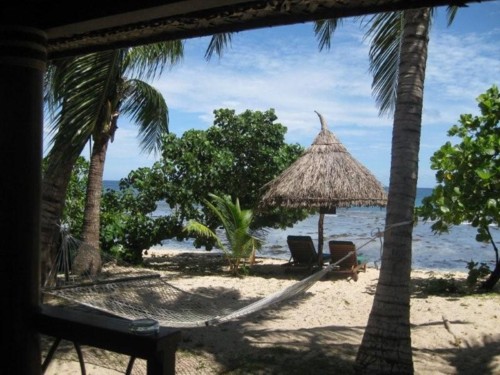 There were fresh flowers on the bed between the clean towels and these were renewed daily.

In due course our cases arrived and we got ourselves settled.  Possibly because of the humidity, the little wardrobe and the bathroom cupboards smelled most odd so we decided to leave our clothes in our suitcases on top of the single bed and just use them from there and this worked fine for the whole week. 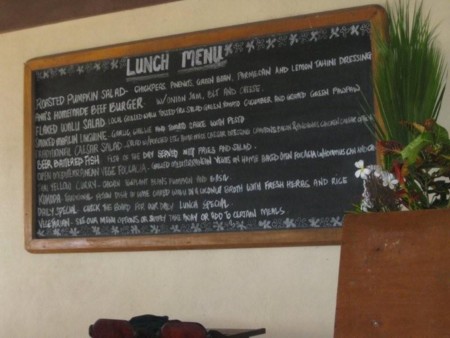 in the dining hall plus there was a daily special each day.  I was most impressed with the vegetarian options and even more impressed with how they tasted!  All of the meals were truly 5 star for the entire holiday.

We’d been told that meals are ‘communal’ in that all of the tables seat 8 people so you obviously need to share a table with others.  As it happened, lunchers arrive and leave according to their own schedules so we lunched alone; and that was very nice to do.

In the afternoon we walked along to the far end of the beach and sat on some rocks for a while before meandering back again.  The sand was unlike any Perth beach in that it was on a steep angle down to the water and was very soft even where the water was lapping.  Above the water level it was so soft that we sank to our ankles at every step so it was wonderful exercise walking along and of course the views were spectacular of the beautiful turquoise ocean, the beach, palm trees, mango trees (oh for them to have been fruiting!!!) and the mountains behind. We had planned on running along the beach every day for exercise but this just could not be done.