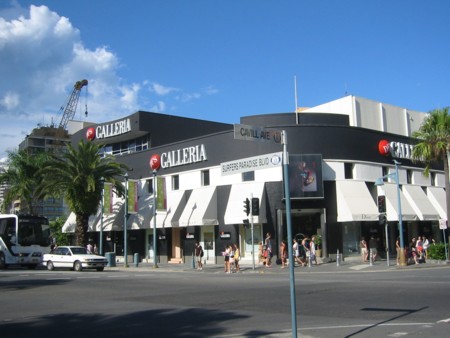 surname Cavill.  I’d promised him I would take some photos for him and I think we did him proud, and then we headed back down south to the hotel. 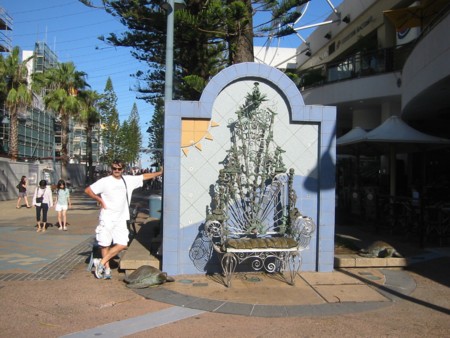 We decided a swim in the hotel pool would be nice so we eased into the water which was just a little cool as it inched up our tummies, but then swam a leisurely circuit under the foot bridge and around the little island, stopping back where we’d started to chat for a minute.  Then we started around again and I (on the inside lane) suggested that we race by walking the circuit.  There was one spot that I could barely reach on tip toes and of course David’s extra height (was going to put extra 4 inches but I’d better not!!!) gave him an advantage as he was still flat footed and could propel himself better.  He won, just, but we’d had a lot of laughs on the way around and he’d done well because he was on the outside so had further to go.  Next we swam one round, also as a race and he won that too.  One last round where I tried to do what I used to love, swim with only my arms moving and then only my legs moving.  The arms only wasn’t a problem but it seems I can no longer swim by legs only, my chin kept trying to go under the water.  Oh well.

We’d had a lovely day so just returned to our room now and ate the remains of Swami’s meal for our dinner, along with a pile of fruit we’d brought from the Garden Café once we’d said goodbye to Swami earlier.

David suddenly realised it was Thursday night and turned on SBS to see if Inspector Rex was on for me, and it was.  We’d missed the first 5 minutes or so but soon caught up on the story, so that was a nice surprise to be able to catch that.

Fri 8th Feb
Today we’d planned to go to Tropical Fruit World in northern New South Wales which opened at 10am so we knew that was 9am Queensland time and managed to get up, shower and breakfast on lots more fruit so that we were on our way in pretty good time.  We found our way there without a hitch and arrived at 9:20 only to be told at the gate that they use Queensland time – groan!  Anyway, the place was open-plan so we wandered around and explored until it was time for the fruit tasting and the time passed very quickly.  We saw a huge lizard.  In actual fact we saw quite a lot of these before the day was out. 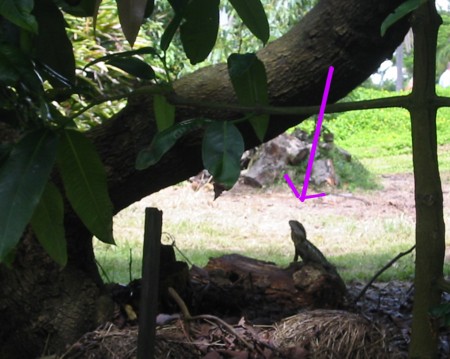 The fruit tasting was more talking than tasting but the presenter was incredibly interesting to listen to and I’d have happily stayed around and ‘chewed his ear’ but once the talk was over we were all ushered into a tractor ‘train’ and taken away 😉  Anyway, while he talked and enthused – believe me, he enthused, he put me to shame!!! – he did chop up fruit and we all got to taste red dragonfruit, jak fruit, mango, green sapote, star fruit and a couple of others while he was telling us all of their health benefits.

Oh, and I bought a frozen chocolate sapote on a stick in the café before the talk so I got to taste one of those too.  Very nice.  Very nice indeed!

From there the tractor meandered through the farm with the driver showing us various fruit trees and plants along the way.  I was surprised at the dragonfruit plants which were like a big zygo cactus and grown along wooden frames, and then we stopped under a macadamia nut tree and were shown how to use some pretty unusual nut crackers and left to feed our faces for a while before being loaded up on the train again.  From here we went to a little farm and everyone raced around looking at baby sheep, chickens, goats etc but they had 2 baby calves and that was as far as I got. 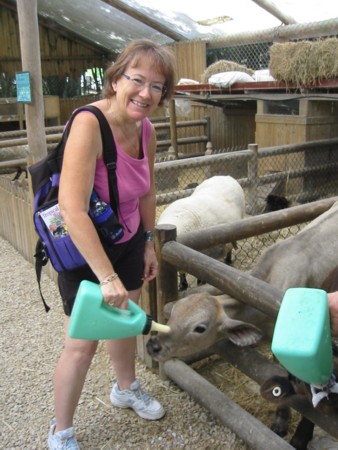 I totally adore cows, and it was so good to touch one again after all these years since working on the dairy farm when I was 15.  And it was feeding time so the guy gave me one of the bottles and I got to feed the calf which was so special.  They eventually dragged me, kicking, away from these and we were loaded on to a little boat for who knows what reason truthfully.  We sailed around a small island and were then dropped of on the island where there was a heap of play equipment, though the miniature train was broken down which was a shame.  David found a little mini golf course so we had a go at that but our attention was more on when the tractor was coming back for us as we’d have been there for another hour if we’d missed it.  We played about 6 holes I think and then everyone else, who was a lot closer to it, were climbing on board the tractor, so we both ran to catch up.  It was lovely to have a run and was the only one we did in the whole week, though we certainly climbed enough stairs and hills over all to feel that we’d exercised.

The tractor delivered us back at the beginning and we decided to have lunch there before continuing on.  We walked through the seating area of the café and all of a sudden, there I was, face to top-of-head with a person that I was preferring NOT to see!!  The reason we weren’t face to face was that she had her head down as she was cutting up her fish and chips.  Eeeek!!!  I shoved David, who was in front of me, to push him through without delay and it would seem that she did not see me, phew!  David went to the counter to order fish and chips (their only hot meal, the rest seemed to be scones and such) and I went through to their fruit shop and bought 2 very nice, large mangoes.

We sat and ate there as I had my trusty fruit knife with me and just peeled the mangoes and ate them whole, the way I like them best.  We were giggling like school girls about whether the girl I was avoiding would see us or not, and built a wall across the table with our 2 backpacks to hide behind if she’d come the short way around to go to the loos.  If she’d come the other way we were scuppered. But she didn’t.  Her hubby did, but he wouldn’t recognise us even if he looked at us face on.  Once we’d finished eating they were nowhere to be seen.  I would dearly have loved to go to the fruit tasting/talk again but David was not so keen so we called it a day and moved on to part 2 of our day.

From here we turned right out of the Tropical Fruit World road onto the highway and then left on to another highway – I was going by feel to get us to Murwillumbah, which did not turn out to be a good idea.  When we came to the next small town David went into an antiques shop to ask for directions and we had to turn back and reverse our journey and then continue on past Tropical Fruit World’s road.  Can’t win ‘em all.  But from there we found Murwillumbah easily, and from there followed our map directions to Uki to meet with another friend.

Once we got to Uki I said to David that we just had to find the Old Butter Factory but was sure we could ask for directions.  None were needed as this was right in front of us the moment we hit the small town centre so we parked and found our way in to my e-friend’s lovely, interesting shop.  It was so good to meet her and we exchanged hugs and came outside to sit for a while and just talk and enjoy being together.  It was such a joy to meet the people behind the names on this holiday.  After a while we went back into the shop and I bought a few things.  I could quite happily have spent twice as much but had to also consider the luggage allowance.  My friend also recommended we go to a shop back in Murwillumbah to see a friend of hers so, too soon it seemed, we hugged her goodbye and set off on our return journey.

On the way back we again passed Mount Warning National Park but were past the entrance before we knew it so decided not to bother stopping.  We stopped at a little fruit stall by the side of the road further along and bought a couple of things, bananas being one.  Once in Murwillumbah we found the naturopath’s shop with ease and had a nice browse around there and bought a couple more things and she asked us if we’d been to Mt Warning.  When we said no she said it was beautiful up there and that we really should if we could while we were so close.  What the heck, we headed back again.  It was only a few minutes really.  But the start of the journey back didn’t look right so we had to turn back almost as far as the shop and try again.  Second time lucky.

The road in the park was fairly narrow with a few fords across the river, but it was very pretty indeed and we stopped half way up at a little swimming hole.  Wendy had said we could skinny dip, but the swimming hole was already taken – not that we 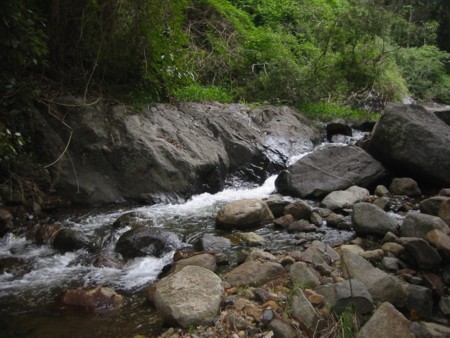 would have, it was late arvo by now and not hot enough for us to want to swim even if we’d have had towels with us, and we did not.  We enjoyed a look at the river bubbling over rocks though, and drank in the sound of it, and then continued in the car to the top car park.  This really was a lovely area – we ate a banana each and David put his peel in the boot but I was still eating as we walked.  When I finished it I was carrying the skin but David took it from me and threw it into the bush. 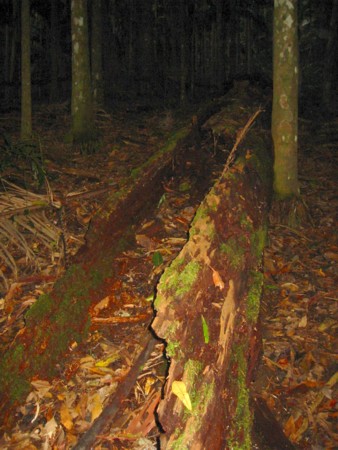 We climbed up to a lookout and saw some huge trees.  One was lying along the floor and we were amazed at the length of it.  It was fairly rotted out and with moss growing on it

which was so pretty.  I took photos but it was dark under the canopy of leaves so they didn’t come out as well as I’d hoped.  The length of the trunk just did not show in this picture.  It was at least 4 times the length you can see here, probably 5 actually. 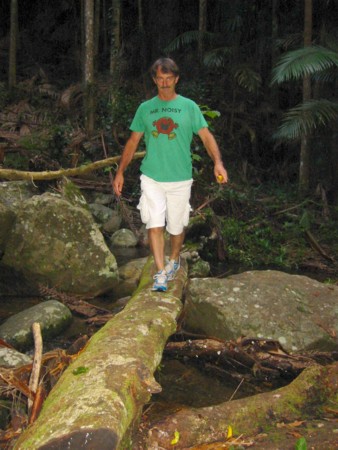 day with no tourists to eat, as they latched on to me in their thousands so we scurried back the way we’d come.

I said to David that I wished I’d kept my banana skin to rub on the mosquito bites and he was my daring hero and climbed across a log over the river and scrabbled in the bushes to find it again for me.  Awwww.

Yes that t.shirt says Mr Noisy.  Amie bought it for him for Christmas. She knows him well LOL