We both slept better than we had so far, which was still not brilliant, but at 8.15 there was a sudden scrabbling on the outside of the wall right next to my head. Big eyes and a sharp intake of breath! What the heck was that? It was something that sounded as if it had large claws! A kangaroo scrabbling for insects amongst the wooden planks? We got up and dressed to put the kettle on and then there was a weird noise outside near kitchen. This one wasn’t scrabbling, it was almost a chicken noise. We both went cautiously outside and looked around, and under, the cabin but couldn’t find anything at all. Was it a possum maybe? We’ll never know, but that was one way to wake up. Didn’t hear another sound again, and hadn’t heard either noise during our nights or days prior to that.

David commented that even by 9am each day the light was still very dim outside. I guess it was because of the tree coverage, because the sun shone brightly across the paddock from around 8am. This morning there were roos outside, peacefully eating the grass, and possibly pretending they hadn’t been playing pranks on us. When I went out with the camera they looked up, but decided I was harmless and went back to their chewing. 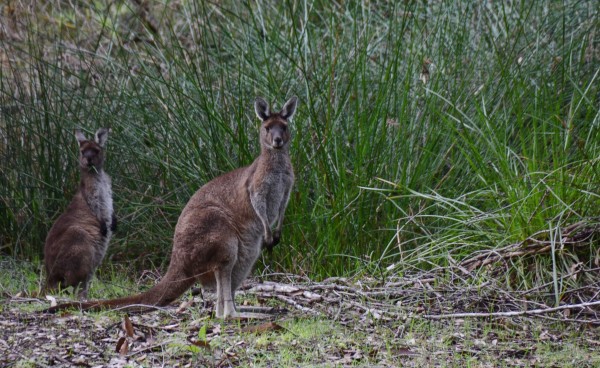 Roos by the Dam

We weren’t really sure what we wanted to do today, and decided on a walk around just outside the gate. As we reached the gate, I was photographing a maidenhair fern and David said “Look at this!” Amongst the fallen branches and prolific greenery was the framework for an old trailer! 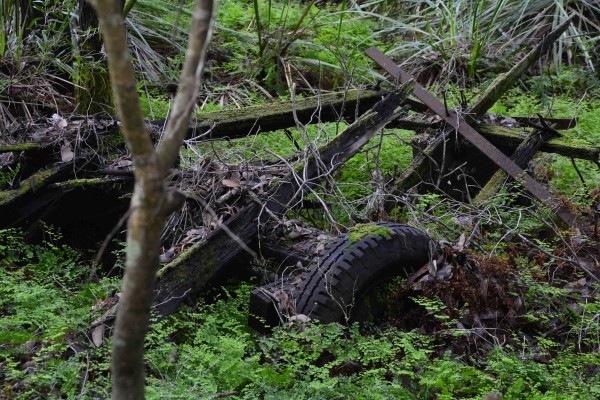 He’d done well to spot, and recognise it!

Up the road we heard an excited gaggle of wrens and saw the blue flashes dart in and out of a bush. It was lovely to see them, though getting a camera to them before they darted off is another matter! This was the best shot I got. 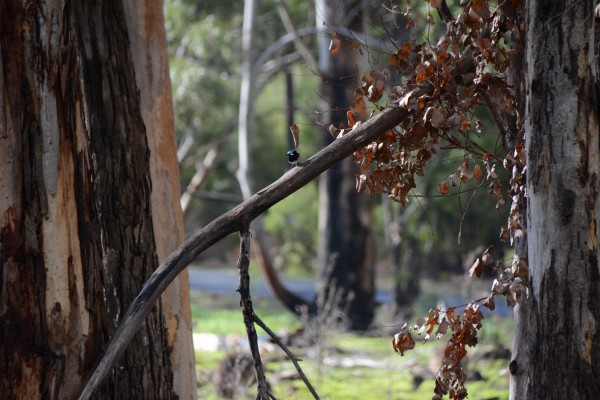 Just around the road from here was a broken and fallen wire fence, and inside, a paddock with a few fruit trees. There appeared to be lemon and mandarin as well as quite a large number of avocado trees with fruit all around them on the floor. The mandarins were a little too sharp, but the avocadoes looked good and we picked some up. There was a shack nearby but it had broken windows. David said there was some old furniture inside, but it definitely appeared to be abandoned. All part of the excitement of exploring I guess. There was also a once-well-worn track and we followed this. Glancing to the right, David suddenly said “Wow, look at this!” There was a large tank (of the water variety) on its side and, next to that, an abandoned Land Rover. David bet that if you had the keys the engine would fire up and run beautifully, but the body had very definitely seen better days! 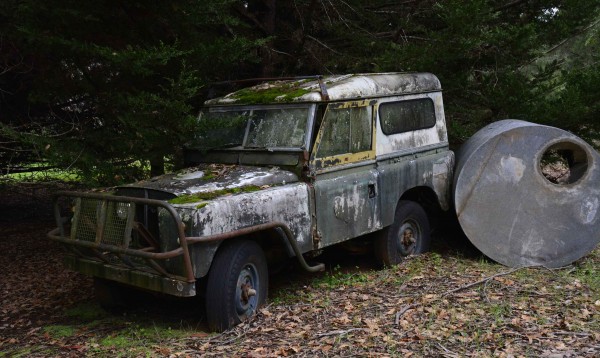 David photographed the car, and I got to the moss. No surprises there LOL 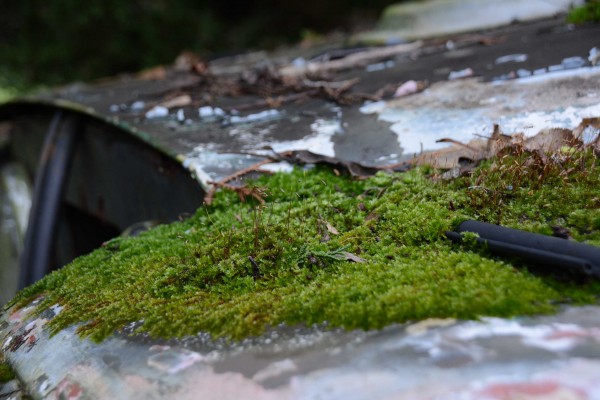 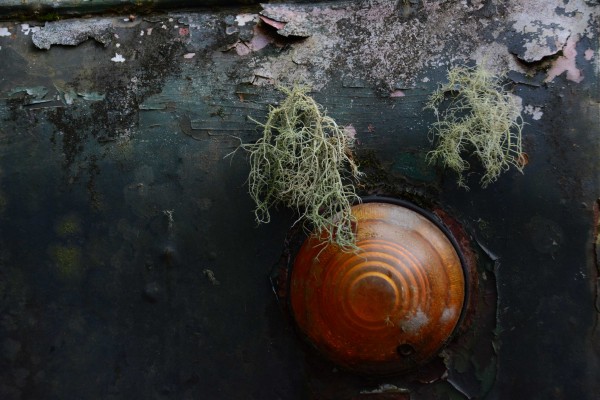 As we reached the road once more a car went past. That was novel! We were shocked when, over the next half an hour or so, 2 more came by. The roos were there again. About 8 of them eating peacefully. Then there was a flash of red and we saw a robin. I was so pleased! I’ve never seen an Australian robin before, and had only heard about them recently.

On the way back to our cabin we looked at the site games room that was mentioned in the brochure. It was cold, dark and very uninviting, although there was a light for us to turn on, a pot belly stove and fuel to start it, it was a fairly large and high shed with light showing through the plank walls and we went back to our own warm home. We discussed visiting Northcliffe and its sculpture walk, or Nornalup tree walk, but that was down on the south coast and a bit too far when we couldn’t guarantee the weather after the drive. While we thought, as best we could with the smoke alarm squealing, David cooked a nice bacon and egg lunch.

I’d written an email to our sons last night thinking it would go today but we didn’t get anywhere in mobile reception range. Never mind, they weren’t expecting to hear from us anyway.

We decided (yes, perhaps we are mad!) to have another shot at finding Goblin Swamp. So off we went, north on the Vasse Highway. We missed a road named Tobruk but took the next one, Carey. At every intersection, including Tobruk, which crossed it, the road degraded. Narrower, more muddy or more rutted. Eventually we gave up yet again and turned around. Left again onto Vasse Highway and there was yet another track but we didn’t take this one. Then, the next left, just before Carey Brook Bridge, there was a wide side-street with a caravan sign. We’d seen that yesterday on the way to Nannup but what we hadn’t seen was over on the other side of the highway; a tiny sign ‘Boat Landing Rd’. Whaaaat?? Boat Landing Road. The one that had been showing on the map as about 100 metres north of our cabin. And here it was over 3 kms north. It was a good quality, wide, graded road. Absolutely *not* hard to find if we hadn’t been told it would be. We could only laugh. We even had a car come towards us at one stage, it was a veritable highway! This was the name of the plant that the tram driver had told us about. Apparently the berries taste rather like a citrus, but you must chew the flavour from it and then spit out the residue. ‘Hence the name’ were his words, not mine. And here are some actual snottygobble berries. We didn’t taste them, not knowing if they were ripe. That’s our excuse that we are firmly sticking to 😉 There was also another tiny siding that I will come back to and was probably the place we’d been looking for. However, having been told it was hard to find, *and* that we needed to turn right onto Flybrook Road, we continued just to see if there was a Flybrook Road, and if that would be a better option. There was no Flybrook Road, but what *was* at the end of Boat Landing Road was a large gravelled carpark, broken up into smaller areas by trees. There were about 15 cars with empty boat trailers as well as some cars without an appendage. We were absolutely shocked to see such a veritable metropolis so many miles from anywhere! There was, apparently a tour bus with this as the destination; we’d seen the stop for it at the Karri Valley Resort, and obviously the people went from the bus to a boat for a river trip. We walked along the river-side a bit, which involved stepping over a few fallen branches, but weren’t enthralled enough to go far.

There had been a toilet block in the carpark and I made David come in with me to hold my handbag, camera and everything that wasn’t nailed to my person, because of course it was a drop toilet that far away from plumbed civilisation. The building was large, clean and made with new corrugated iron sheets. It had toilet brushes next to the pan and asked you to use them. The toilet brushes were chained to buckets which made me laugh. Nobody would ever get one back from the unknown depths if it was dropped in!

Back to Monty and there were official road signs in the carpark pointing to the left and saying ‘One Way Only’. David reversed out, and obediently headed to the left to be met by a dead end. What the heck? LOL So he had to go against traffic (there was none) to come out the way we’d gone in. Surely the sign was someone’s practical joke!

Now we went back to the little road we’d passed, marked as Goblin Swamp. We’d found it at last! David parked and we loaded ourselves up with umbrellas, jumpers, wet gear and cameras. I was a little fearful of the walking distance involved and didn’t want to get lost in the dark in the bush. Heading down a short mud-and-gravel path, we reached a pathway T-junction and there was a sign saying Goblin Swamp (left) 500 metres. Really? Awesome!

There were some gorgeous little wildflowers along the way and I photographed one early orchid. And then we reached a boardwalk that led to a low platform with railings to prevent us walking further, but we were here. Goblin Swamp! We had never seen anything like this before in our lives! The swamp was filled with paperbark trees. We’ve seen plenty of those even near to home around Joondalup Lake, but never like this!

David took more photos here than he ever has of anything in his life! None of the photos can fit the entire area in unfortunately, but I would guess the diameter of the area to be maybe 50 metres. And all full of the twisted character-filled ‘Goblin’ trees. There were faces and animals galore to be spotted amidst the tree branches. We saw dinosaurs and dragons, turtles and wizards, it was incredible. 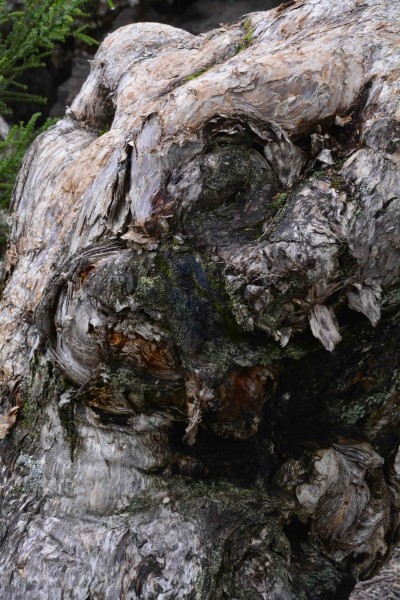 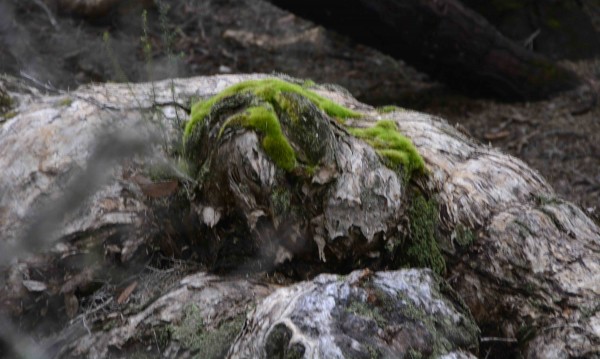 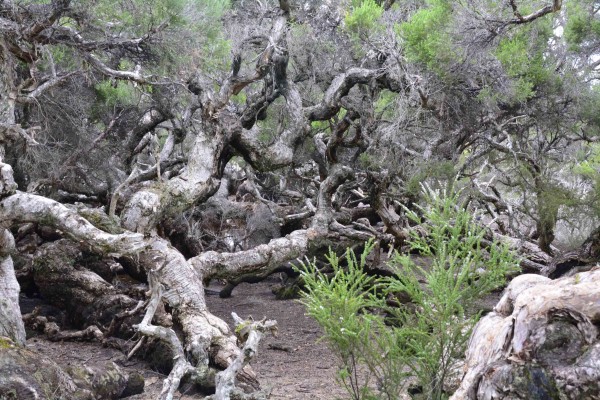 And then it started to rain so David handed over my umbrella. I stupidly took a photo of him with the normal everyday ‘bush’ behind him, and he took a much nicer pic of me with the actual Swamp behind me. Well, somewhat LOL However, my shot does show how strangely out of place Goblin Swamp would appear to be compared to the natural bush covering the rest of the area for hundreds of kilometres round about. 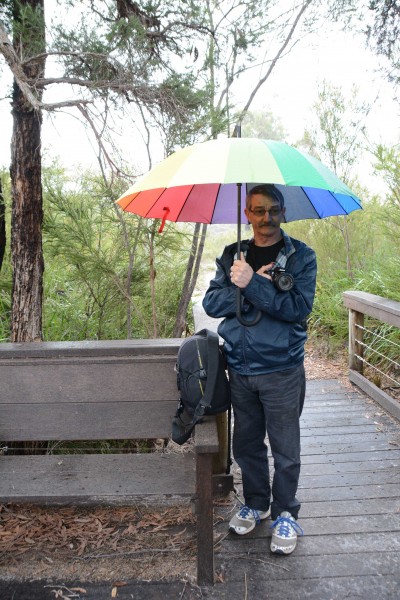 May at Goblin Swamp

Once we could finally drag ourselves away, on the way back to Monty, we saw some more gorgeous wildflowers, one of which was so incredibly tiny you could fit about 6 of these intricate star-bursts on your small fingernail. 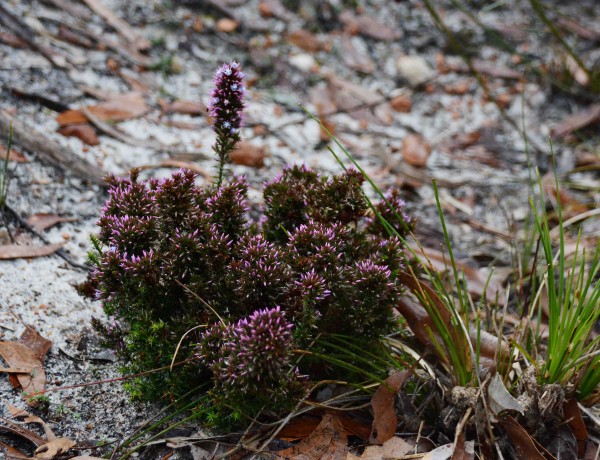 We fancied coffee, of the café variety, but didn’t fancy driving 30 km to the closest town to get it. David drove home and tried to light the fire, but the small supply of fire starters were gone and there wasn’t much newspaper left either. We’d had some new wood delivered on one day during our stay, but had been told to help ourselves from the shed for more, which David had done, but no more fire starters or paper. The owners had almost certainly never come inside the cottage at all, only supplying the bag of extra towels one morning and one lot of wood on the other. My OCD-level organisational skills weren’t thrilled with being given 4 fire starters for a 6-night stay, but as soon as David went to the office and asked, they were supplied happily and quickly. It was the first time I’d laid eyes on any other person in our small group of cabins. We’d seen a car at 2 of the other cabins occasionally, but never any people at all. On our final day, a man cycled past, within view of our window as it happens, but that was it.

David soon had the fire roaring merrily and we reviewed the day’s photos, enjoyed a nice prawn curry from dream pot, watched a little TV while I crocheted and then snuggled nice and warm in bed by around 10.30.