We slept well again.  This really was a comfy bed, which was so nice.  In fact the hotel room was very nice too and our little kitchenette with its fridge, kettle, toaster and crockery and cutlery was wonderful.  There was a little stove top and pots and pans but we don’t go on holiday to cook meals!  We had our breakfast of toast, this time with some honey which made a big difference, though the soy milk was still disgusting.  It just wasn’t worth trying to find another place to buy a different one so I put up with it, and promise not to mention it again 😉

The staff behind the reception counter at the hotel were also really nice.  You’ll often find hotel staff can be a bit snobby/elitist but these guys were really friendly, natural and helpful.

So today we walked down Collins Street and Swanston Street and found Federation Square, ready for when we would need it on Thursday to meet a friend for lunch, but also because this was where we could catch a free tourist bus to Chadstone Shopping Centre.  We walked up and down trying to find any sign of the exact spot to wait at for this bus and even went into the Tourist Information Bureau but that was chokkas and you had to take a number to be served so we went back to our own resources.  Eventually we found a small crowd of people sitting along a wall and hoped this was the right spot.  I was getting a bit flustered but David said “If we miss it, we miss it, it’s only a shopping centre” and I appreciated his wisdom, as I so often do, and eventually the bus arrived anyway.

Apparently you have to live more than 40 kms from Melbourne to qualify to use this bus.  We qualified.  It’s 3,300 kms to our house!  But nobody checked anyway.  I think the first few on the bus were asked, but the driver had got fed up by the time we reached the door.  The bus had been a good 10 minutes late picking us up but it was privately owned by the shopping centre, not public transport – and traffic affects everyone anyway!  There were really cute seat covers in the bus. 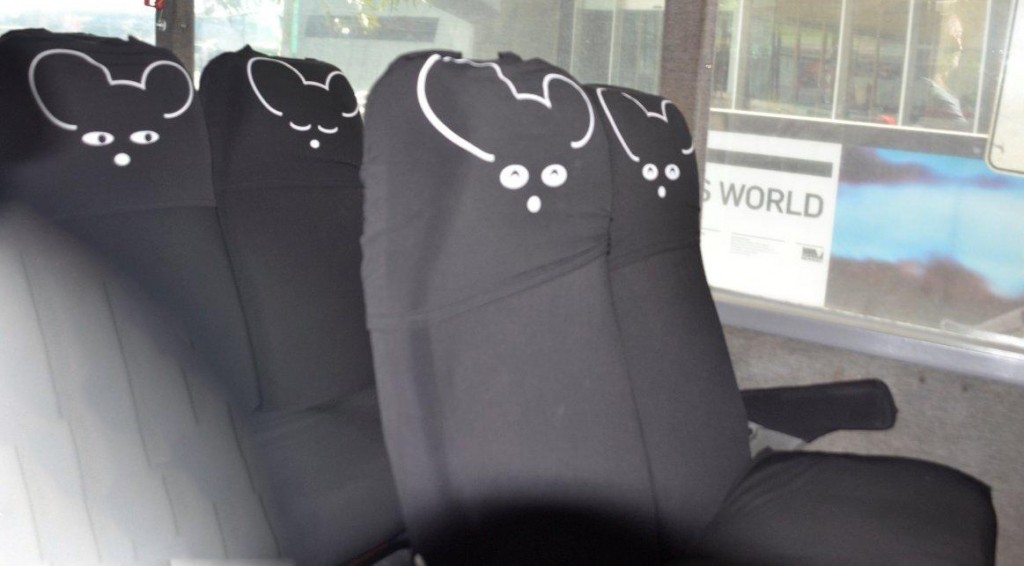 The driver, bless his heart, looked as if he’d retired from whatever job he used to do about 20 years ago.  And to a large degree he drove like it too.  We turned at, and went through, several red lights, though we learned later that this is apparently fairly standard practice in Melbourne, so I may have been judging him a little harshly.

It was quite a drive to the shopping centre, mostly along a fairly fast freeway, and we were glad we had not tried to make our own way.  One of the few complaints I have about Melbourne is that you can’t get on a ‘bus route’ tram and pay a fare to the driver, you have to buy a cash card, with money in advance, from kiosks and use these.  Well we had no clue how much we would use the trams so we did without, rather than spend money we would never use.  That doesn’t seem to have any thought for tourists at all.

You’ll be relieved to hear that there’s not a whole lot to say about the shopping centre.  Needless to say it was the ‘Biggest Shopping Centre in the Southern Hemisphere’ but it took us quite a while to accept this as the truth.  For the most part it was like every large shopping centre in Australia with all the same brands and more dress and shoe shops than anything else.  But there was one corner dedicated to designer label shops so that was different – for us anyway.  Prada, Gucci, and other such names that are just words to me.  Except for Tiffanys.  When we got to their door I marched right in, which threw David off his step because that was the last thing he expected *giggle*.   There was nothing that interested me in the front half but I found a few diamonds towards the back of the shop so I enjoyed a little admire of them as well as getting my own diamond ring under the display lights to make it twinkle too.  Why not!?!?  The best thing in there was that one of the assistants admired my hair tinsel.  I was so pleased!  A Tiffany expert being impressed with sparkles that came from a, ummm, slightly cheaper purveyor of fine goods – we’re talking the $2 shop here!!!  And then we left, not having seen anything that I couldn’t live without ROFL

We lunched in a food hall about ¾ of the way around the ground level and, believe it or not, had Subway.  It was nice to sit and people watch as we ate and to take a break.  When we go to new places – shops or markets etc – we always keep left and only look in the left side windows/stalls and eventually you get back to your start point.  In many cases you’ve even seen both sides – or if not then you start out again keeping right!  It’s always served us very well, but this centre had 2 ‘middle aisles’ so we had to just watch our route around there which involved going into the aisle and chucking a Uey at the end so that we’d seen those shops without going out the other end and getting confused on our keep left rule.

Soon enough we’d done the whole floor so we went down the escalators to the basement level and kept left again.  There was a fairly large Christmas tree down here that I took a photo of, but the best part of it is that you can see the Prada shop on the top right.  Compared to the trees we’d seen in Kuala Lumpur last year this one wasn’t very impressive though. 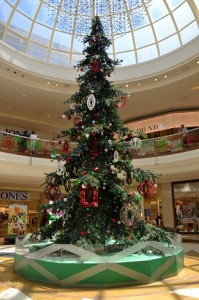 I found several places down here that had some nice gifts ready for family for Christmas and we laughed about whether we’d be the lightest shoppers on the bus.  I wondered if there would be anyone with arms full of carrier bags.

We finished in plenty of time – the bus wasn’t due to collect us again until 3:30 – he’d given us extra time to make up for being late in the morning.  So we decided on a café and sat and enjoyed a coffee for David and a juice for me and watched the people go by once more.  We also went into an Asian bakery and bought some coconut bread, thinking it would be nice for breakfast.  We could not find a ‘real’ loaf of bread in this bakery.  It was full of really fascinating things, and some things that sounded truly disgusting to our Western sensibilities, but not what we were honestly looking for.  And David got himself another bottle of wine.

Back at Federation Square we explored it, only to find it really small.  We’d understood it to be the ‘Meeting Place of the City’ and expected shops and cafes and restaurants…  Its architecture was interesting though. 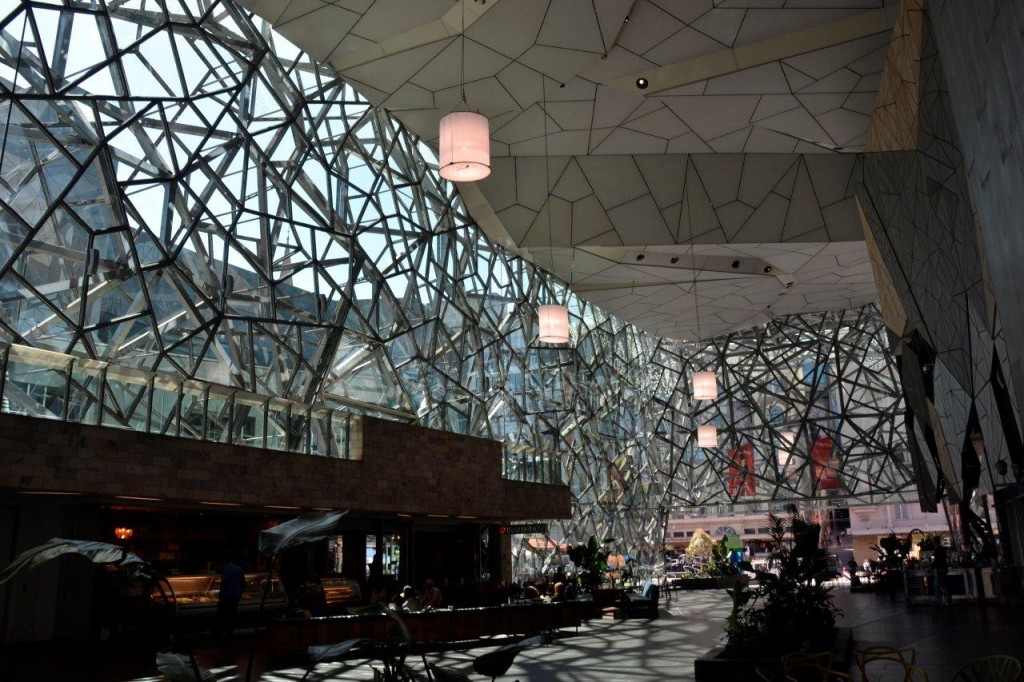 And there was a hidden camera somewhere out in a massive courtyard that displayed up on a wall so we had a photo of the video of us taking the photo.  We couldn’t *quite* pin down where the camera was though. 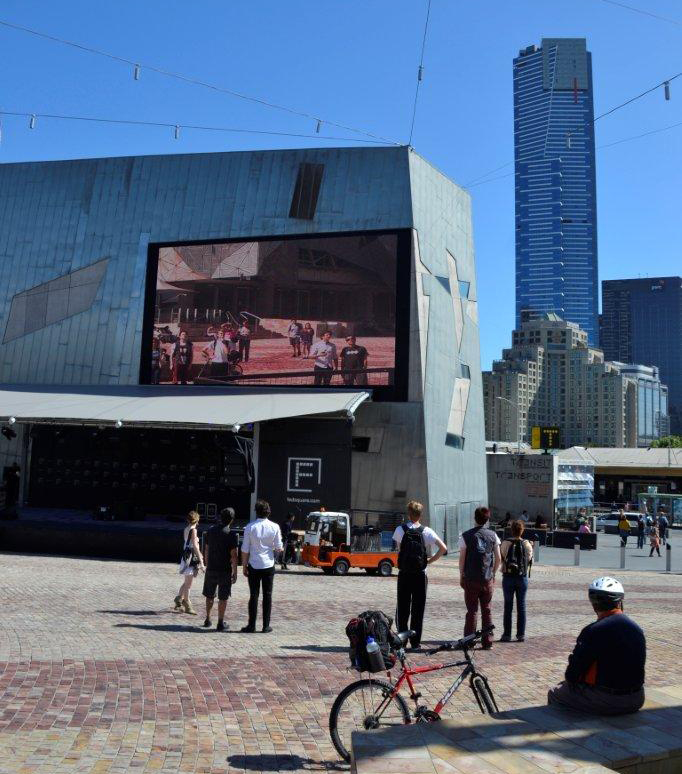 We decided to go over the road to explore another Cathedral.  This one was the Anglican Cathedral but, having been touched by the Catholic one so deeply, this seemed only interesting, not stunning, and we didn’t stay terribly long.  The only thing that really fascinated me was this very large and ornate carved wooden ‘cap’ for the baptismal font.  It appeared to be winched upwards when needed on chains to the roof and would have worried me a whole lot if it was my baby about to be held anywhere near such a heavy, insecure-looking thing.  It was a beautiful work of art, but a worry. 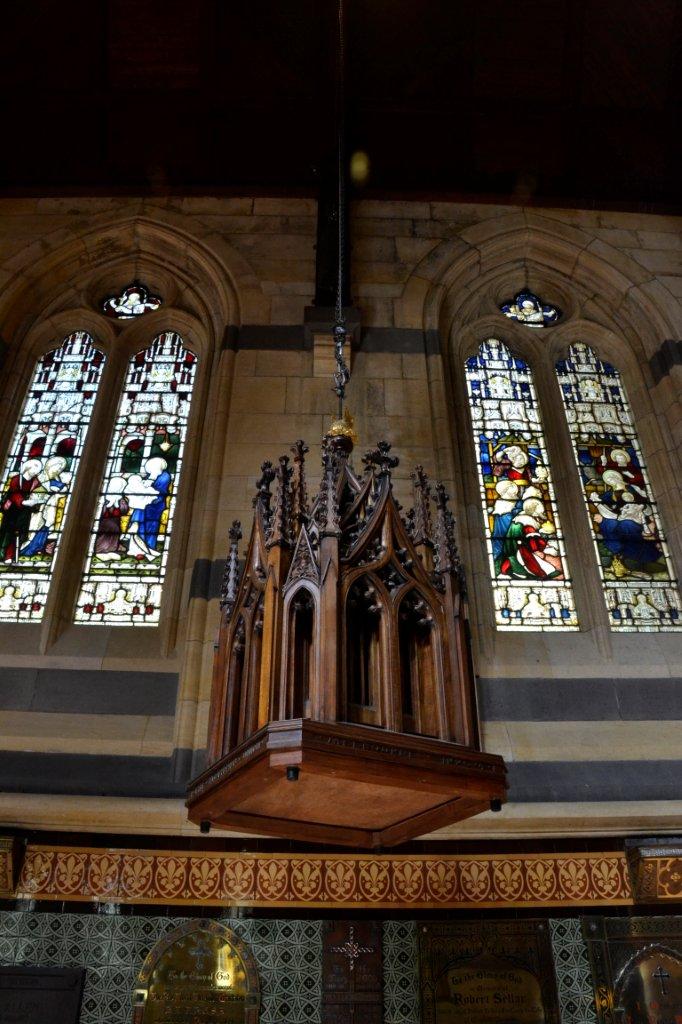 Outside the Cathedral in the street we found the horse-drawn carriage rank and grabbed a couple of photos and enquired after the price of a ride.  I *think* the incredibly hunky young man said it was $100 for the carriage for 30 minutes, no matter how many people you put in it.  Well we were only 2 people so that would have been quite a price and we thanked him and moved on. 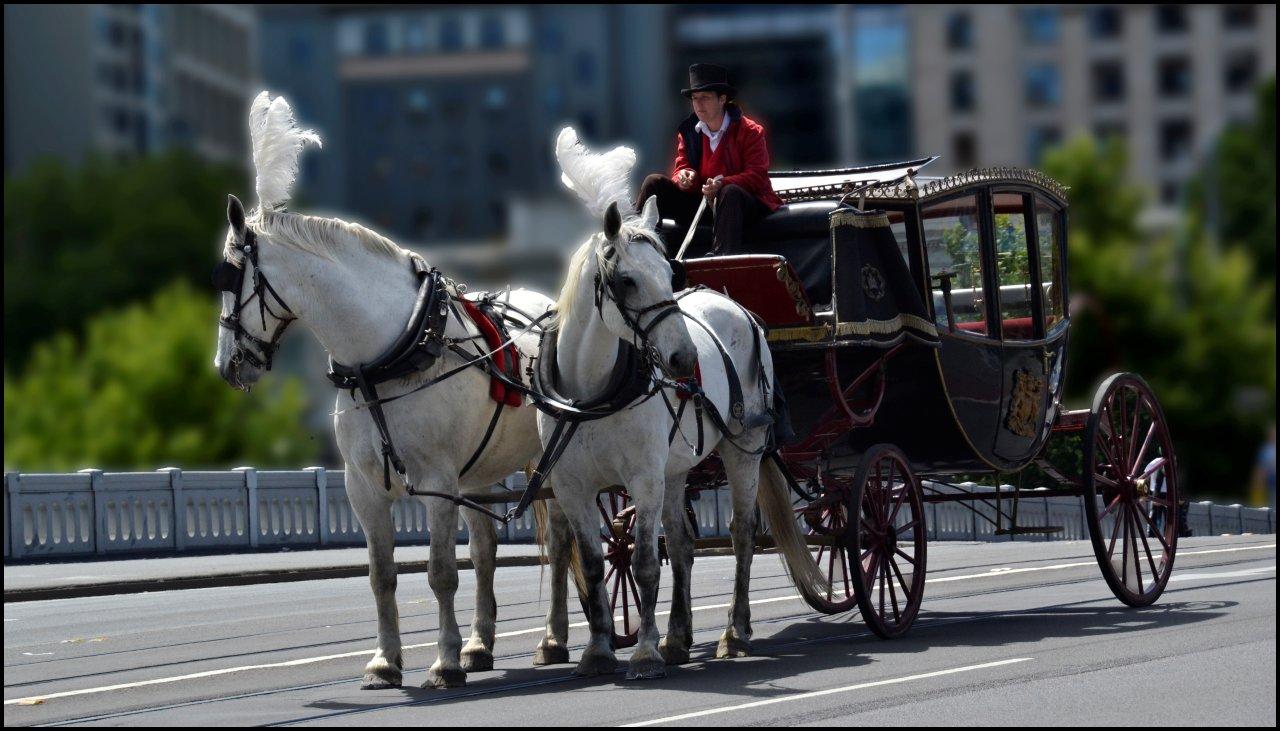 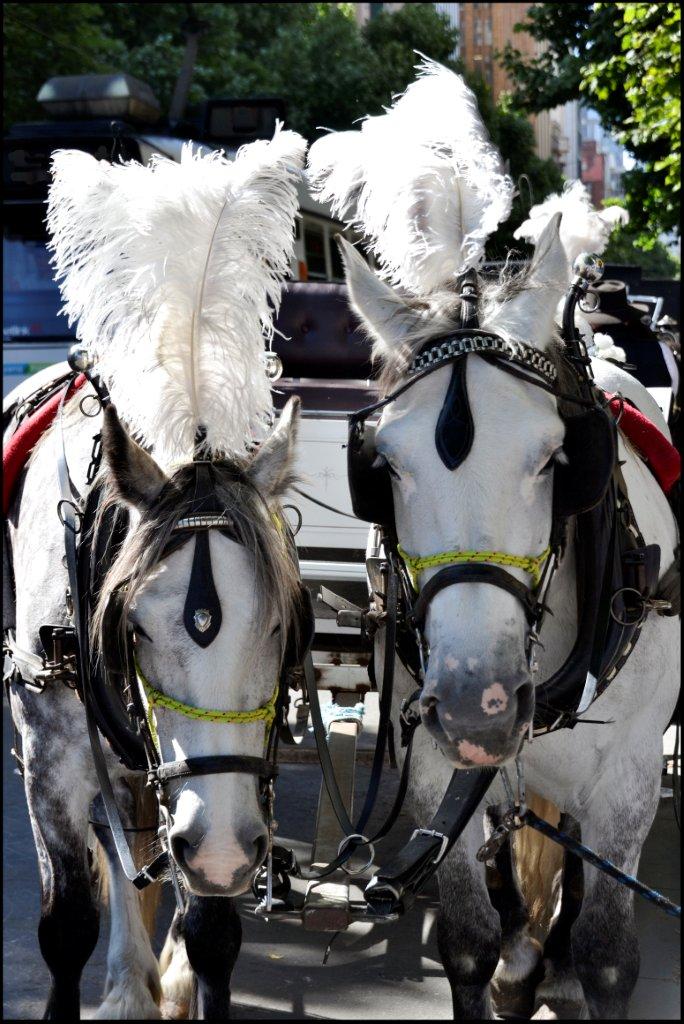 We walked down Bourke Street, then William Street to our hotel.  No point going the same way twice!  And then got changed to go out for a run.  We jogged gently down the Market Street hill against the cold, strong wind that always seemed to be blowing there, and then down to the river.  As soon as we turned left, and away from the ‘tunnel effect’ of the road, the wind dropped and we were able to run in perfectly cool temperatures with no head-wind.  All along the side of the river was perfectly flat except for some occasional slight ramps up towards foot bridges, but then always the down slope the other side.  It was absolutely, to us, the most perfect running space we’ve ever enjoyed.  We just ran, and ran, and ran and David was getting really surprised that I had not stopped yet for a breather, but the scenery was empowering and beautiful.  The river didn’t vary much in width and there were occasional rowing boats – the 8-person ‘hurry yourself up’ kind, not the ‘row, stop, glass of wine and ‘will you marry me’’ kind.  The running surface changed from bitumen to fine gravel but it was solid enough to still run happily on and eventually we could see another bridge in the distance.  I decided that I would make it to there and then take a breather.  We were both very proud of me indeed.  We walked over this bridge as the traffic was starting to build up – being decorous grandparents tee hee!  But once back down to the river side, over the bridge, we began to jog again.  This time we alternated jogging and walking for the return journey.

I’ll pop this photo of a bridge in here – it’s out of order from when I took it, but it doesn’t matter.  I just like the angles and the arches. 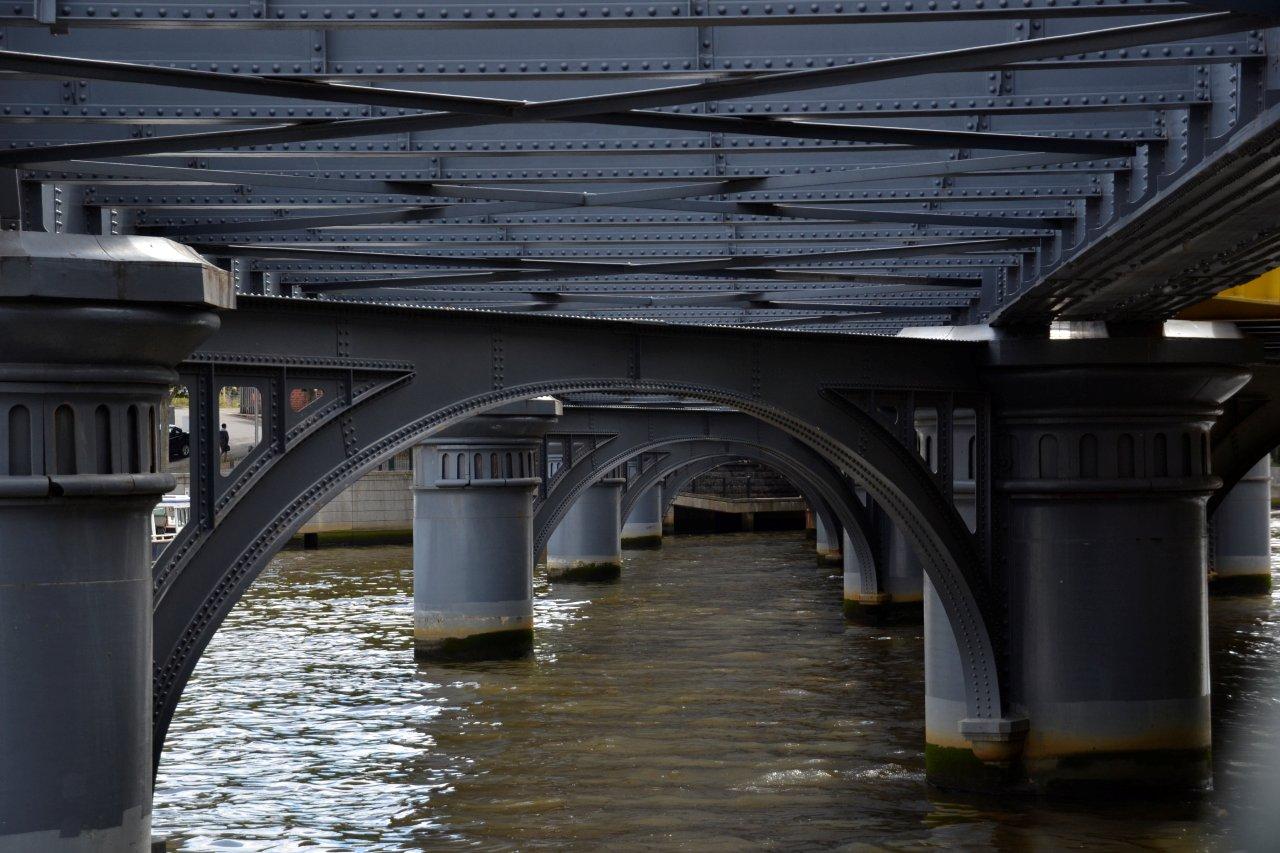 Under a Yarra River Bridge

We jogged along on a little tow path with a grass slope to our left and then came upon the storage area for all of the rowing boats that we’d seen.  David looked into the first shed and could not believe his eyes on how many boats were in there.  Then there was another shed, and another, and then a 2-storey social building and I think more sheds (2 more?).  Soon after that we went under the arches of a bridge and came out at the eastern end of Southgate Shops.  We continued to jog along here, looking again at the restaurants along the frontage as we went, and then in no time at all we were crossing the bridge back to Market Street and our room for a shower.

If the requested maintenance man had come to look at the shower he didn’t appear to have done anything.  The water still dripped out more like a leak than a fully turned tap, and the temperature took longer to adjust than the shower and hairwash combined afterwards.

Once we were fresh again, and it was getting dark outside, we went down Market Street once more but turned right before crossing the bridge and chose our spot to take photos of the Fireball Show. 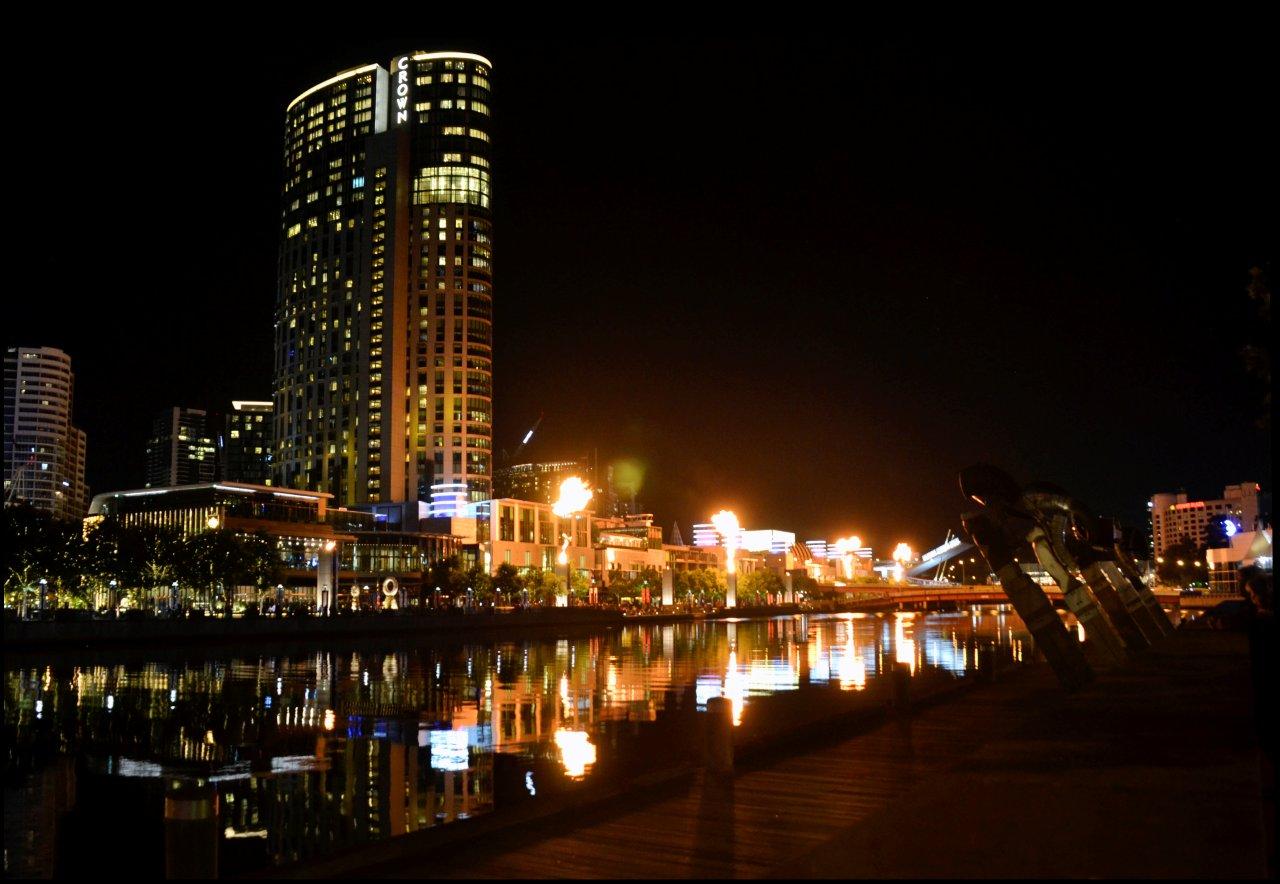 And then we went to bed early so that we could awake fresh for tomorrow’s adventures.