21st July
We got home around midnight last night.  The world is still moving for me as I seem to suffer ‘land sickness’ after every flight or cruise for a day or two, but it’s just odd feeling and doesn’t actually make me sick, so could be worse.  I just still feel as if I’m lurching around suddenly and then it passes again for a short while.

The weather in Cairns could have been kinder to us – our last day being the only one which was fine and warm – but it did not ruin the holiday by any means.  Except for the day we went on the yacht to the Great Barrier Reef.

We booked a coach transfer to get us to the yacht and waited outside the hotel at the nominated spot as directed.  Got out there early of course, being us!  And we waited, and waited.  Waved goodbye to everyone else going on their trips elsewhere and were eventually left alone.  In the end it was almost ¾ hr after we should have been picked up so David went back to the hotel reception to see if they knew anything.  They rang the yacht and it seems that we had not been included on the list of people who needed the bus!  So the hotel rang for a taxi and we were raced quickly to the yacht as the whole cruise was being held up waiting for us.  The yacht people reimbursed us for the cost of the taxi but told us we had to find our own way home again.  Why couldn’t we go home on the bus?  Who knows.  As we boarded the yacht we got ‘looks’ from some of the others as they’d been delayed waiting for us, but of course it was not our fault! 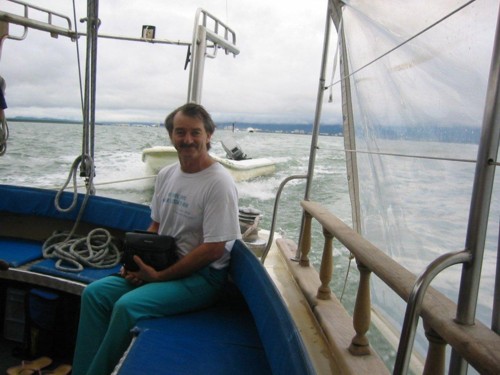 It was choppy and overcast and too cold for me to venture into the water.  David did go and was thrilled he had, and really enjoyed his snorkelling, looking at the coral and was amazed at how many and how colourful the fish were.  We also went on a semi-submersible boat but it was lurching so badly that I had to lay on David’s lap with my eyes closed and did not get to view more than the first 5 minutes.  I was fully dosed up with Kwells, but they didn’t even help in that.  They did keep me good for the yacht cruise though, so not all bad.

The yacht crew were a wonderful, fun, vibrant and caring group who took great care of us all – particularly those who felt sea sick.  We had a lot of laughs, despite some language barriers with 2 Korean boys and 2 German girls.  Only 1 of the Koreans spoke a little English, and not the one that got travel sick, but they were still looked after brilliantly.  We had another Asian couple who looked to be fairly newly wed and another German couple, and 2 Scots boys.  There were heaps of Germans around all over Cairns.  The cruise was just 35 people all up plus the 4 crew – very personal and friendly service with a lovely buffet lunch and on the way home cheese, biscuits, cake and fruit.  All of the crew were fun/mischievous which was right up our alley. 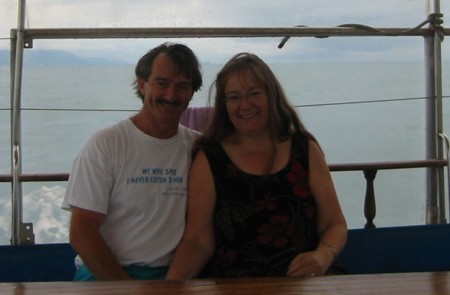 One of them said something to David about how he was looking after me, passing me cheese and biscuits, and David replied “I’ve been married to that for 31 years.  That’s quite an investment so I have to look after it!!!”.  They laughed like mad and I just grinned and shook my head.  I got 2 new boyfriends on the cruise though, the 2 Scots boys.  They were such characters, and so interesting to speak with, but as always it was David I came home with.

Overall it was good to have a change of scenery, some warmth (compared to Perth nights anyway), and to be somewhere that we were not bothered with visitors, phones etc etc.  It was a good break despite not quite being the weather it was meant to be.  I’d so looked forward to gently bobbing on the ocean in the yacht with no motors going, and diving into the blue ocean from the back like they do in the movies.  But it really was too cold.  The yacht had wet suits people could hire for $5 and some people hired them just for the warmth.  One poor lady got 2, on top of one another, but was still shaking with the cold after she’d been in the water.  And she was from Canberra!!!  We were all transferred (in batches) via the life boat to Green Island so we could look at the resort there and enjoy the beaches.  The sand was very white, but quite a harsh texture compared to Perth beaches.  The life boat trips were great fun as Jason hammered it and we were riding very rough over and into the waves, getting wet too, and we were all laughing with glee.  The way he steered the yacht was something that tickled us no end.  See below. 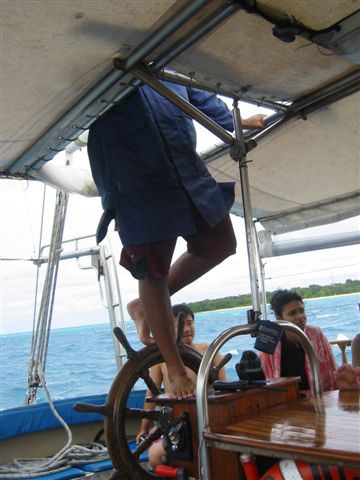 Well it would seem that the girl crew member took a shine to us as she offered to drive us back to our hotel after the cruise.  We were very grateful for this, as you can imagine.  She told us that she finished at 6pm, it was now 5pm as were were getting off (I mean disembarking!) and that if we went over to that (pointing) hotel and had a drink in their bar she would come and meet us there.  Lovely!  We looked like a complete mess – wind blown, salt in our hair, me still wrapped in towels as it was cold even on land by now, but sat down for a nice warming drink.  And another.  And time passed, and nobody arrived.  Gotta laugh considering we’d been forgotten on the way there!!!

Next page/… Please feel free to leave a comment in the fields below before leaving this page. Email addresses will not be used in any way, nor displayed for anyone to see.