Our next destination was Tong’s Thai restaurant back in Murwillumbah. We’d promised ourselves a Thai meal on the holiday and it was now a decent hour to expect the restaurant to be open so off we went. The restaurant was at the side of a pub back on the main highway with a lovely view up the incredibly wide river. The service was fine and the food very nice. We had soup – I adore Thai soups and can never refuse them – and a tasting plate of entrées which was also very nice and then 2 dishes, honey prawns and chicken satay with some noodles. Much too much to eat on top of what we’d already had but too darned nice to waste, so we asked for a doggy bag to take home.

Now I haven’t said, but it seemed there was no room servicing in our hotel. I’d had to ring reception to see what to do about our kitchen bin which was fast filling with fruit scraps and had the potential to smell rather unpleasant if left for the whole week. We were told there was a rubbish chute around the other side of our floor and to collect a new bin liner from reception, which we did, now we knew it was our responsibility. But when we got back to the hotel the people across the hall from us obviously had not enquired, they’d simply tied a knot in theirs and dumped it outside their door. We had a bit of a giggle about that.

We decided that a walk along the beach would be nice so pottered down there with cars doing nose stands to stop for us to cross the 2 cross-walks. We walked down the sand and just stood in the dark looking out to sea with me tucked under David’s right arm. We were there for ages, I don’t know how long and I felt so full of love for him that I just thought I would burst any moment. I said to him “I love you tooo much! What am I supposed to do with it all?” and he replied “That’s easy. Share it out with other men!” Not exactly the jealous type is he? We had a nice walk along to the breaker which I guess is the marker where Kirra Beach starts and then came back through the park and then along the restaurant strip to our room and called it a night.

Sat 9th Feb
This morning was our ‘chat’ by Wyndham Resorts in exchange for our free holiday so we had to set an alarm to be there by 8:30. I think we set it for 7am, groan! 7am alarms and holidays don’t seem to go together somehow do they? But for 1½ hours to earn another 7 days holiday, well I guess it was worth it. We showered quickly and had breakky and decided to walk as it was only about 1.5 kms to where we wanted to be. We went by ‘feel’ as to which road we took and ended up climbing a hill steep enough that the footpath for a good half of it was steps – and big ones at that! We later told Swami about it and she said “Oh no, not Kirra Hill?” And it was. Anyway, we enjoyed that little challenge although it did make us a bit ‘humid’, but once we’d arrived at our destination it was nicely air-conditioned and cool.

The sales reps plied us with coffee/tea/biscuits/iced water. David had the coffee and I had the iced water, and a couple of each, as it turned out that our 1½ hour chat ended up being almost 3 hours!!! We hadn’t realised we’d been in there quite so long and when we came out David looked at his phone to see the time as we’d arranged to meet Swami at 11:30 further up the coast. Well because we were rushing he forgot to add the hour from Perth time (which our phones were set at) to Qld time so we didn’t realise just how late we were. We walked as fast as we could around the base of the hill and I said that I’d ring Swami as soon as we got back to the hotel, not realising it was already time we should be meeting her. Anyway, Swami rang me to give better directions on where we were to meet and it was while I was telling her we were late that David realised by how much. Swami very kindly said not to worry and that she’d do some shopping until we got there. And she did.

We raced back to our room, grabbed some fruit and water and headed for the car. Fortunately, again, we found our destination without any fuss at all and rang to say we were there. We met Swami’s son Zak for the first time which was such a pleasure as I knew him electronically a little already. We decided (or I pushed my opinion, one or the other hehehe) that I would go with Swami so that we could chat on the way and David would follow behind. Zak, very understandably as he’d only just met David, decided to come with his mum.

I couldn’t tell you a lot about the journey as I was too busy talking, but we began to climb some pretty steep roads – better than any Perth could offer if you want narrow, steep and winding. And there were a few single-vehicle width bridges too. The steep, wooded mountain-sides were very reminiscent of Europe, but with regular palm trees amongst the other trees just to make its own Australian statement. And eventually we arrived at Springbrook National Park which was home to Purlingbrook Falls.

Hunger called us all and we found a nice bench in semi-shade and spread out our ‘no fuss picnic’. I’m afraid we did not contribute a fair share to this at all as we’d planned on buying more on the way, which of course had turned into a mad rush but, thanks to Swami, we had a nice spread. Swami had her beautiful dehydrated nori crackers, avocado (a round one!!! like a ball, not the pear shaped ones we get in Perth), tomatoes, some dolmades which were Zak’s favourites and some hot cross buns. We supplied a mango and I think 3 bananas – so embarrassing!

While we ate we were also eaten. There were some hungry mozzies up there! But this time we had banana skins to rub the bites with.

Then we packed up and put things in the cars ready for our walk. A short amble through some trees took us to a lookout over the falls. You can see the top part of them through the railings next to David. 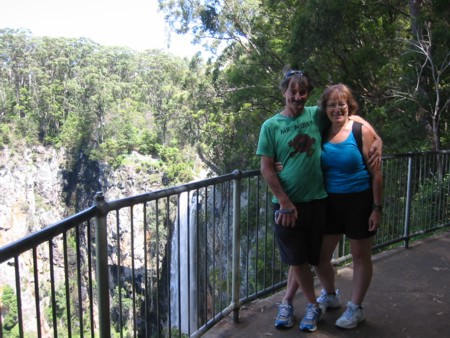 It looked a veeeeeeery long way down there and I was not much looking forward to the climb back up – already. But we all set off bravely.

The path meandered left and right, zig-zagging down the steep hill as these things tend to do. At best it was wide enough for 2 friendly people to pass, but it was often better for one to stand aside for others to go through. I began to get mystified that nobody coming the other way was puffing and mentioned it to David, who then made it his mission to enquire of everyone coming back up if it was a hard climb. They all said it was easy! Swami and I chatted as we walked – would you believe?

Next thing we knew there was huge excitement as there was a snake on the path. The little thing was only about 6” long but very feisty! It was waving its head around in a most excited fashion which stopped us all in our tracks rather as there was no way to continue except for stepping over his head. David, the brave hero, got a stick (which was about 4 feet too short in my opinion!) and tried to usher it into the scrub at the edge of the path. The scrub was plenty wide enough for a snake to walk amongst, but not humans. And we cautiously proceeded. Down, down, down.

Eventually we got to a wooden foot bridge across a small stream which was coming from a waterfall, but this was not THE falls it seems and we continued further. The people coming towards us were now appearing to be rather wet and some looked cold, though it was not a cold day. We soon found out why. The falls really were thunderous down there and there was spray everywhere – all of the sides of the cliff were running with water, partly spray and partly their own water sources from high above. It was very pretty, but the footpath was strewn with heavy clumps of plants which had obviously been washed from above with the quantity of rain they’d had of late and we all hoped that none would fall on us. From such a height I think it would knock you out for sure and even if not, would be a very unpleasantly wet shock to the system!

We were so busy stepping carefully over these soggy gelatinous masses, and in my case trying to shield my glasses from falling spray, that I’d gone through the back of the waterfall before I even knew it. The spray lightened up and when I lifted my head I’d missed the experience I’d come for!!! This is what I looked like. Shielding my 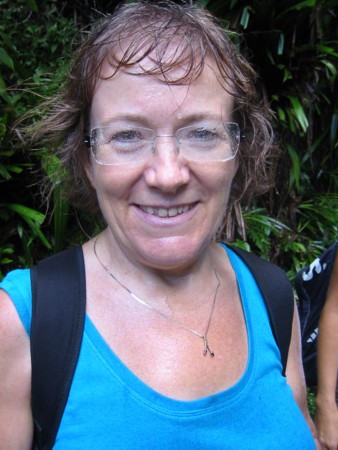 Waterfalls and glasses don't go together

glasses had not worked at all eh? hehehehe  I have almost a phobia about water splashing into my face and hate not being able to see clearly but both had been inflicted on me, like it or not.

Usually the walking route is a circuit and we would continue on but the heavy rains had caused 2 landslides on the other pathway – we had seen them, looking across, from further back on our own path – and we had to turn back and return the way we had come. I’d have gone behind the waterfall again anyway as this is what I was so excited about doing and the whole reason for the trip.

I decided I didn’t care about getting wet, I just wanted to enjoy this experience and drink it in, so back behind the water and this time I took some photos from behind it, getting even wetter. 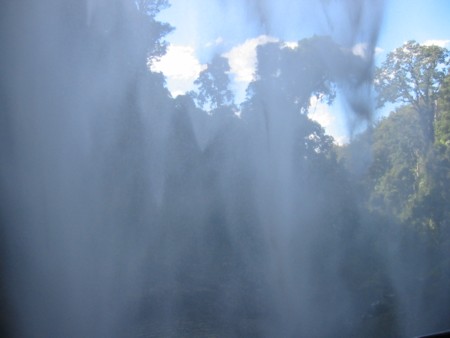 Isn’t that beautiful? Standing behind it was so wonderful and fulfilled a childhood dream since reading an Enid Blyton book named ’The Valley of Adventure’, when I was maybe 8 years old, where the children hid in a cave behind a waterfall.