Bearing in mind that we’d had an ‘executive spa suite’ at the Rockford Hotel the week before, and had booked the same again for this night, you can imagine our surprise when we entered this room to find it near on palatial.  It had an entry hall with the (only) wardrobe behind the door (huh?) and a kitchenette with kettle, microwave and fridge; then a huge lounge room with a TV, lounge suite, coffee table, 2 fancy chairs and a desk 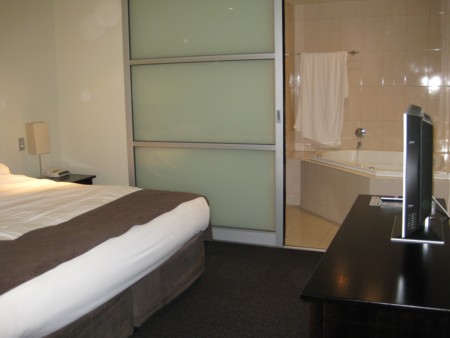 plus a table with 4 chairs; a huge glass sliding door leading to a large bedroom with another TV; another huge glass sliding door leading to the spa in a room of its own and then a doorway without any door at all to the bathroom.  The bathroom even had twin showers in a single large glass-walled cubicle.  The whole suite was beautiful.  And it had net curtains!!!  That was my biggest bug bear about our previous room here – no net curtains!  So either we’d been upgraded now or we’d been diddled on our 7 night stay.  We never did ask.  Both agreed it was better not to know and avoid the stress.

We opened our cases and sorted them out neatly, putting dirty washing in David’s and all the ‘doesn’t need washing’ and bathroom things in mine, gifts in our hand luggage, valuables in my handbag.

We were hungry but didn’t feel like going out for lunch so we ate the packets of chips.  The ones we’d bought long ago in Woolies in the Rundle Mall in case we got hungry on the boat LOL.  After that we had a shower, both at the same time which was fun except for when one bent down for the soap the other got head butted into the wall.  OK, it was done gently and on purpose, and revenge is a sweet thing when you’re joking!  Eventually we got sensible enough to freshen up to go out for a walk; not to anywhere in particular, just a wander around for a last look really.

One place we did decide on was the Jam Factory.  After two failed attempts to see it during our full week we decided it was now or never!  It was open and there were half a dozen or so people there making what appeared to be vases with a light blue inner lining and a dark blue outer.  One guy called up to us on the viewing gallery at one stage to explain what they were doing and it was good to just sit there quietly, fascinated by the things the students were doing.  I had to giggle at one girl who was having to blow into the long tube while a guy was rolling it backwards and forwards across a 3 foot wide bench!  I felt sorry for her as she obviously felt silly trying to keep pace with it and not always winning!  This was a very different experience to watching glass blowing in Venice.  To be fair, these were students and the Venetians were trained professionals but this was very slow indeed by comparison.

We didn’t go anywhere else meaningful, just wandered through the city.  For dinner we’d decided not to risk a new restaurant that might be a disappointment but to go to the Alphutte again.  I’d actually had this in mind for over a week and David never cares where we eat so happily agreed.  So in our wanderings we made sure we could find the Alphutte.  It was a long way diagonally the other side of town but we found it on the second road we tried.  Having approached it from a completely different angle we were quite proud of ourselves.  I hadn’t brought the map with me as we hadn’t planned this walk before leaving the hotel.  The restaurant was open so we went in and booked a table for later and then went back to the Rockford.

We’d got quite hot so, coming back to our palatial suite, we decided to have a spa.  It would be our only chance as we had to check out at 10 the next morning anyway.  We hoped the bubble rate on this one would be better than in our last room as that one had barely disturbed the top of the water!  We have to admit it was not a lot better but it was nice to cool down anyway.  Then it was time to get ready for dinner.  We walked the distance again to the restaurant and were seated further in than we had been the last time.

I hope they don’t mind but I’ve ‘borrowed’ this photo from their website.  But I have only praise for the place so hopefully that makes it alright. 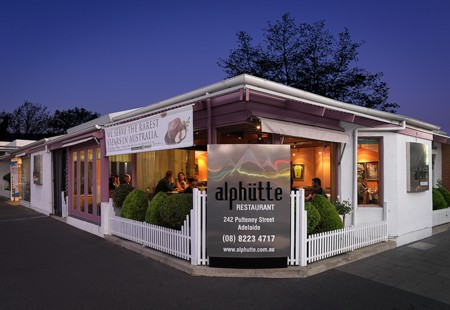 As you sit down they bring you out absolutely massive slices of bread with butter.  Truly, half a loaf would be a better description than a ‘slice’.  We decided to share one slice between us to leave room for dinner.  I chose a cauliflower soup which was totaly delicious and came in a tureen!  I had 2 bowls of it and still didn’t finish it for fear of wasting my main course.  David had garlic prawns.

David of course wanted his Moo Bru again and the waiter brought it out and started to pour the bottle into the glass.  I’ve never seen anything so frothy in my life!!!  The waiter was horrified and apologising all over the place and we both laughed and David said not to worry.  He still looked worried so we told him we wouldn’t tell anyone and now he laughed as well and left David to pour the rest in when there was space.

For mains I chose sweet and sour fish but I was expecting it to be like you would get from a Chinese restaurant and it wasn’t.  It was very tasty with large battered fish pieces – only 2 of them rather than the usual many small pieces – and the sauce was in a separate small bowl, quite runny and clear, not the thick red I was expecting.  Truly delicious though!  We had the lovely steamed veggies again, served by the waiter using a spoon and fork in one hand.  How do they do that???  And we also chose the potato rosti that we’d enjoyed there the last time.  David chose the same main course as before, Emmentaler Poulet.

David wanted another Moo Bru by now and this time it was brought out by the young waitress.  As she started to pour it she got a massive head on it and she was getting flustered.  We laughed.  I whispered to her “It’s OK, the other waiter did the same thing but we said we wouldn’t tell.  Sshhhh!”  She laughed and promised she wouldn’t admit I’d told her and, at David’s request, she left him with it.

By the time we’d eaten half of our main course we were pretty full and neither of us finished it all, but it was the last night of our holidays so we decided to have dessert as well.  I chose the profiteroles I’d had last time, they were too delicious to choose anything else.  David is sure he didn’t have a dessert.  I’m sure he did but can’t remember what.  Newsflash, a check of their online menu reminds us that he had crème brulee.  Our other meal at the Alphutte is at the bottom of this page

We were fascinated watching an Asian couple at the next table who ate more than we did.  The girl in particular was so slender and we wondered where on earth she’d put all that food!

We really did roll out of there but it was a memorable night.  We welcomed the fresh air and the exercise of walking back to the hotel again.  And we welcomed the huge, soft bed, despite it too having a hard, raised ridge down the middle where it was 2 singles pushed together.  I really don’t fathom that idea in a big hotel but who am I to question?

We slept well and woke later than we had been doing on the boat but it didn’t matter as we had nothing to do.  We decided to start with breakfast and went down to the buffet hoping the menu might have changed in the past week.  Nope.  Everything unchanged except that they now had blinds up at the window so we could sit anywhere without being roasted or blinded by the sun, and they had got new scatter cushions on some of the chairs.

Some mornings at breakfast we had noticed how many taxis were going by so, for entertainment, we decided we’d count them today.  We counted 33 taxis, 4 police vehicles, 1 fire truck with tender and 1 lost ambulance.  The ambulance had come from Morphett Street with its siren going, hesitated at the lights but turned left into Hindley and then stopped across the road from the hotel.  Then they sat there and got a road map out!!!  After a minute or two they continued the way they’d gone.  A few minutes later David saw them coming from the other direction on Morphett Street and crossed Hindley once more to go back the way they’d come.  That’s a worry!  A police car had shot through with its lights flashing as well, hopefully to escort the ambulance.

After breakfast we showered and put the last few things in the cases, checked out, but left our cases in their store room, and wandered around the city for the last time.  We took yet more pictures of public transport along the way and before we knew it it was time to come back to the hotel to catch a taxi to the airport.

I’m sure you don’t want to know about our trip to the airport or the flight so I am going to stop here.  Until the next holiday 🙂

Thank you for sharing our holiday with us!!!