Wednesday 17th Continued
Now we’re ready for things to improve, aren’t we? More than ready to have a truly good time? You betcha!!!

We told Mr A that we wished to go to Nicky’s Handlebar in Patong and he looked very worried indeed. I showed him the address written down, but of course it was the English names for the streets and didn’t seem to mean anything to him. But we set off anyway, and after we’d driven almost the entire way along the Patong coast road he pulled over and high-fived a guy standing there and then had a few words. The guy then came to us and asked where we wanted to go. I said Nicky’s Handlebar and showed him the address on Rat-U-Tit Road (yes, truly!!!). He thought for a moment and then the 100 watt came on over his head and he said “Oh!!! Nicky Handlebar!” and directed Mr A on where to find it. Now that’s using your head isn’t it? Ask a local. Bravo Mr A!

He turned right, travelled a short distance, and we were there. There was no spot for the tuk tuk to park so we hastily arranged for him to return at 3:30 to collect us. He looked a little worried and confirmed it thoroughly. We didn’t blame him, we hadn’t paid him a cent yet! (Or a Baht, if you wish to be pedantic.)

This restaurant had been recommended to me by a photographic friend and we were not disappointed – can you believe that? We loved it from the moment we first set eyes on it until long after we’d gone home, woo hoo!!!

The décor was so fun and interesting and we spent the entire meal making new discoveries on how thoroughly the motorbike theme permeated this place. Here’s the menu for a start. It couldn’t be lifted with one hand because it was a genuine, solid, heavy, motorbike wheel rim, and even had 2 pistons on either side of the base. The drinks menu was on a brake disk, and was also quite heavy. As menus go LOL 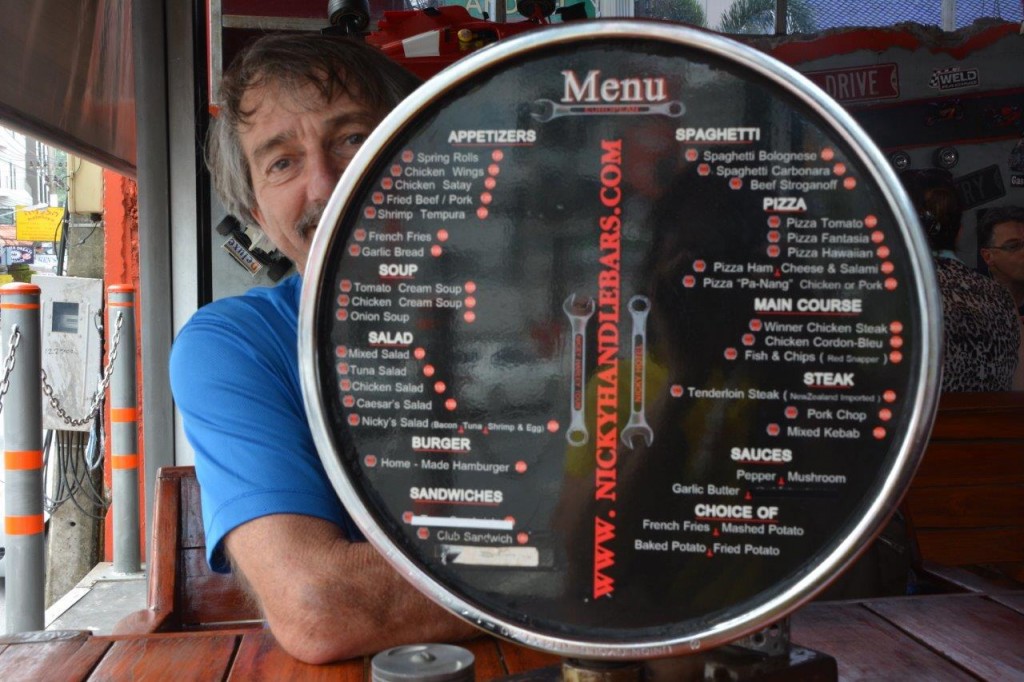 David ordered a beer and a prawn dish with pineapple rice and I ordered fish and chips and a pina colada. Check out my drink, it was so pretty with a heart-shaped slice of pineapple and a fresh orchid flower as well as a fancy swizzle stick! Oh, and David’s beer arrived in a stubbie holder advertising a bike shop in Midland, which is a suburb around 40 minutes’ drive from where we live. We showed it to the waitress, but while her ‘menu English’ was faultless, this was beyond her. I respect people with more than one language so much, and her English was 1000% better than my Thai! 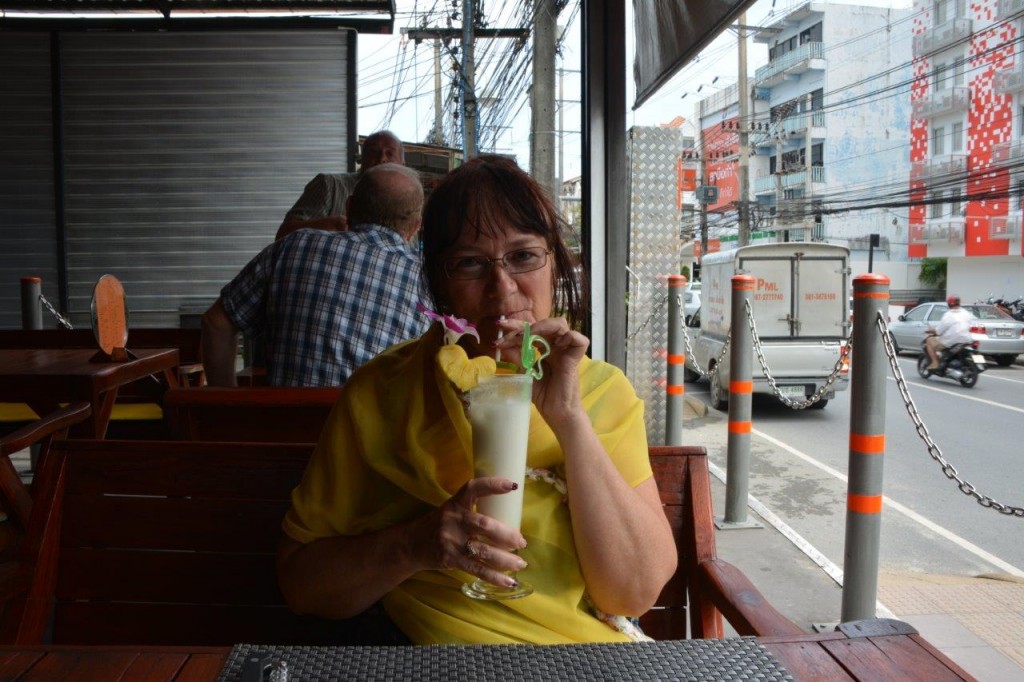 While we waited for our food we began to look more thoroughly at our surroundings. I’m trying to not load you up with about 20 photos, which I could easily do LOL 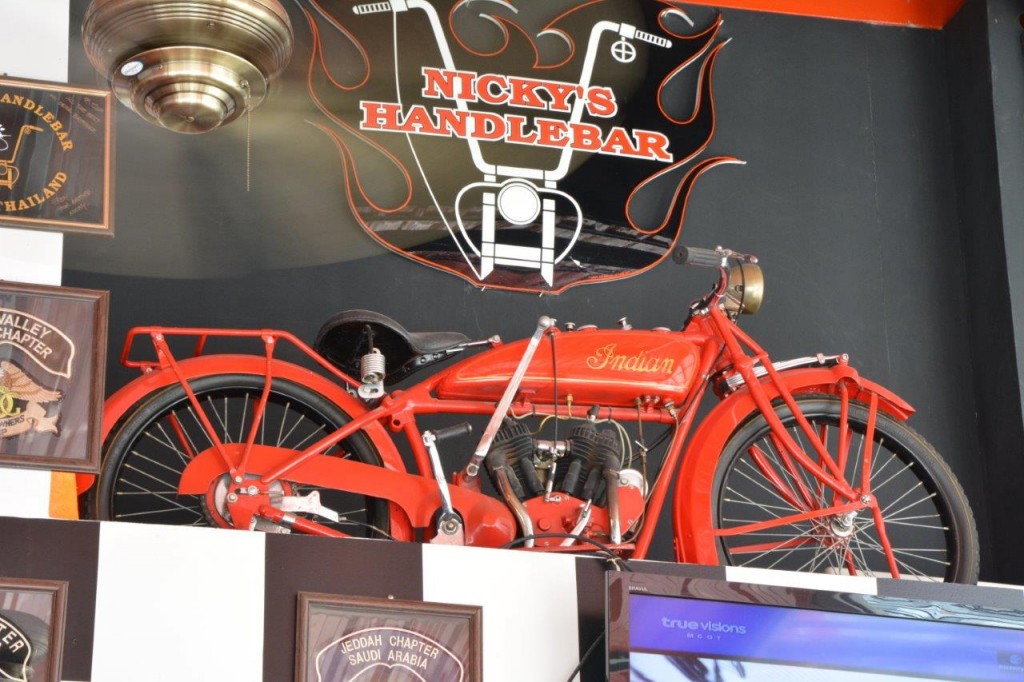 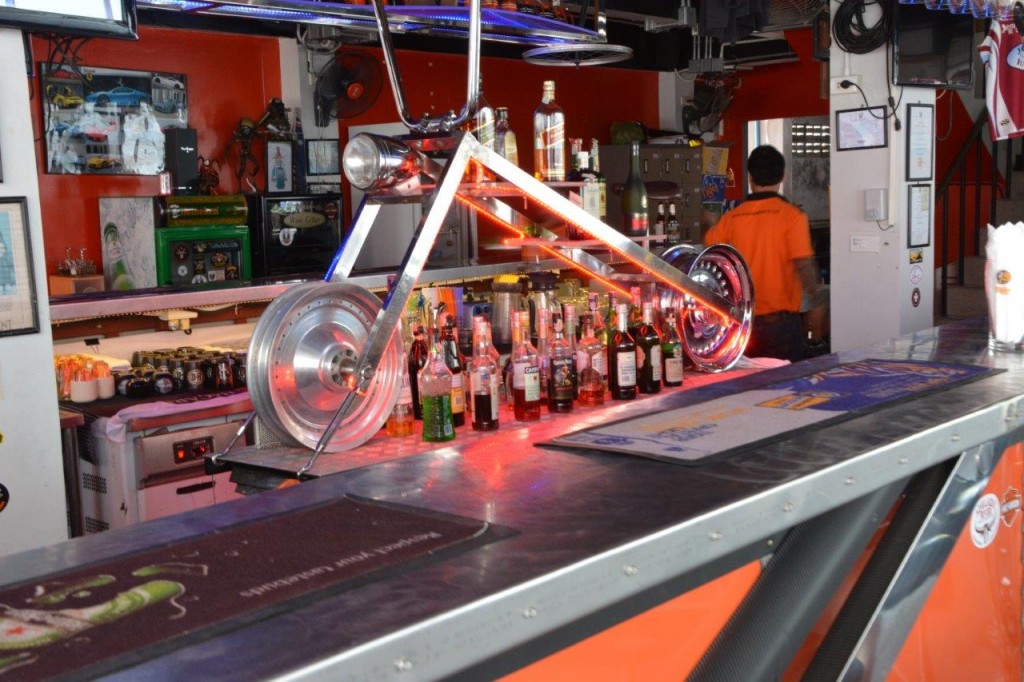 And then the meals arrived. Look at this!!! 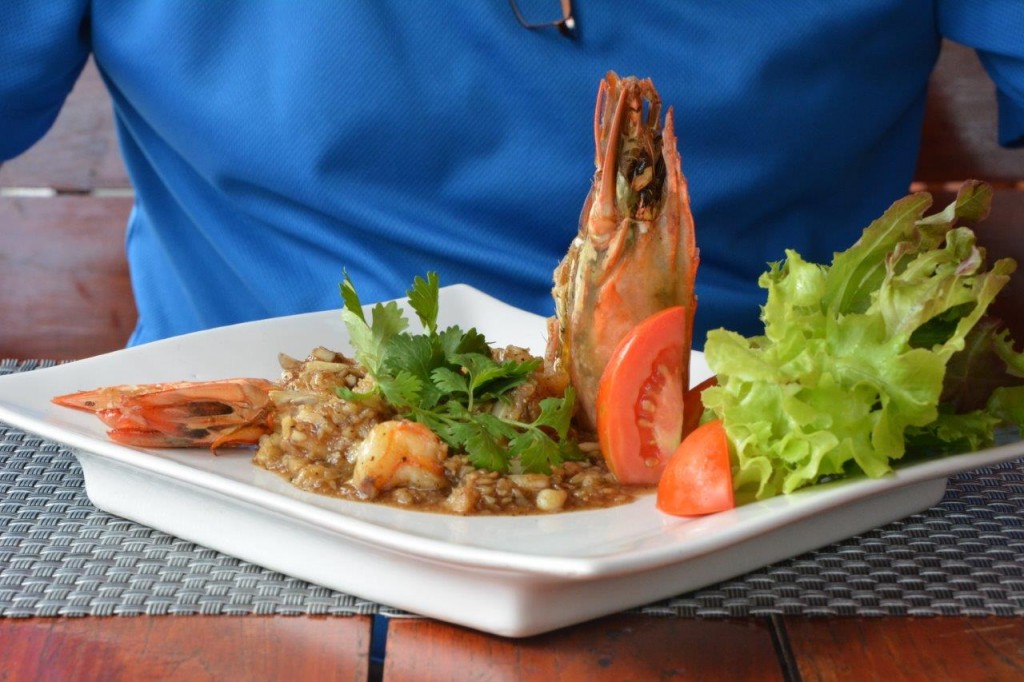 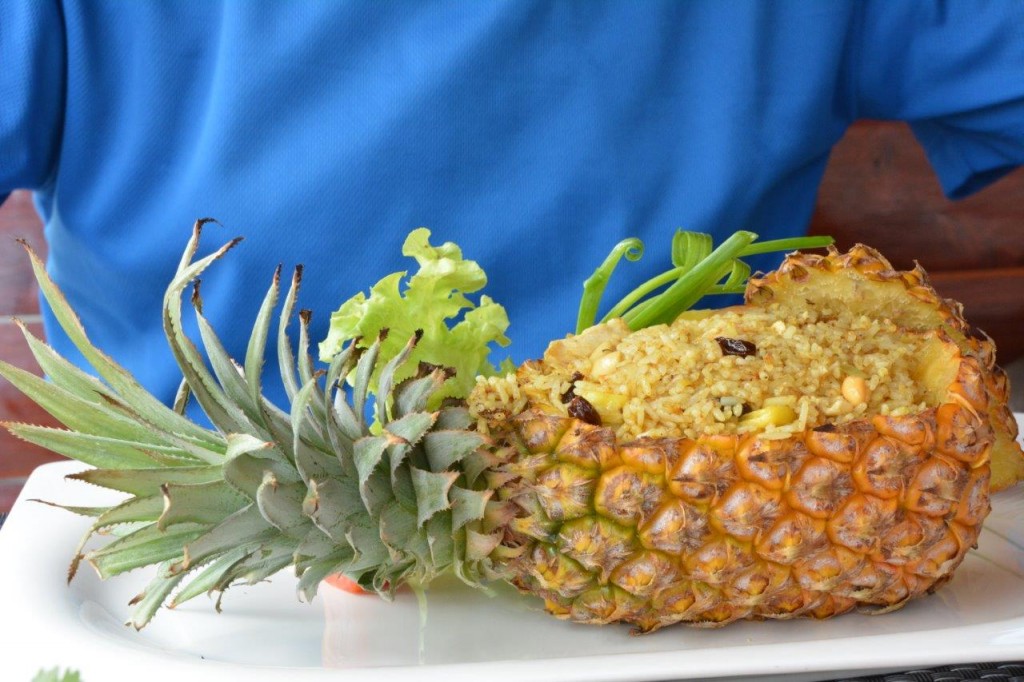 David took a taste of his rice and his face glowed. He held over a fork-full for me to taste, and my face glowed with joy as well. I think I said “No way!” or something like that. It was the most delicious thing I’ve ever tasted in my entire life. I would choose this over mangos, fudge or garlic bread – honestly! And my fish and chips were really nice too. The chips could hold themselves perpendicular – that’s my first requirement for a chip (tee hee!). The second is that they have at least some crunch, and these did. Beautiful.

We were just so pleased that we’d asked Mr A to allow us 90 minutes here. We savoured our meal and drinks at our leisure and watched the world go by. As I type that, I realise that part of the trouble with Bang Tao was that we were at the end of the earth and there was no ‘world to go by’.

Anyway, back to the topic, I’m going to give you a wordless introduction to a very small part of Nicky’s décor. But yes, the bird is real. 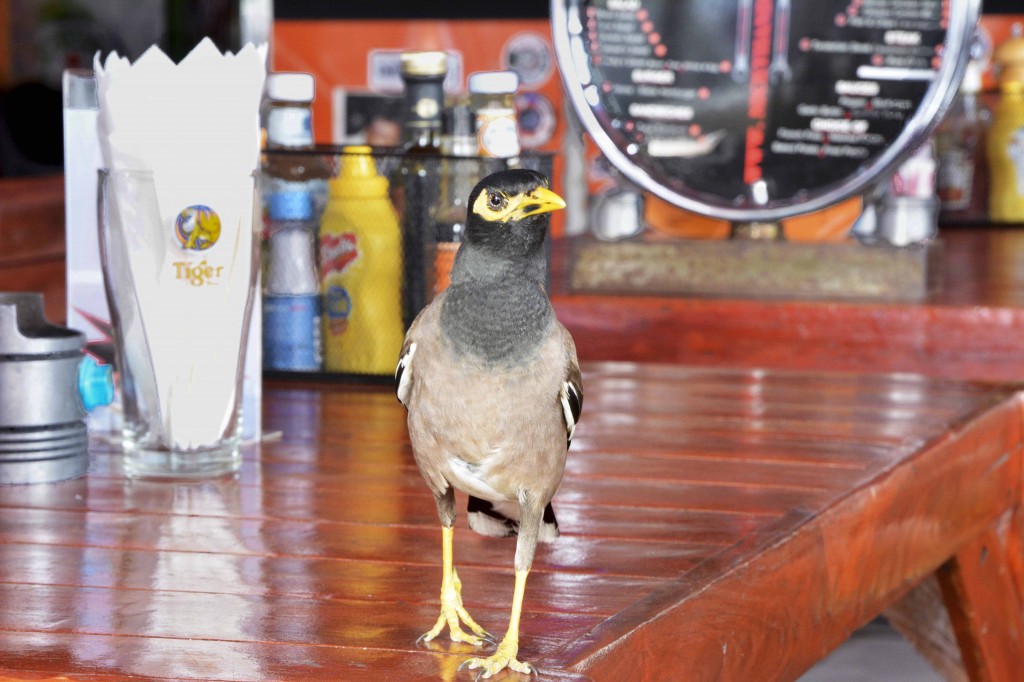 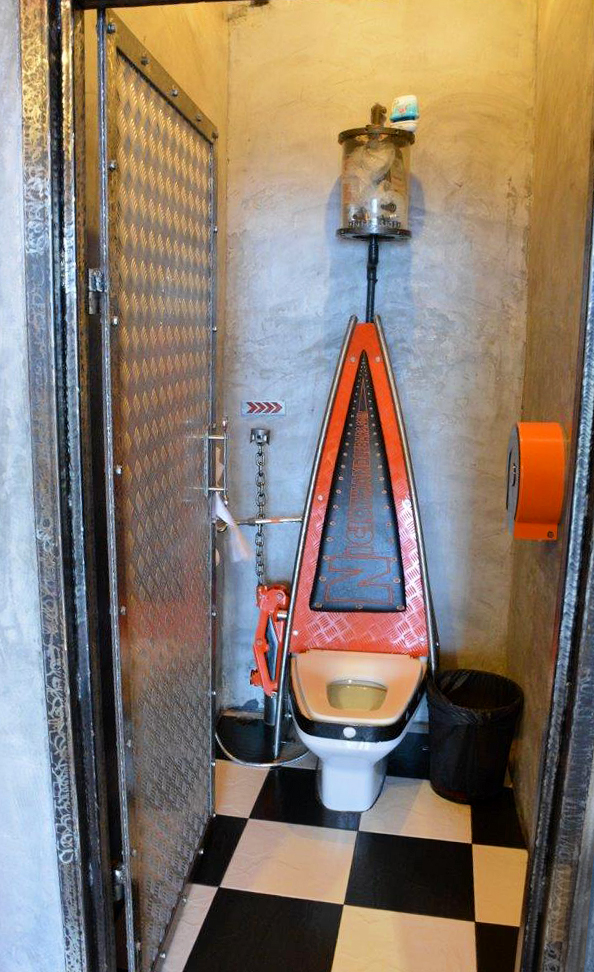 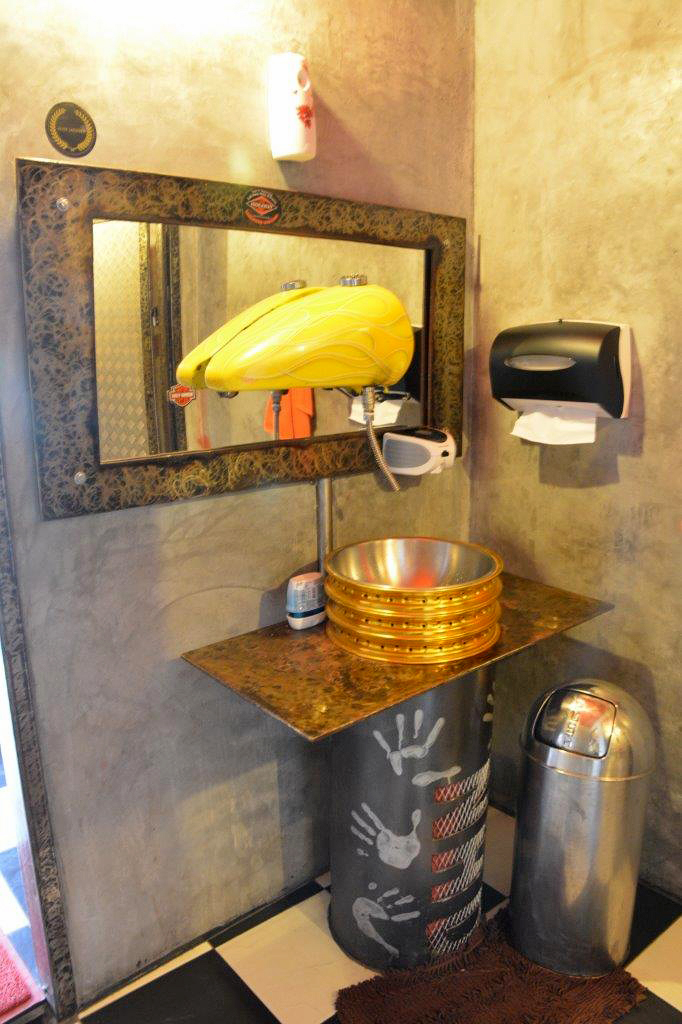 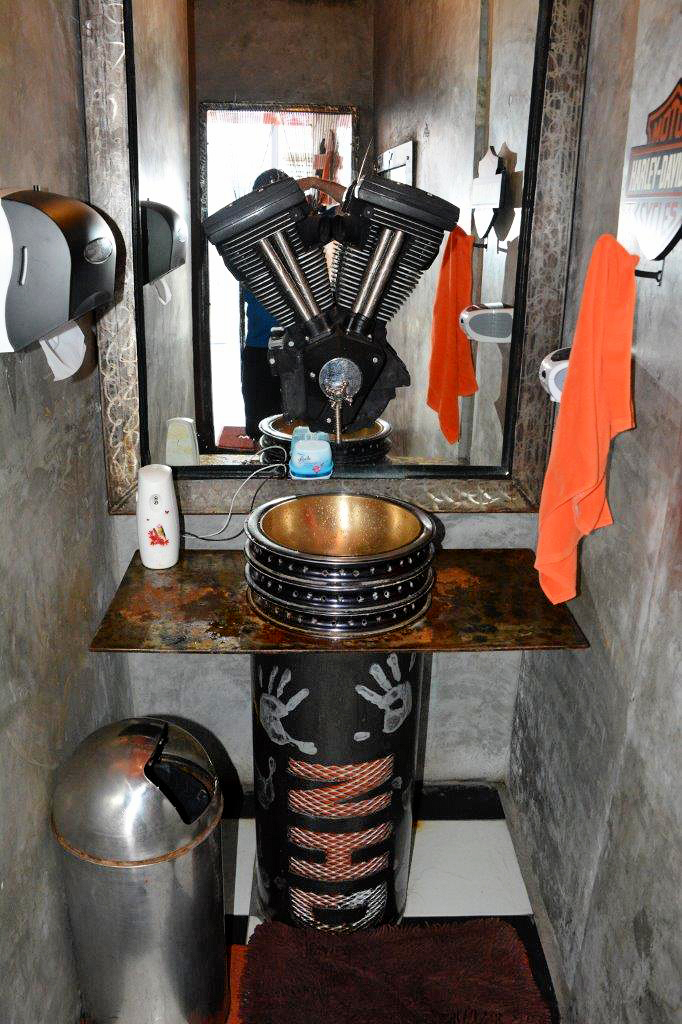 I love the ‘taps’ in the bathrooms. The ladies have water coming from a fuel tank and the guys from an engine. The basins were modified wheel rims. It was all so inventive.

We still had some time so decided to have a coffee. I ordered a cappuccino and David ordered his long black. We’re accustomed to that meaning a large cup, or better still a mug full. David’s face says it all at what arrived. Even that tiny thimble wasn’t full. Mind you, it apparently packed a whallop.

We had almost finished our cuppas and I noticed A118 parked across the road. Mr A must have been fairly relieved to see us still there I think. He was 15 minutes early but we finished our last few sips and took a hasty photo of the ATM over the road. All of the ATMs we saw were reached by a couple of really high steps. I guess it stops anyone seeing your PIN over your shoulder. Other than that I can’t think of a reason for the steps. I’ve also never seen such plentiful supply of ATMs, they were every few metres along any populated road. 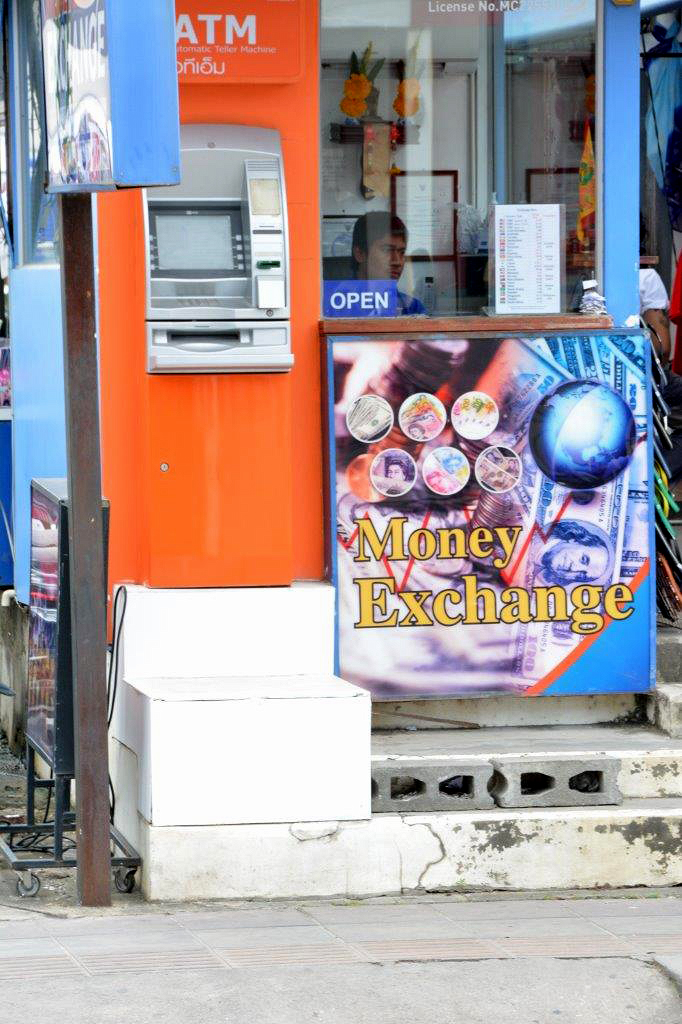 For the journey home we asked Mr A if he could stop at some high places so that we could take photos of views over beaches. A couple of times he stopped *at* beaches, but soon understood our gestures and the word ‘high’ and we set off again. We passed by some beautiful views but it was certainly not his fault – there just was not any place to pull over. But he did manage to find 2 spots for us to look out from, and he even took a photo of us at one of them.

And then he delivered us back to our resort and we met up with Sheryl and Jon in the wonderfully cooling pool, enjoying drinks and a chat together. We were quite firm friends by now and they were certainly a wonderful couple to speak with – fun and interesting with a good sense of humour. Needless to say, this included a bit of banter with us each running down the others country, and the residents thereof in general. But that’s just what Australians and ‘Kiwis’ do! We arranged to meet at 7pm for dinner at Nok & Jo’s.

Back in our room, we noticed that we had been given the great honour of receiving a tea-towel. No way!?!?!? It had only taken 4 days LOL  It was as stiff as cardboard, about 6″ x 9″ and stained, but hey, it was something to dry the dishes with!  And a peacock feather, that David had found on top of the kitchen cupboard and was looking forward to photographing, had gone missing. I checked my James-Bond-approved suitcase and found that it had not been interfered with. My umbrella was still safely back inside it too.

We showered while plotting imaginary revenge on the cleaning staff. The bathroom was sunken by 2” from the rooms around it and we planned on filling it to the brim with water, floating little paper boats with sails that said “Don’t move things that are not yours!”, “Don’t steal our stuff!’ and laughing like crazy. As usual, the more I laugh at David, the more ridiculous he gets, and I was doubled over with laughing at his steady stream of wicked, but never-to-be-carried-out ideas.

The meal at Nok and Jo’s was not bad. There were only about 4 tables with anyone seated at them and I would have chosen fish and chips except I’d had that for lunch. So I went with a marinated fish. It had skin on it and yes, I’m very fussy, so I was trying to eat only the actual flesh, which meant scraping the most flavoursome part, the crust, away. I ordered a cocktail which was nice. The best part was most certainly the company of our friends!

As we chatted about a million things I mentioned the earthquake in the night, yet what happened next was a terrible shock. Jon said he had felt one as well. He’d felt it around 6am. I never ever dreamed that I had been right. And then the conversation turned to tsunamis and, whether because I was so tired, my stomach did a 360 and I think the colour drained from my face. That had been the last thought in my head. Yes, even me, the great worrier LOL

It had been a very pleasant evening even so, and we walked back together by the light of my torch and said goodnight by the pool.

Perhaps this will come as no surprise, but I was again awake half the night, because the thought of waking to an earthquake was far more terrifying than one happening while I was already awake! There wasn’t one, of course, and I eventually did fall asleep and ‘slept in’ somewhat. I have a pet hate of people saying I’ve ‘slept in’ when I’ve only had about 3, or even 5, hours’ sleep, but there you go.

Next page/… Please feel free to leave a comment in the fields below before leaving this page. Email addresses will not be used in any way, nor displayed for anyone to see. All comments are hidden until approved by me and spam will not be approved