Once we’d eaten and rested we found the loos which were a lot more enjoyable to associate with and, as I’ve already said, went out of the back door of the hotel courtyard onto a busy road full of ‘citiness’.  Not much further along was the Raffles Shopping Centre – ahh, I see.  I’d expected it to be a closer part of the hotel – and we went in for a look.  You guessed it – all the brand names yet again.  It was a very big centre, spacious and light and we just looked at a couple of floors including a close look at the Rolex shop window.  $40,000 was the average price for the men’s watches.  Yes, just one for that price!

From here we just headed along North Bridge Road towards our hotel.  The streets were very busy, the footpath was wide but still full of people intent on trammelling us underfoot and there were many, many army folk who looked as if they were about to set up roadblocks.  We found out later that there was going to be something the next day that the prime minister was to attend.

We found the now very familiar river and walked along the side of it back to the hotel and decided to have a swim.  We usually swim about once a year so you can tell how appealing this weather and this pool were to us.  There was still no sun but the temperature was beautiful so it didn’t matter a bit!

We decided to walk and see if we could find the Clarke Quay MRT station ready for tomorrow and that we would look at Central Square along the way, which we thought was a shopping centre.  Ha har.  Suffice to say that we walked too far in one direction and then came back only to realise that we’d already explored down this street on our Chinatown day duh!  Anyway, we got to look at a heap more shops further around including an absolutely *massive* food hall that covered a full floor of a large shopping centre.  It seemed very popular with the Chinese people and sold meaty things that we are not accustomed to and then it took us quite a while to find our way back out.  We’d entered via a 2-storey escalator on the outside of the building and there was not a corresponding ‘down’.

We did find the MRT station, along with a sign that said ‘5 storeys to MRT concourse’ and it turned out that it was 90 steps and no escalator.  But that’s tomorrow’s story.

It was not really dinner time but it was also pointless going back to the hotel so we went up and down the aisles at Clarke Quay trying to decide where to eat when it was time.  In the end I suggested that we go into Malone’s Irish Pub for a drink to fill in some time, and that’s what we did.  They were listening to some Australian cricket on a massive TV screen at volume three thousand, four hundred and sixty five.  Man!!!  And it was well outdated cricket at that.  The little Asian girl that came out to serve us couldn’t understand a word David said and he couldn’t hear a word she said and in the end she managed to make a hasty retreat.  A few minutes later an amused guy came to see to us, surreptitiously watched by the Asian lass from behind the door post.  She and I both wore smiles as David managed to order a Guinness for himself and a Sing Sling and a glass of water for me.  The 2 alcoholic drinks arrived quickly and I drank mine before David had got half way through his.  I’d forgotten to ask for no ice and hate drinks that have become watered down as it melts!  He was stunned!  I am not a drinker.  My glass of water arrived just as David was finishing his beer.

Now I’m sorry that today’s story seems to have spent half of its time in the toilets but here comes another one.  Just be thankful I didn’t take photos to share 🙂  After enquiring as to their whereabouts we were directed to the back of the pub.  Men left, women right.  I went through the door to be met by a brick wall and an arrow pointing left which I followed along a long, narrow corridor which then veered right and continued another decent distance.  Then left to a crossroads, and finally there was a half-glass door (the other half was wood, not missing) in front of me and inside was a nice clean and spacious room.  However, the cubicle doors were misted glass and you could clearly see outlines through them.  Maybe I’m obsessive about my privacy or something!?!? but I found this rather ‘off’ as well.  It was still an improvement on the black shiny tiles of our first day though – I’ll have nightmares about that one!!!  Luckily, I’d left a trail of the ice cubes I hadn’t wanted from my drink and managed to find my way back to David.  OK, I lie, I was very clever without ice cubes and found my way back unassisted hehehe.  David said “Where have you been?” and I said “Back to the loos at the Raffles!”  It turns out that his had been straight through his first door.

We decided to eat at Shiraz Persian restaurant where we’d partially seen and fully heard (they had to battle the pub noise and did so well) a belly dancer from the Balinese restaurant next door on Tuesday.  We chose ourselves a nice table indoors, saying to the waiter that we wanted to be away from the smoke outdoors.  I understood the odd look he gave when, a bit later, I noticed that they’d opened up part of the glass wall to stick their speakers outside and there was a 2 foot gap where smoke could come straight in to us.  We just prayed we were early enough to eat our food before anyone sat outside and started up!

David ordered a prawn something kebab with rice for himself and a vegetable kebab for me.  Neither kebab had a stick but the items were lined up along the plate as if they had and it actually looked really cute.  My veggies were all deep fried and rather oily for what I’m accustomed to – there was cucumber, celery, capsicum, 2 fig-like things, 2 small potatoes and a block of cottage cheese.  David had a shiraz to drink which he said was very nice and I had a virgin colada.  The belly dancer was excellent with very good skills and her (we think) hubby, the drummer, was quite the character!  Here’s the photo David took after asking the guy to pose.

I’ll put a pic of the dancer in a minute.  I’ve failed in my mission to have story and pic together – oh well!

A lot of the people outside were smoking bongs (for want of a description, and perhaps this is where they started – Persia, not in a Singaporean restaurant) which the waiters were filling with something and adding hot coals.  They actually smelled very pleasant indeed which was a huge relief, and were obviously legal.

After the meal we went to the ATM to get some money and were shocked when it showed David’s full name on the screen in living colour with the word ‘welcome’ under his name. 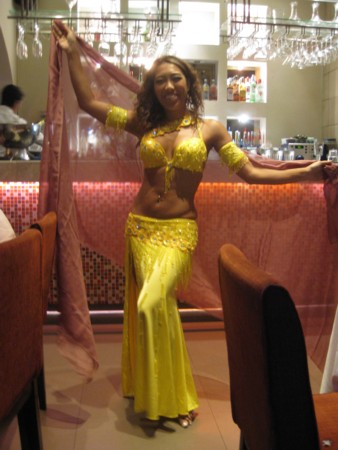 From there we finally bought the graphic equaliser t.shirt for Nat – yaayyy.  Unlike the beer that went up in price during an hour at the night safari, the t.shirt had come down $4.

This time we walked home trying to hug one side of the path with David on the ‘outside edge’ and found people moved around us a little better rather than barging through the way they did when it was ‘the woman’ on the outside.  Yet again, men have an advantage, and people perceive even my gentle little David who wouldn’t say boo to a goose as a bigger threat than me.  How wrong they are LOL

When we became pushed to the middle of the path despite our best attempts I discovered another trick.  If we pretended to be deep in conversation and looking at one another rather than the people coming towards us they could see that we were oblivious to them and they had no choice but to be the ones taking the evasive action.  Bliss!!!

SUNDAY 18th July
The breakfast room was a lot quieter today and even had spare tables the whole time we were there.  We had a German couple sit next to us but they spoke really quietly, and on my deaf ear so I understood very little as I could barely hear them.  Bother!  I love listening to German accents and words.  I heard her say she was unwell and that was it.  Funnily, it didn’t bother me that they didn’t want to speak to us, because I was enthralled with listening to them.  Our Asian lady table-mates the other morning would have had the same appeal had they spoken amongst themselves as I’m entranced listening to any foreign language, but it was just an uncomfortable silence with them.

We decided to go to the Jurong Bird Park today as it was the 3rd park we’d paid for, along with the zoo and night safari combo ticket so off we went to catch the train at Clarke Quay. This was the decent of 90 steps before 2 flights of escalators to reach the train and we then had to transfer at Outram Station for the train to Boon Lay.  The train, as always, was busy but we managed to score a seat when someone got off which was a great relief.  My balance is not good because of the damage to my left ear so I dread having to stand on a moving vehicle even though David is always my hero and dutifully holds me tight and safe.  There are other risks involved in him having his arms around me but we won’t go into those 😉

The train emerged from the tunnels yet again at a height of about 2 storeys and travelled sometimes higher than that as well.  We were heading in a different direction than we’d gone before and were yet again amazed by the housing – high blocks of flats one after another as far as the eye could see.