I sat in the centre seat again, but this time we had someone next to us.  Oh no!

Perhaps because of the 2nd dose of tablets, the next flight went fairly well.  I still couldn’t lean over to look out of the window but, as long as I stayed sitting bolt upright, felt pretty good.  This time I did accept my meal from the hostess, but there was no chocolate bar!  I gave David my curry and swiped his bread roll, butter, cheese and biscuits and wrapped them up together with mine and my chocolate cake in its little container so that I could at least eat after we landed.  I said to David that I would be pretty hungry later after only having 2 bits of toast all day and with it being well past dinner time when we land again.  [7.30 Perth time.]  The lady next to me must have felt sorry for me too and very kindly gave me her cheese and biscuits as well.

David thoroughly enjoyed the landing in Darwin.  He kept saying how fantastic it was seeing the lights start to appear from the darkness that we had been flying over, and how everything was getting bigger.  He was really excited by it all and gave me a lovely running commentary.  And so we touched down, thanked the hostesses who really had been so attentive to us on our first ever flight, found our luggage, went to the loos on stable ground, and set off to find our transfer bus.

This was soon located, complete with a really friendly young driver who had the local radio station blaring.  He and the bus/hire car/taxi booking clerk inside the airport had a bet going as to whether the bus would have 3 or 6 passengers.  Both wrong!  There were more like 16 of us.  David turned his mobile phone back on and we sent a message to the boys that we had landed safely and tell them that it was 8.30pm Northern Territory time.  Our first time-change trip since David was 11 and I was 15, so even that was exciting.  Nathan then rang us and we had a bit of a chat/yell over the sound of the radio.  Then off we went in the bus all over the place, dropping people off at hotels, motels and back-packer hostels.  It was freezing in the bus because he had the air con on so cold, but beautifully warm and balmy outside.

Even in the semi-dark we were struck by the number and variety of palms and huge frangipanis everywhere.  Everything just felt different and new somehow.  We enjoyed looking at all the other hotel foyers while people got off the bus, and eventually it was our turn.  Complete with our scruffy, comfortable travelling clothes, we got out of the bus and had our bags quickly taken by a guy with a posh trolley, and checked in to our 5 star hotel. We were given a glass of champagne each but it didn’t make us look any more dazzling!  They didn’t even hurry us along before we brought down the quality of the place! 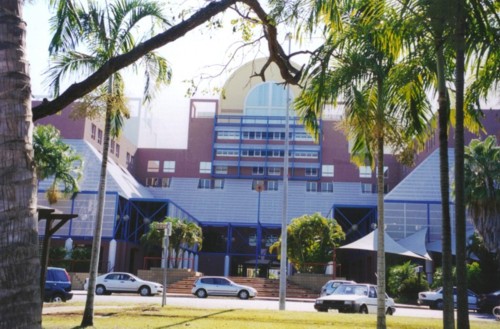 The foyer was impressive with a very large void going all the way up to the 5th floor.  On the 3rd floor, around 3 sides of the void, were pots with variegated ivy which hung all the way down to ceiling height in the foyer.  When on the 2nd floor it made a kind of curtain from floor to rail which you could look through to see below.  I suppose when they grow longer, they’ll move the pots up to the 4th floor.

So, here we are on page 3 of my story and only just arrived at the hotel.  Oh dear.  Might be time for a cuppa huh?

The porter then took the luggage trolley and showed us up to our room.  A hotel room is pretty well a hotel room, so not heaps to describe.  We had a nice little bathroom with a clear glass shower screen [ooh, very honeymoon!], a bar stocked with very expensive things such as $7 tiny bottles of spirits with $3 ½ sized cans of coke to go with them.  Even the tiny packets of peanuts and mars bar sized chocy bars were $3 each.  We viewed but didn’t touch!  There was a kettle with milk, tea and coffee, and a toaster.

I sat on the edge of the bed and ate my strange take-away-airline meal while finishing my champagne.  David looked a little disappointed, I don’t usually finish an alcoholic drink, so I think he was waiting hopefully in the wings.  We unpacked our things and got settled in to find that it was 10 o’clock already.  David had set his watch to NT time and I left mine on WA time for the whole holiday so that we knew what time it was for the boys.  It seemed silly to stay in the room and go to bed so soon after arriving, but also little point going out in the dark when we didn’t know our way around, so David messed around with the TV and radio for a little while, and then we settled for bed.

Sunday was one of our two ‘free’ days [as in no day-tour booked], and we woke around 6 o’clock, showered, and descended on the buffet for breakfast.  We had a leisurely breakfast with coffee, bacon, eggs, tomatoes, a variety of fruit juices and Danish pastries.  There were cereals, yogurt and toast but who needs them when there’s a buffet?  The waiter kept bringing coffee and David kept saying yes please!  In the end the waiter stopped asking and just refilled David’s cup every time he passed by.

Then we went for a walk into the city centre which took about 15 mins even at the slow pace that we chose.  We spent most of this time with our heads bent backwards looking up trees because the trees, flowers and birds were all different and worth looking at – or listening to – as the case may be.  We found a supermarket that was open and bought some bread, butter, orange juice, spring water and chocolate for breakfasts and snacks, and took it back to the hotel room.

Next, we wanted to visit the Botanical Gardens, so set off on foot with a rather vague map in hand.  This only showed main roads, and not all of them were named, but we love exploring so it didn’t matter.  We didn’t stare up quite so many trees on this journey.  It was now quite warm and we were glad of the bottled water in David’s back-pack along the way.  As we approached the gardens we passed a golf course and there began to be cars parked on the sides of the road.  The cars were getting more and more numerous and we presumed that there must be a golf tournament on.  Then we arrived at the beginning of the Gardens to find a market in full swing.  We had a good time walking around the stalls to see what there was to see.  I bought a really yummy, cooling, mango drink.  I think it was just made with mangos and crushed ice, but really hit the spot.  Unfortunately we were too early for mangoes-to-eat season.  Shame, ‘cos I love them.

One really cute thing there is a little hard to describe.  It was much like a carousel ride.  It had a centre pole and a roof like a roundabout with poles coming down where the horses would go, but this one had no floor because the horses were real.  The ponies were tied to the poles so that when the lady had put the children on the ponies, she just led the one with the smallest child and they all walked around.  It was so cute.  I want one! 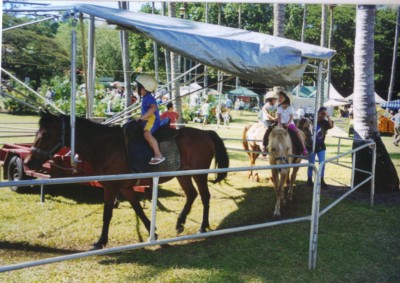