As we continued along tent city we couldn’t pass a single one of them without being accosted. At least now we could say we’d just eaten! But even this didn’t work fully… “Well what about dessert?” “What about drinks?” “What about tomorrow? Here’s my card and I’ll give you 30% off and your first drink free tomorrow!” and on it went past Chinese, Indian, Thai, and a million other options, all with their insistent hawkers out the front. I can’t tell you how relieved we were to come out the other end. I’d guess there were about 30 restaurants in that short, but difficult to traverse, strip and we vowed never to step foot in it again.

We walked further to the last bridge, almost back to the Merlion, and then back on the main Clarke Quay side of the river, stopping to watch 2 pairs of people use the sling shot ride.

There was a cart-sized Haagen Dazs stall next to the steps up to the bridge and, as with the others of this brand we’d seen around, the staff members all wear nose and mouth masks so David said “That stuff must be really toxic!” He lives in an alternate world to the one I inhabit and always makes me laugh.

On our way back through Clarke Quay’s main eating area David saw some young folk seated in wheelchairs around a restaurant table and, as we’d been asked to check out wheelchair access in the city for a friend, he asked one of the guys how he was finding mobility. The guy said they pretty much didn’t let them out of this area – which we were shocked by! Though truly, we’d already noticed that access wasn’t good, there are steps everywhere! As we were walking away we realised that the wheelchairs were actually the restaurant seats!!! We saw later that the restaurant was called ‘The Clinic’ and had those hospital curtains that can be wheeled around and a huge operating theatre light and went downhill in bad taste from there. But we did laugh about poor David’s well-intentioned question – as I’m sure the young folk would have done too. They’d kept very straight faces while answering!

We saw one stall selling t.shirts that light up and one was a fully-functional (well, the lights anyway) graphic equaliser that responded to sound so we knew that we just had to buy one for Nat. We left it a few days before buying but I may as well get the mention of it over with here.

We then walked back to the hotel making approx 15 kms walked for the day.  You can see our route by the yellow line with the red dots on the aerial view below. 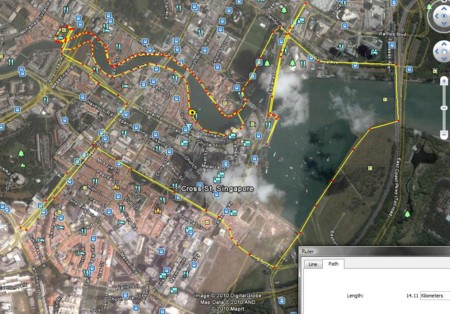 FRIDAY 16th July
Slept 11pm until 8am very solidly in our lovely new room and obviously much more comfortably in a double bed.

After breakfast we showered and dawdled in the room for a while before heading to the gym. I only went on the treadmill but jogged for 30 minutes. David went on the stepper until the treadmill next to me was free and, as we jogged together looking out of the window, we watched the rain set in.

We showered again and then asked the valets how to get to the zoo. They also offered to lend us an umbrella which was really kind and we said ‘yes please’ as it was raining quite heavily, and set off to walk to Orchard Road’s underpass which was also the entrance to Dhoby Gaut MRT station. Figuring out how to buy a ticket was beyond us I’m afraid and we eventually managed to find a man, hidden away in a remote corner, who shared our amusement at ourselves and told us how to buy tickets and where to catch the train. Here’s the ticket-buying machine… 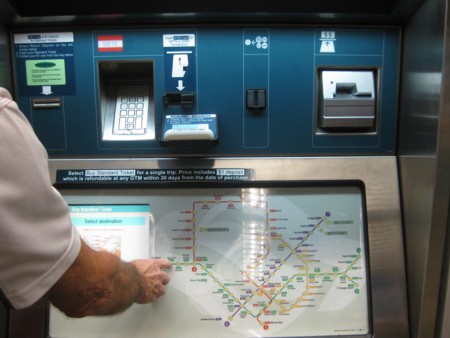 We’d already gone down some steps and a set of escalators to get to the ‘know it all’ as David calls information counter staff. Now we’d bought our tickets we had to go up another set of escalators, across a travelator on the flat, down an escalator, turn left and then down another escalator before finding the glass wall that edged the platform. I liked this idea as it meant nobody could be pushed onto the rails in a crush and it seemed very safe. 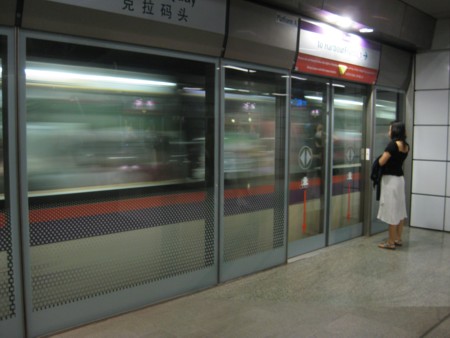 Train arriving at the MRT Station

As the train travelled along there was a map of stations above the doors, as there are here in Perth, but this display lit up so you could always see which was the next stop, which seemed very sensible. There was also a light on either one of ‘door opens this side’ or ‘doors open other side’ which was also very useful. The signs saying not to lean on the doors were in 4 languages and the audio announcements were mostly in English but for some stations they were also announced in Chinese. Why this didn’t happen for every station we still don’t know.

For each of our train journeys we were surprised that as soon as we came out of the tunnels onto the surface we were always immediately well above road level. Surely not all the tunnels began or ended in the side of a hill? And there were not many hills – most of these had been flattened so that the soil could be used for land reclamation, such as the land under the Bay Sands Resort!

At times we were probably equivalent to 3 floors up in the air and we marvelled at the sheer number of apartment blocks all along our route, realising why so few people owned their own cars – there was nowhere to park them that we could see! There were very few parking spots near any of the apartments and certainly not a floor of parking lots in the buildings themselves. At one point back in the city, but while I think of it, we saw a couple of small trucks waiting in a line and David noticed that they were waiting for a vehicle lift to take them up into a car park. We were most surprised!

But back to the subject at hand, our train stop, Ang Mo Kio, arrived (or more truthfully, we arrived at it!) and we had to now go and find our bus. First, we had to go to the ticket machine again and put our tickets in to get the $1 refund. The tickets were strong plastic like credit cards and they charged you a $1 deposit on top of the fare to make sure you returned them!

We again found a ‘know it all’ and asked about the buses and were told we had to pay by exact fare so David got some change from the man along with the price of our fare for the journey and we queued up in the corrals waiting for the bus to arrive. Yet again, the bus was behind a closed glass wall and the doors did not open until the bus was parked safely.

It was quite a long journey on the bus and I kept wondering if we’d passed the zoo and not known, but the zoo was the final destination and there was no doubt once we were there. It seemed, as we travelled along, that all the roads in Ang Mo Kio were called Ang Mo Kio 2 or Ang Mo Kio 6 and I think that the roads in one direction were even numbers and the cross streets were odd numbers. Interesting!

At last we were at the zoo and decided to have a lunch before going in. There were only snack foods available and we decided on pizza, which was sold by the slice.

I probably won’t say heaps about the zoo but our general impression was of beautifully lush enclosures, minus fencing in most cases, and it was amazing how 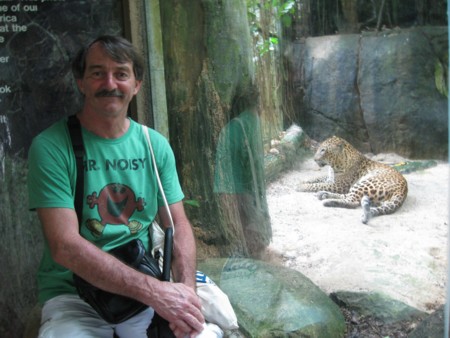 David and the Leopard at Singapore Zoo

close to the animals we were with no obstruction to our view. For the most part it looked to us as if we were just separated from the animals by hedges but behind the hedges were huge concrete pits that were too big for the animals to navigate. The conditions for each animal were excellent and as natural as possible. We were very impressed. 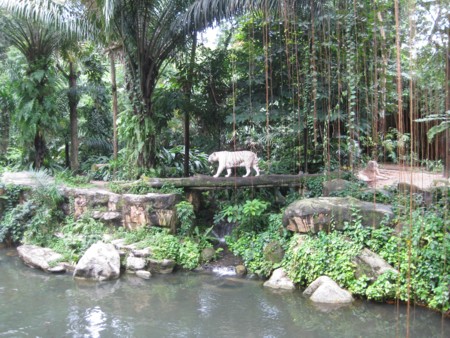 but also decided to see the elephant show while sitting and enjoying an ice cream. I’ll just put a few of the pictures I was most pleased with and let them speak for themselves.

Two white tigers, if you can make out the one on the right of the log bridge. And I loved the hangy-downy plant root things everywhere. We couldn’t figure out if this 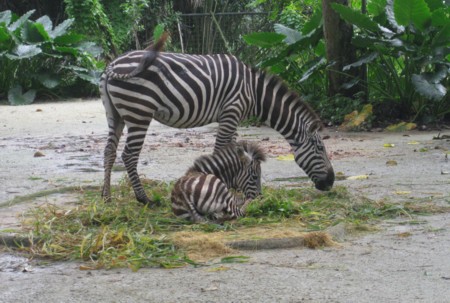 Zebra with Baby at Singapore Zoo

was a creeper, a tree, or a mistletoe kind of thing, but whatever they were they were beautifully tropical and exotic to me.

After all of this idling around we sat and had a hot drink as the zoo was closing to tide us over to 6pm. 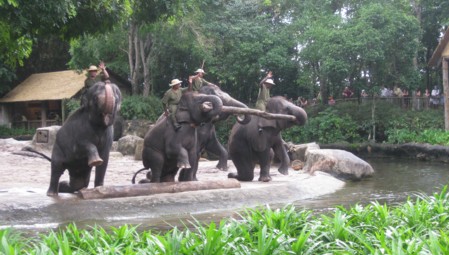 The zoo shut at 6pm and the night zoo opened at 7pm but fortunately the night zoo did open their ‘restaurants’ from 6pm so we were able to spend the hour slowly ordering, eating and drinking to fill in the time.