Wed 24th Nov
I’d set an alarm for 6.30 because we did want to have a breakfast before the 9.15 boat. Our next flight was to be a JetStar so there would be no food until we got to Brisbane, or on our 2.20 pm Qantas flight back to Perth (har har as it turned out!).

After breakfast we showered and threw the last oddments into our cases, placing them outside our door as instructed so they could be collected, and we went up to reception to hand back the keys, cards, etc. Now what? There’s a lost feeling to being roomless at the end of a holiday, but we’ve become familiar with it now and decided to play ping pong one more time. Fortunately, I’d put the ball into my cabin bag so we still had it with us. We managed to pass 20 minutes partly playing but interspersed by me having to chase the ball up the hallway. Every time I missed, the ball only had to travel about a foot beyond me and it was caught by the wind blowing in the doorway so I got additional exercise trying to stop it before it went into the bar. The bar was shut so there was to be no gain by failing to catch it!

We went to the jetty and were given boarding passes and had to confirm that our luggage was all present and correct. And the wind blew and there was some drizzle. We laughed at having to hand our boarding passes over 2 minutes after receiving them – not a lot of point was there?

We had a beautiful farewell from some of the G.O.s including Glenn who got a great big, well deserved hug from me. 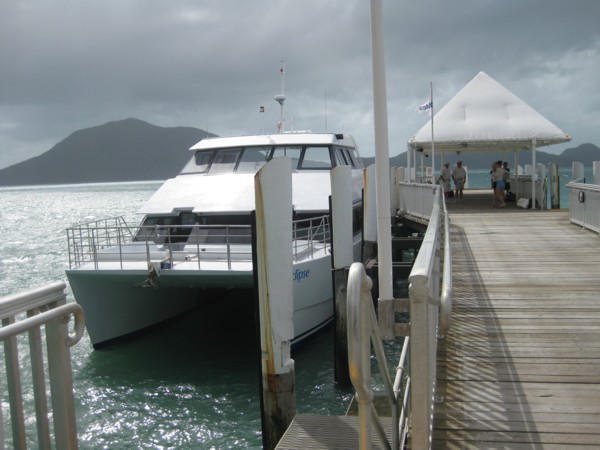 I was very grateful to have been dosed up for the boat journey, it really was quite rough and in fact I laid down on one of the benches for the first 5 minutes just to make sure I had my sea legs before I sat up. A girl across the other side of the boat looked rather green for quite some time but seemed to rally round after about 15 or 20 minutes.

Apparently we were travelling with the tide, or the swell, or some other nautical term so we arrived very soon after that at Hamilton Island. Yet again we were bundled into a bus and had no time to explore the shops. Such a shame. I just love to look. 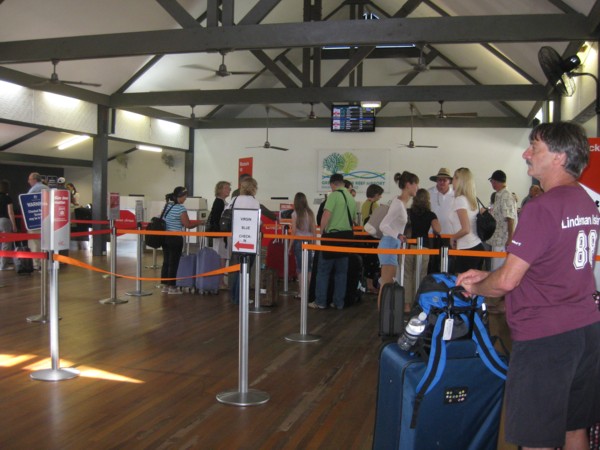 The tiny airport check-in area could all fit easily into one photograph – so cute! And the day’s flights all fitted very easily onto one screen; five in and five out. We were really surprised to see planes being fuelled on the tarmac. The fuel would have to come in by boat or plane to get to the island and it was only a short hop there, but I guess the Melbourne flight was quite a long distance and it would have been that plane that we saw being fuelled. 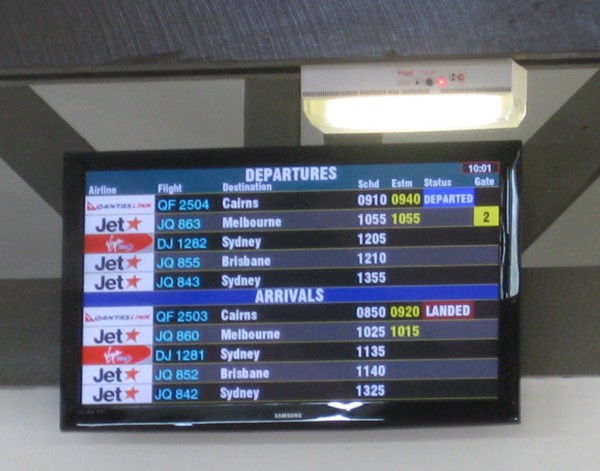 We were keen for our flight to be on time as we’d cut it fairly fine for transferring in Brisbane. We were to land at 13:35, had to collect and check our luggage back in by 14:05 and fly again at 14:50. It was only a matter of 200 metres between where our luggage would arrive and where we had to check in with Qantas so it was possible!

Anyway, still on Hamilton, the kind lady took our bags and printed our Qantas boarding passes for us to save us some time in Brisbane. Things were looking good. We’d arrived at the airport at 10 am instead of the 11.45 it ‘should’ have been so we walked outside a little but feared we did not have time to walk all the way to the shops and back so gave up and went into the little departure lounge. It was so cute! I’d guess they had a total of about 200 chairs in there with one tiny café and a tiny shop that shut while we were sitting there.

Well the next thing we knew was that the arrivals screen was saying that our flight was to be 30 minutes late from Brisbane. Bugga! That’s the last thing we needed but we were still hopeful. Silly us! David went and bought us a prawn salad each and I have to say that they were very nice but the time dragged on. If only we’d known earlier of the delay we could have walked to the shops after all.

The plane arrived on time for its delayed timetable so we’d been sitting there for 2½ hours after only travelling for the 30 minute boat journey so far. Not a good start! We walked across the tarmac and everyone loaded into the plane. I’d deliberately booked seats right at the very front – row 2 – so that we could make a speedy getaway in Brisbane to help our cause but once we were all on it seems that there was some kind of problem with one lady’s boarding pass and there was lots of dithering and very frustrating time wasting as the minutes ticked by and our connection seemed like more and more of a fleeting hope.

Eventually the doors were shut and we were given our safety lecture as the plane taxied forward about 2 metres and then stopped. Aaaarrrrgh!!! Now what? We had to wait for a teensy little sea plane to land and we pretty much gave up all hope of catching our Brisbane flight.

The trip was uneventful but the absolute smoothest flight I’ve ever taken. I sat there wondering why I’d bothered with travel sickness meds. I truly think that even I could have done that one unaided, but you don’t know that ahead of time.

We landed in Brisbane and David shoved his way into the aisle with one last glimmer of a wish (can’t call it hope) that we might catch our flight, and I went in front of him and off we ran down the tunnel. I shot off to find the boarding gate, which was easier said than done because the number was not printed on our boarding passes. I was asking help of anyone in a uniform but they all seemed unmoved by my plight. Eventually a lovely passenger in a boarding queue helped me by looking at the screen which in my panic I hadn’t thought to do and sent me off in the right direction.

I found a man at a (misnamed) help desk next to our gate and he assured me that we had (quote) “Bags of time!” He hadn’t wanted to spend that many words on me, it was clear. So I rang David and went to join him. He was just grabbing our bags as I reached him and we hurried to the Qantas check in only to be greeted by a queue of about 15 people and we finally accepted that we were out of luck. On reaching the check-in counter we were told that we were too late and we’d have to rebook at… and a vague hand was waved at the blank wall at the end of the terminal.

Not to go into too much detail… It’s OK, I’ll wait for you to pick yourself up off the ground… the rebooking clerk told us that on our new flight we were not assured catering and that we’d never stood a chance of catching the original one. Well we thought we had; had the first flight been on time, and anything, ANYTHING was better than what now lay in front of us. Another 5 hour wait at Brisbane Airport. And most of that with our bloody luggage in tow!

Well, now we had a change of luck.  In a minor way, but we’ll take any positive experience we can get our hands on.  I don’t know why we spoke to the girl on the end of the Qantas check-in lines but she told us that because we’d missed a flight we could check our bags in up to 6 hours early!  You ripper!  So we did.  And the check-in lady made a humfph noise and said “I don’t know why the other clerk gave you these seats, here, I can get you a window!”  Oh happy, happy, joy, joy!!!!  She was our favourite lady in the entire airport!!!

So, free of luggage, we wandered outside into the grey skies that were trying to drizzle – why not?  We went up the escalators and over the bridge to watch the train but it wasn’t very entertaining and not worth the cold wind so went back inside.  We stayed on the lower level for a while and had a small bite of lunch which was very ordinary and eventually decided we may as well go air side.

We slowly walked the entire length of Brisbane Airport from gate 7 to gate 49, including the legs to the satellite gates.  We bought some assorted lollies from the Sweet Doctor (who was rather hunky!) – almost $20 worth and ate about 80% of them tee hee!

As we walked we could hear announcements for all of the flights being assigned different gates than previously announced and we got caught up in some stampeding passenger lines to boot.  Yes, this is relevant : )

David went for a short walk and when he came back he showed me the departure screen and our gate had changed so up we got and trundled our tired bodies along to the right one.  We’d barely sat down when he looked up and the screen had changed back to the original number.  We were just too exhausted, through doing nothing, to be in the mood for this!  Having heard all the other gate changes earlier we never considered sitting and waiting to see if it was true – and we had both looked at the screen, it isn’t that he was mistaken.

Did we have a nice holiday?  Yes.  I read the whole 6 pages to date last night and I can hear the disappointment in my tone all the way through but it truly was only at the weather, the mud (although it caused entertainment in a grubby, smelly kind of a way!) and the lost helicopter flight.  Club Med was a fabulous idea with as much food and drink (including alcohol) as we could desire, heaps of totally free activities, and some particularly wonderful staff members.  We are rather hoping to go to Club Med in Bali next July but we will see what eventuates.

Oh and PS.  I’ve been told, and rightfully so, that I must thank David for all the cooking that he did last week while I was writing this.  I also thank him for the kitchen tidying that he did afterwards, and he says I must also mention the whingeing he did about it but he truly didn’t.  He’s usually back to work before I write my story but this time he had an extra week off and I do thank you David.  You’re an amazing and wonderful man who I would holiday anywhere with, any time, mud included!