We bought ourselves a roll each from Bakers Delight and a drink from next door to that and sat peacefully looking out over the estuary from seats in front of the tourist bureau once more. After that we saw a Flintstone car and took turns to be photographed in that. If this is noteworthy it really was a lazy holiday! 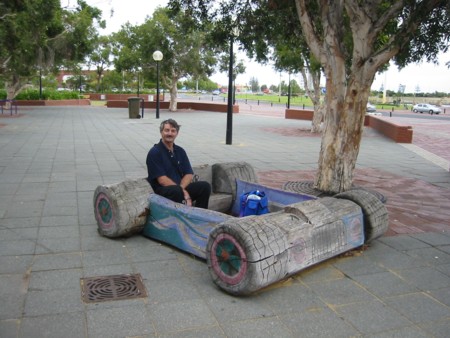 David in the Flintstone Car

I popped back into the tourist bureau to ask if they could tell me where the old drive-in had been as we’d once (maybe 24 years ago?) stayed in a caravan park next door to it and wanted to find it again to get our bearings. The caravan park was still there but the drive-in was now a car yard and was much further out of town than we’d remembered. It was nice to go and look though. We started to head back to town but then David stopped to see what we wanted to do next and I suggested driving down the coast. This meant going back to the caravan park and past it a bit but that didn’t matter so that’s what we did. We could only see scrub-covered sand dunes from the road but suddenly there was a beach signpost so David slammed on the skids and turned into the car park and we both set off, barefoot, along the pathway. Ouch, ooch, owww!!! The pathway was compacted crushed limestone but covered in tiny limestone pebbles and eventually (some men take a lot of hints to get through to!!!) David asked if I’d like him to go back to the car for my shoes. Yes please!!! I pushed some pebbles aside and managed to get a smooth bit for each foot to stand on while I waited. A lady came past and we said hello and she seemed to give me an amused but friendly smile. When David got back he asked if I’d seen anyone cos he’d told her ‘if you see a lady back there stranded, she’s mine!’. Then we walked while I got lectured on the fact that my feet are ‘too soft and sensitive’. The wind was blowing so I managed not to hear most of it. Hehehe. There was a small lookout and we did as we were told and looked out, over the ocean and then back to the car. Seen one ocean seen ’em all really but it filled some moments and gave David a chance to be my hero.

From there we drove along a bit further and then saw a carpark along the edge of the road with 2 guys flying remote controlled gliders so screeched to a halt and drove in the out so that we could park. What else are holidays for? You can drive in the in any day of the year! It was great fun watching these 2 big kids dog fight their planes and sometimes crash. One of them had a son who must have been promised an ice-cream if he did all the running to go and get them once they landed!!! David got some good video of them flying including one mid-air crash which sent one plane hurtling towards the camera and David’s face, but it did miss thankfully.

Now it’s Thursday afternoon, 11th Jan, and we’re wondering what to have for tea. We are both *very* fond of Thai and despite Bunbury’s main street being so short there were 3 Thai restaurants to choose from. We chose which we fancied and headed off for the short walk. Guess what? Closed. So we decided on which of the other 2 to go to and found that to be open. All of the shops along the main street were very old and had very narrow frontages which was great for not wasting steps as you walk past shops you don’t care about. This restaurant was the same, only 2 tables and a narrow alleyway wide but about 15 tables deep. Poor waitresses!!! Above seated-head-height both side walls were mirror-clad so you had that interesting ‘goes on forever’ look. I’m glad it was above head height though, so I didn’t have to watch 20 Mays eat! The waitress brought us a jug of water, 2 glasses and the menus and we chose what we wanted.

Eventually, the restaurant filling fast and us thinking it would now take forever to get any food, the waitress returned and David placed our order. We had to choose between mild, medium, hot and very hot and if you’ve never eaten at a place before you don’t know what you’re in for do you? We both hate being timid and ordering ‘medium’ and then not being able to taste it so went for hot. We ordered Tom Yum soup followed by Coconut Prawns and then Green Chicken Curry and… gosh it’s too long ago now to remember, bother! May have been ginger prawns or something. The waitress said “Hot?” and we assured her yes. She replied “Have you eaten here before?” and we told her ‘no, but at lots of other Thai restaurants’, so off she went leaving us a little uneasy in her wake.

It was quite a wait but the Tom Yum did arrive and by now there wasn’t an empty table in the place – always a good sign eh? We are used to flat noodles in our Tom Yum but every restaurant is different. Steam was rising thickly from the bowls so David, asbestos mouth, started first. I could see it was hot from his face and after a minute ventured a tiny taste myself. Hot? HOT??? By all that’s sacred, hot didn’t come into it. Argh!!! I have never tasted anything like it in my life – took 3 weeks for the tastebuds to grow back on my tongue!!! OK, I exaggerate a little, but you get the picture. And no noodles to even resemble something cool for psychological value. I did have some of the juice but decided the only option was to eat the ‘bits’ out of it and leave the juice. I could just barely taste the prawns and other bits by doing it this way. I’ve heard that having some sugar cools the mouth but there wasn’t any on the table. David had most of the juice in his bowl but left some of the bits. The waitress brought us a 2nd jug of water half way through this I might add!!! What would have happened if we’d ordered very hot? There is no way on earth that anything could have been hotter unless there were lit matches floating on the top!!!

I asked David if he could attract the waitress and ask if our main courses could be medium instead of hot please and as a dutiful husband he did just that for me. My hero. 3 days in a row!

Next up were the coconut prawns. Were they yummy or wot? Deeeelishus. Served with 2 tiny bowls of sauce but I used up all of the sweet chilli one. They were huge prawns rolled in coconut and I suppose fried but were very nice. David did not touch his chilli sauce. Though he was very brave I think he’d had enough hot for one day/week/year as well.

Main course arrived and we gingerly tasted. Boring!!!! Tasty, but boring and not hot enough. I truly don’t know if they ever did change the heat rating of the main course or whether it would have been like that anyway but it would have been really nice to have taken some of the chilli from the soup and added it to the main. And taken the rest of the chilli from the soup and thrown it in the bin!!! Hehehe. But it was a nice meal overall and if we went to Bunbury again we would eat there again. But forget the soup!!!

And so we went home to bed for another night on the concrete bed. This time, however, David opened the sliding doors a little so the wind could travel out more easily without having to announce itself in a piercing whistle as it had the night before, so we slept rather better.

Friday morning we woke up and had our cuppa and toast as the day before. We were just getting ready to get in the shower when there was a hammering at the door. I bolted for the bed and grabbed something to put around me, wondering if the place was on fire. David put a towel around himself and opened the door, but not before more pounding on it from outside. “Yes?” “Did you use the minibar?” What, is it connected with an alarm to reception if you do or something? Good grief!!! Did we use the minibar? We are not the world’s most experienced hotel users – we’ve probably clocked up 7 or 8 weeks in total staying in various establishments in Australia and Hawaii, but I have never had hotel staff hammering the door down for any reason. Particularly “Did you use the minibar?” I could not believe it! It was about 9:30, not mid-day so there was no reason for this urgency. I think we will use the ‘do not disturb’ sign in the future and they can jolly well come back when we’re out. In fact I said to David I was going to put it on the door as we checked out just to give them a problem but he said that was naughty and I mustn’t.

We did manage to shower and get ready in peace after that to start our day and I’d seen an ad for a lolly shop and we decided to go and see what it made. It was called Taffy’s and was fronted by a glass wall overlooking the estuary so you could see people skiing and skidoing(sp?) and was a beautiful outlook. I wouldn’t want to look at it in winter though myself. The guy who came to talk to us was lovely – perhaps Californian by his accent – and he and his son make all the goodies they sell in the shop. He gave us tiny tastes of a few of them and then left us to go shopping. Once we’d got a few bags on the counter he gave us tastes of more things. Yummo!!! We bought some white chocolate covered honeycomb for Nathan and some other good things to take home and then wandered up and down the boardwalk along the estuary edge. There was a lovely pub/restaurant there but we were not hungry so didn’t stop. It was a beautiful area and what I suspect to be Bunbury’s first ‘trendy apartments’ were being built there. Or converted may be a better word – it looked to us as if it was some old wheat silos.

I must say in passing that everyone down in Bunbury was very friendly, helpful and pleasant. Cars would stop so you could cross the road. At one point I was crossing a road alone and a P plate car (young driver) stopped so I could cross. He didn’t even accelerate once I was right in front of him!!! We were very impressed that city life has not yet affected their laid-back country attitudes. It was very nice to enjoy.