On 6th Feb 2017 David’s 6-year dream came true and we collected our very first caravan. We have since named her Rosie, in honour of my beloved Aunty Rosemary, who owned one. For now, until David retires, we are making the most of occasional weekends away.

Just a short distance north has us out of the metropolitan area and into the country. The same is not true heading south – it’s a good hour into, and then through, the city centre, then onwards through the southern suburbs. Fortunately this is straight down the main freeway all the way so not difficult, and then the South West is ours for the taking.

One day I will start to report on The Big Trip. The One that will entitle us to be called ‘Grey Nomads’ like the many folks who have ‘done the circuit’ around the whole of Australia. In the meantime we’re having fun in practising our skills closer to home.

But for now, here are our small weekend adventures. Just choose one and click on the link provided here to read all about it and see the photos.

PURCHASE & TEETHING PROBLEM NOTES
Sunday 29th January, viewed the caravan that David had been drooling over on the web for the past week. I’d been resisting this purchase for about 6 years, but we now had a suitable vehicle. I was still resisting, but the van had a gorgeous picture of a blue wren on the door, and leadlight on the glass doors inside. Both were giving me the impression that this was The One. She’s 14 years old but in amazing condition and with brand new, top of the range, air conditioning. The stove also looks brand new, it’s so incredibly clean! Well, the whole thing looks incredibly clean. We were to later learn that the previous owner had been ‘meticulous’. Indeed he had, and we were grateful for it. It was raining.

Monday 30th January, went back for another look and to sign on the dotted line, though we couldn’t bring her away with us until she’d been thoroughly checked by the workshop. It was raining quite hard and the salesman, David and I all huddled under our individual umbrellas. This is the middle of a Perth summer!!!

Monday 6th February, spent 1½ hours being shown everything that opens and shuts on the caravan, but not actually being *demonstrated* anything other than putting the annex out and packing it up again. Everything else was ‘waved’ at’. Specifically, the parking maneuvering system could not be shown to us because “We all had a play with it this morning and now the batteries are flat”. Hot water system wasn’t shown because there was no electric and no water plugged into the van. We hitched her on and David drove her home. It was a hot day and I got a little sunburned.

Tuesday 7th February, took down all the curtains and washed them, and cleaned all the little tiny windowsills, which were quite gritty, even though everything else seemed well-cared for. I spent an hour after David went to work checking and labelling the crazy number of keys that had come with the van! 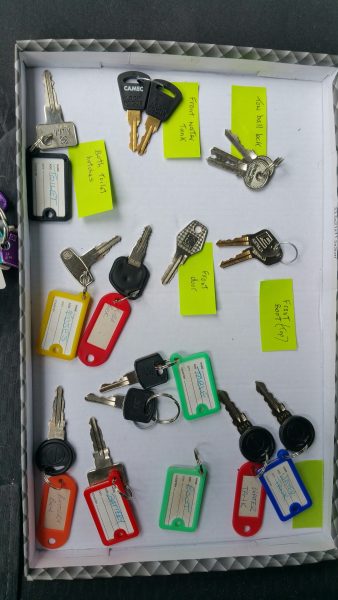 How many keys can one caravan need?

Wed 8th to Fri 10th, continued to clean Rosie on the inside (you know how you do, even when it’s clean) and put some of our own things in there.

Sunday 12th February, drove the van to Ocean Reef Marina car park, a massive open space, and tried out the maneuvering system. It didn’t move far and it was letting out an almighty screech. Subsequent testing proved that the front pair of cogs worked perfectly but the back pair were set solid and wouldn’t move. It had been their motors letting out the screech because they were being forced to move against their will.

Wed 15th and Thu 16th rang to see how they were doing. Slowly it seems.

Friday 17th February, rang, twice. And then went there anyway to wait to get Rosie back. We’d planned a trip away that weekend and really needed to get as much as possible packed before David had to go to work. More than that, we needed it back before David went to work so that he could reverse it into our driveway, a task that I can’t ever see myself willing to do! Finally Rosie was ready for us. The yard had replaced the maneuvering system wiring, which had looked burnt out, and tried to fix the battery box key barrel, only for the new barrel to explode in their hands the moment the locksmith had left their yard. Got home and the maneuvering system still wouldn’t work! David had accidentally put the caravan wheels brake on so that didn’t help, but wasn’t the whole problem. Then the jockey wheel turned at right angles to the direction the caravan was moving and, combined with the slope of our driveway, the jockey wheel bent – badly! Fortunately the yard had a new one and David was able to go collect it on his way to work that afternoon, obviously at our expense. 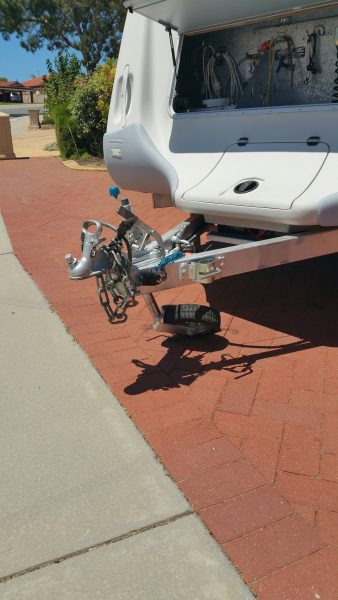 One ruined jockey wheel and a lesson learned.

Saturday 18th February, the fridge had been plugged into the mains since getting back to our house around 1pm yesterday but was still not cold. Frustrated, David went and bought 2 bags of ice and filled our big esky with them, and our fridge needs for the journey. Once at our destination, the gas bottles, which had been showing as half full, were suddenly completely empty and he couldn’t get the hot water system to turn on, even using mains power. Thankfully the caravan park caretaker was really helpful and kind and was able to fill our gas bottles, and give assistance to get the stove working on gas even though the hot water still wasn’t working. Until David found a hidden valve at the very back corner of the kitchen cupboards. So much to learn!