David prepared us a gorgeous looking fresh fruit salad for breakfast with our stash from shopping the day before. But, totally contrary to our expectations, most of the fruit was really bland! Such a shame, because he did a beautiful job of displaying it prettily. 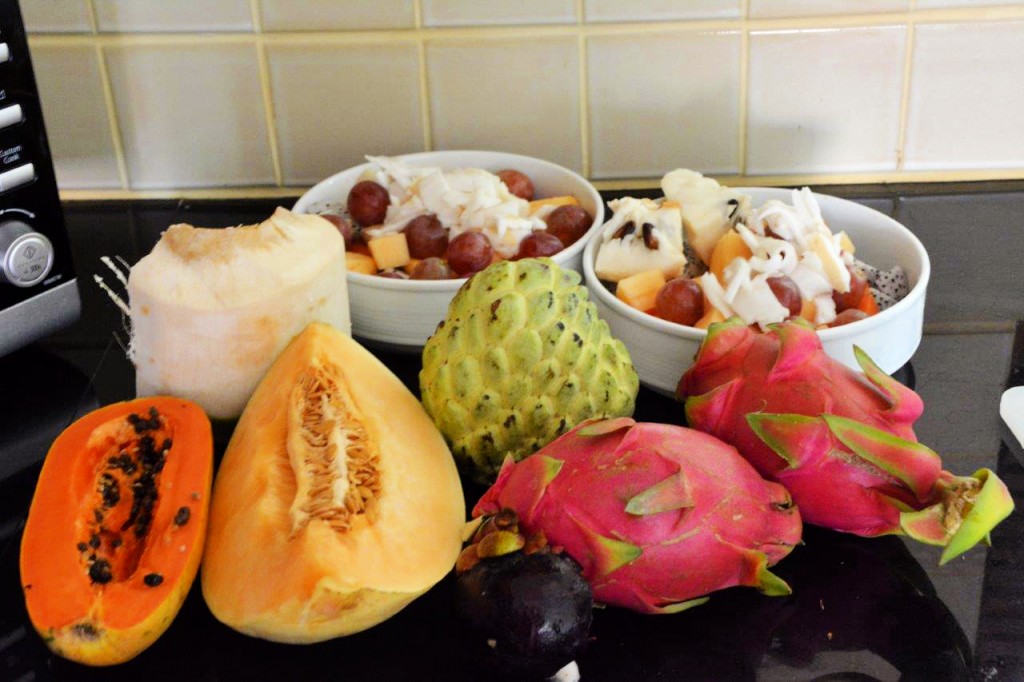 We decided that we’d go for a run on the beach, but this time barefoot so that we could splash through the rivers, but as we went to pass reception there was a different girl there and she asked us to pay a deposit. Truly? We’d been in the resort since Saturday afternoon and she was asking for a deposit on Monday? We were stunned! We also had some issues with this. For one they wanted it in Thai Baht. Well that’s fine, but when they pay us back, as we head for the airport home, what are we going to do with Thai Baht except have to pay to have it converted back to Australian dollars after we get home? We asked if they would swipe our credit card instead, but apparently they didn’t have the facility to do so!?!?!? So we asked them to take it in Aussie dollars which, after a phone call to check the exchange rate, they did. So we parted with $150 and I made sure that we got a receipt for it!

As well as that, we pointed out to them that we were already missing several items of cutlery and crockery, as well as the shower curtain and etc etc, and some of the kitchen things were dirty, as well as dirt inside the kitchen cupboard under the sink and a musty smell in there. We didn’t want to get blamed for these so the receptionist accompanied us back up to the room to have a look. She eventually said that she would come back later with a camera – seemingly, counting to 4 of so many things was too time consuming. We don’t know if she ever did return. Certainly not while we were ‘home’.

On a better note, our run was fantastic. I don’t think I’ve ever enjoyed a run as much as I did this one and we ran, and ran, and ran. The sand alternated between being really soft, and then being rather course – which I didn’t think a lot about at the time. We’d worn thongs (jandals, flip flops) to get to the beach and just carried those in our hands as we ran. Occasionally the waves lapped up over our feet as we trotted along and it was just perfect. We continued to walk for a while when we could run no longer, and then turned for the return journey and alternated jogging and walking. By the time we got half way back I could feel the end of my second toe and it turns out that I’d worn half the skin off of it, causing what looked like a bruised area with 2 blisters piled on top just for good measure. Oh dear!

Even so, we returned puffed but happy and had a fruit smoothie each before showering and then returning to the little restaurant for breakfast. We just didn’t fancy the rest of the fruit, and still hadn’t bought any marg/butter or jam for the bread in the fridge even from Tesco! Why we were even so intent on catering to this half loaf that had been left for us I don’t even know.

After breakfast we got our cameras and walked back to Nok and Jo’s to get some photos of the amazingly unusual furnishings! It seems that Jo, a Canadian guy, had come to Phuket to help rebuild after the tsunami, and had obviously liked what he saw and decided to stay. What he liked included the lovely Nok, and they set up the restaurant. Practically everything here was built from wooden branches or trunks – and much of it very much larger than life! 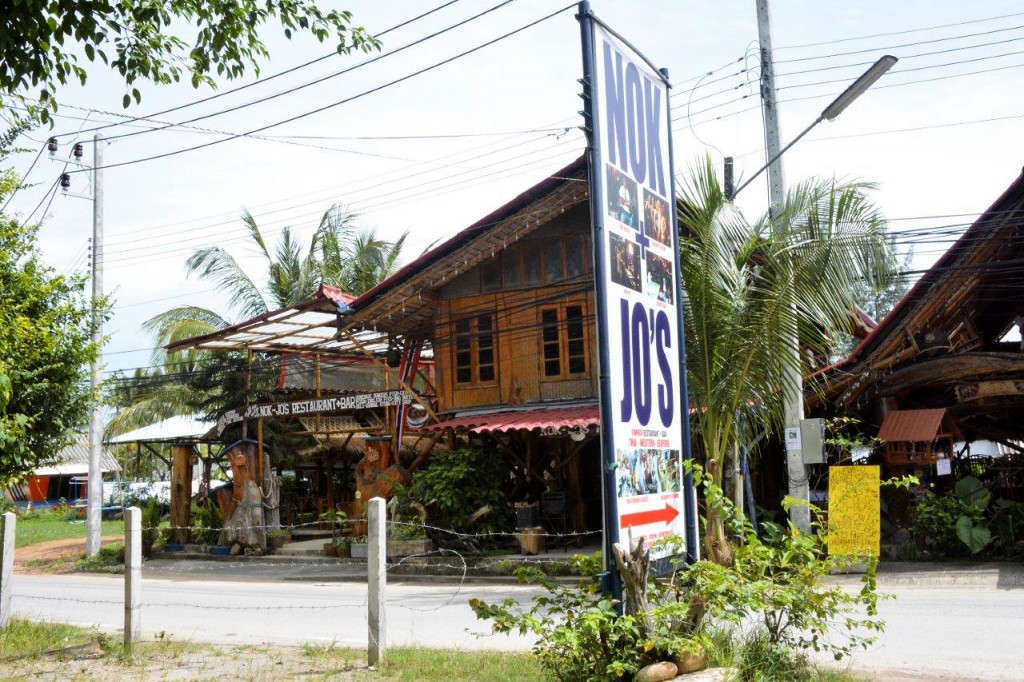 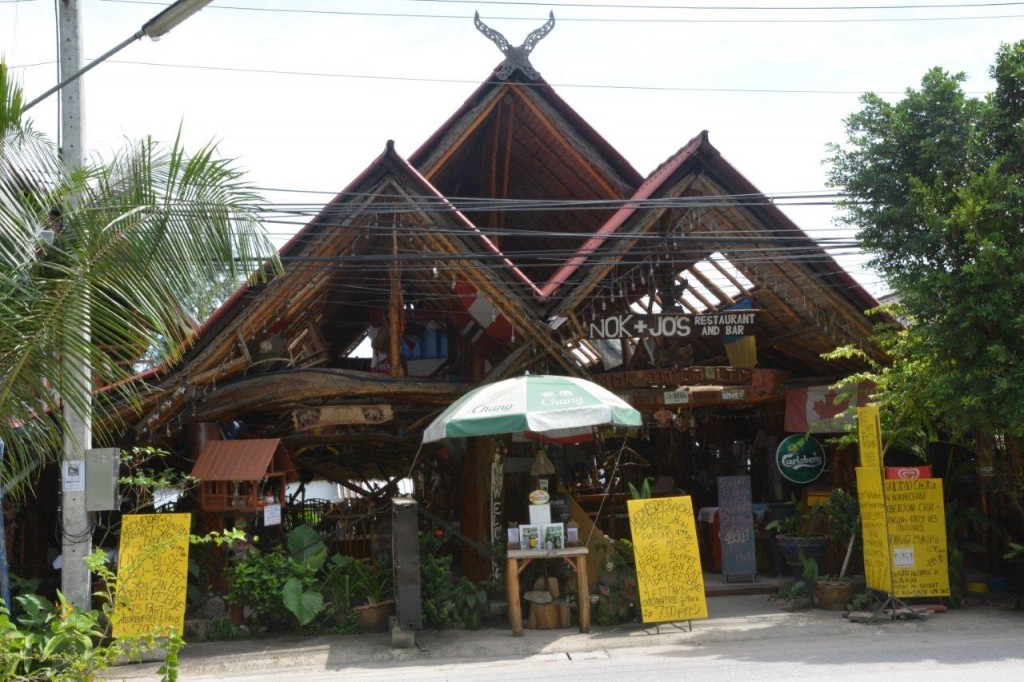 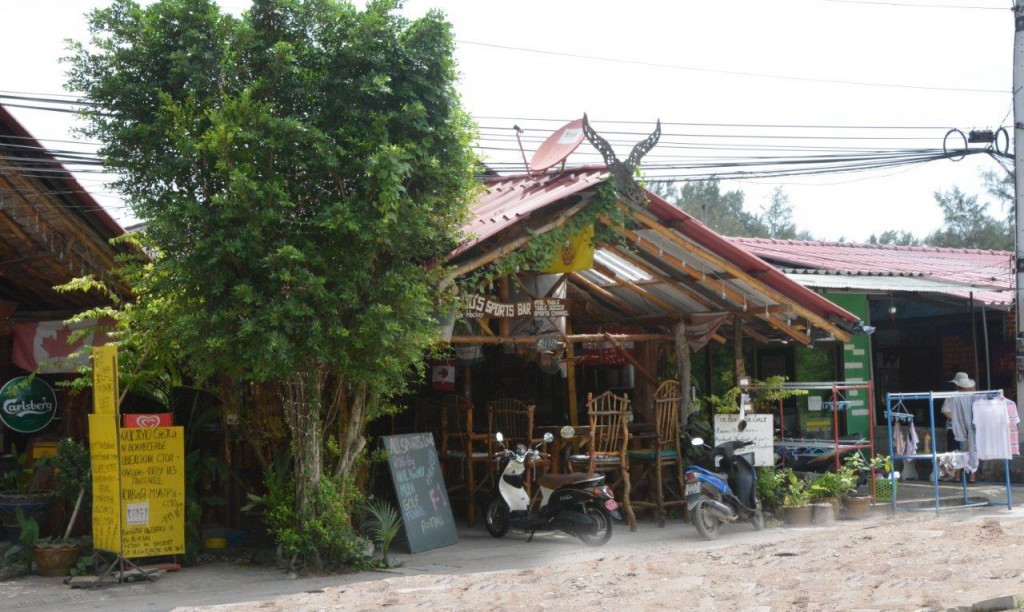 It was impossible to get a good photo of any of the furniture because there was so much other wood around that it all blended in. Literally couldn’t see the wood for the trees I guess! But I hope that you can get some idea from these photos of what the chairs were like. 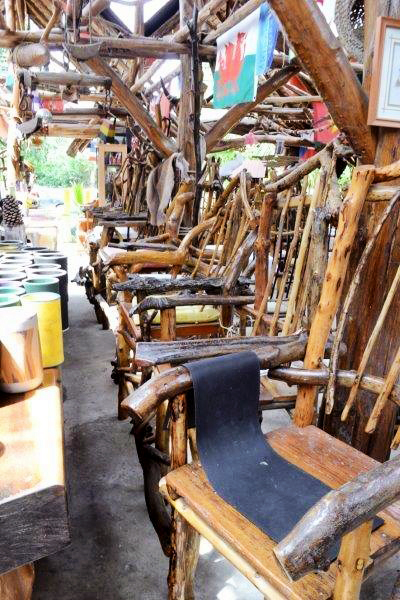 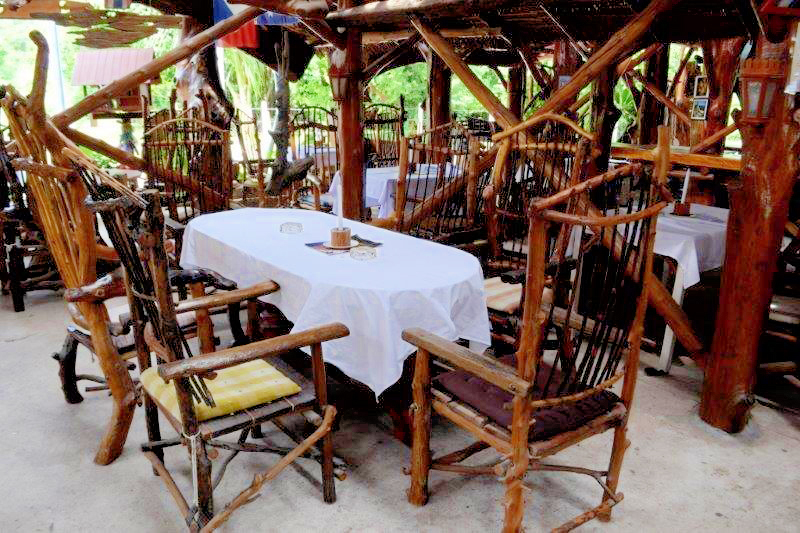 As we’d walked in, Jo was there eating his breakfast and just dressed in some cut-off jeans. We never dreamed that they were closed on Mondays. The place can’t be closed up in the traditional sense of the meaning. This place has no walls, no doors, and remains completely undamaged. How idyllic is that? Jason, in the resort restaurant, was always saying that the crime rate in the area was zero – he is perfectly safe to leave anything on his bike while leaving it unattended, and leaves his house doors unlocked at all times. I wish that everywhere was like this!!!

Soon enough we went back to the resort to be picked up in a tuk tuk and go out for lunch. We ordered jacket potatos. I’d chosen a tuna and mayonnaise stuffing and David a “chicken something or another”. David took a bite of his first, looked a bit surprised, and mouthed at me “It’s COLD!!!” It had taken so long to prepare that this was definitely a surprise – to say nothing of the fact that jacket potatoes are supposed to be piping hot – 100% of the time!

Feeling that the day had been wasted, (well, I did, David was a little more positive) we decided to go for a walk on the beach to photograph the things we’d seen during our run this morning. The beach had been about 50 metres wide, but this is how it looked now!!! 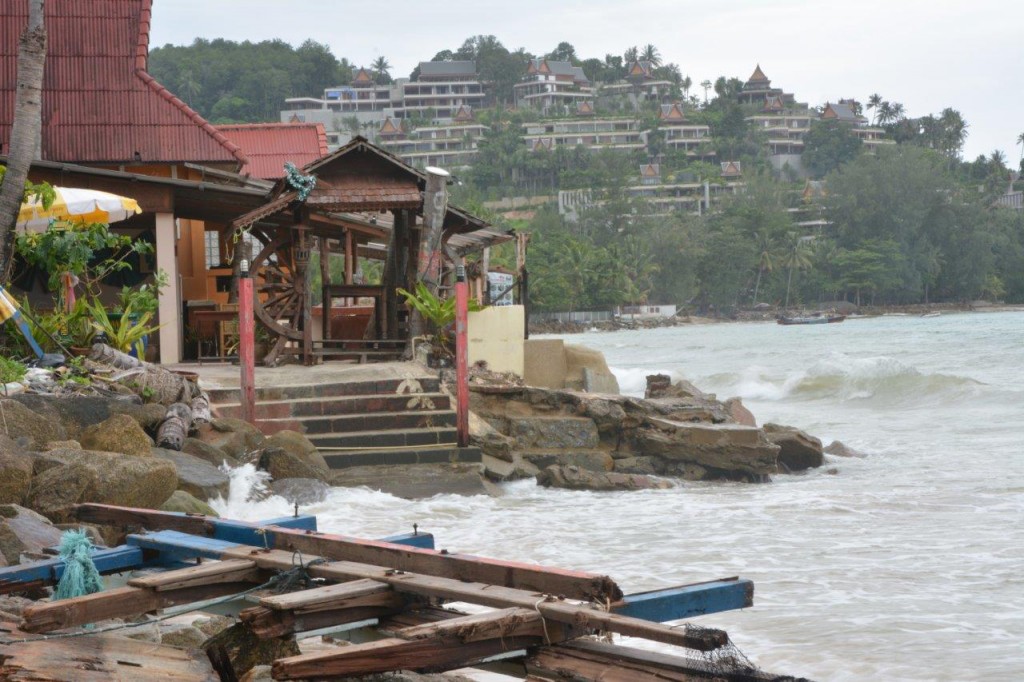 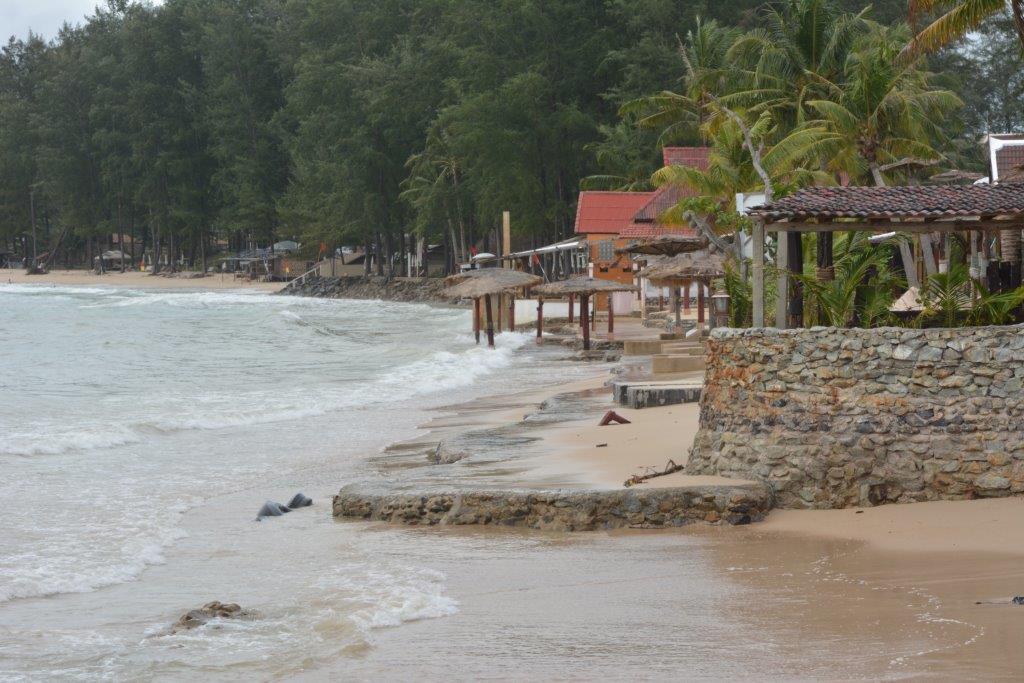 We tried the second footpath entry to the beach, hoping that there may be a little sliver of sand to walk along, but no, so we clambered like mountain goats up a pile of very rough rocks and into the grounds of one of the resorts along the beach edge and tried to look as if we belonged there as we walked along. We traversed two resorts this way, but still the persistent Andaman Sea lunged hungrily at every inch of beach it could cover, so we turned right past the tradesman’s entrance side of the next resort to get back to the village road and retrace our steps, having achieved nothing exciting at all.

The road led east and through some wetlands. We wanted to head south, but eventually the road did curve around and we felt we were heading in the right direction. It weaved all over the place with nothing of interest, no buildings, just an occasional scooter going by, and many stones and potholes under our feet before we finally turned a corner and it began to feel ‘right’. David said he was rather relieved because he’d be glad to use the facilities when we got back to our resort, but, better than that, we came upon a most unexpected sight. A really large, and nice looking bar with a mini golf course around it!

You’re on! We walked right on in, took a seat at the edge looking out on the golf, and ordered a drink each. To cut to the chase, David ordered a beer and I ordered a chocolate banana cocktail. It came as no surprise to me that the drink that arrived was pink! And not any shock that it had a soggy strawberry in the bottom. To tell the end of this story while we’re still on the subject, when we went to pay they were charging me for a banana berry cocktail, which of course turned out to be what I’d received, not what I’d wanted and ordered. I’d passed the point by now where I expected anything to be what we wanted or had hoped for on this holiday. I’m normally quite a positive and cheery person, but this holiday so far had been just one disappointment after another. All were minor things, and nothing to grumble about individually, but there certainly seemed to be a horribly consistent stream of them.

However, before we paid the bill and discovered the mistake, we played a really fun round of mini golf. The grass was astro-turf, but it didn’t matter at all. The grounds were truly manicured, the course inventive, and we enjoyed ourselves thoroughly. The first thing about this holiday I’d actually say we would give a 10/10. There was a gorgeous man-made river running through, as well as a large pile of rocks with a water fountain cascading over them. I was impressed. 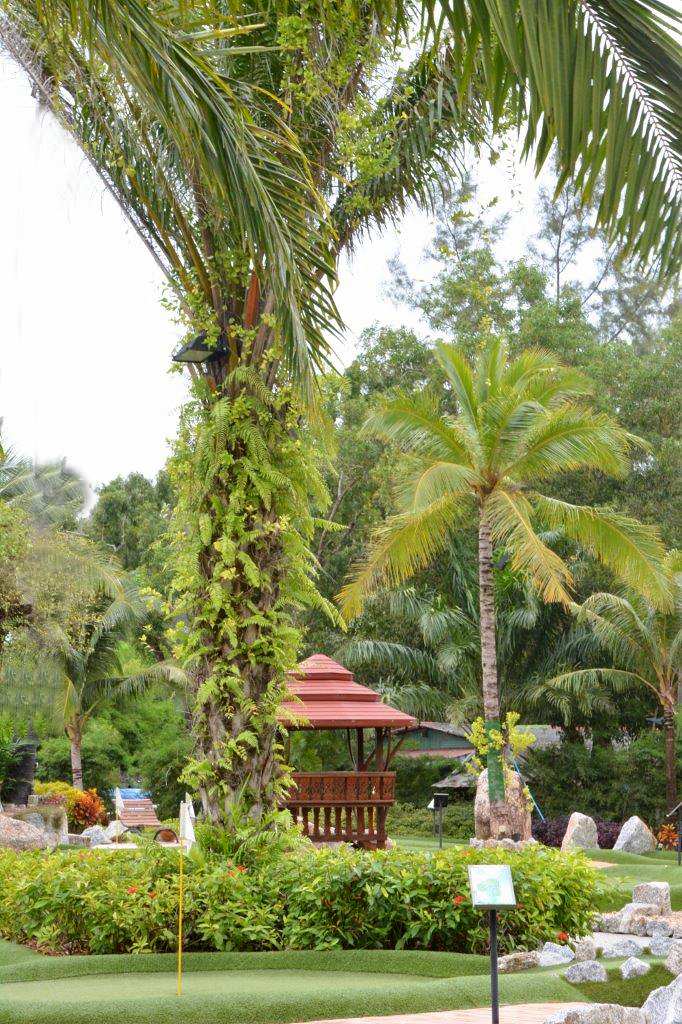 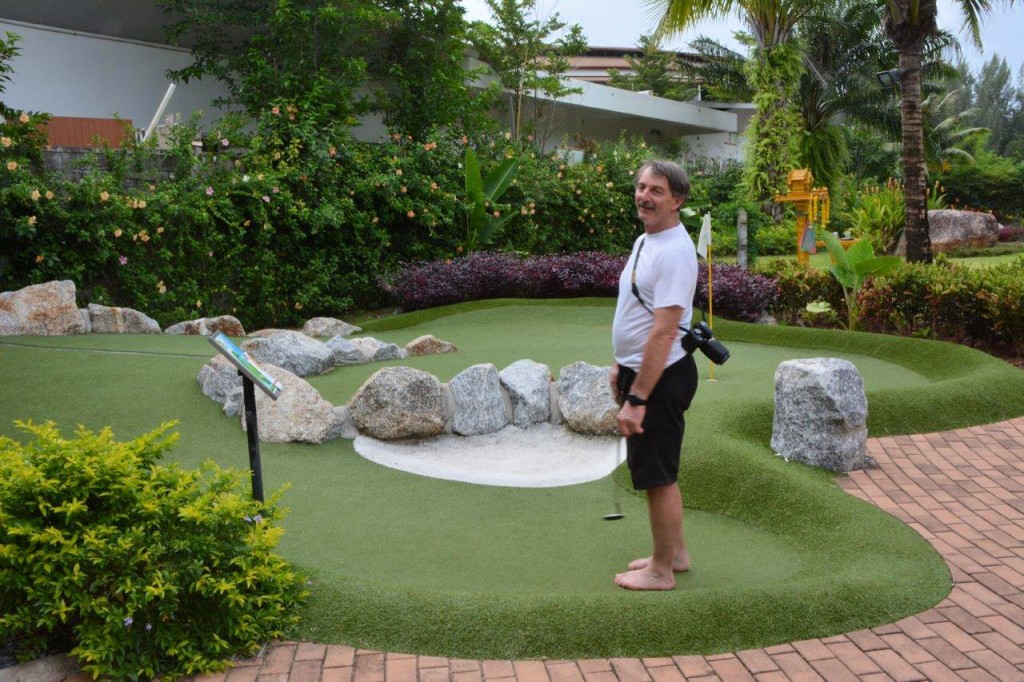 After this, we easily found our way back to our room only to find that the cleaners had been in. They had moved all of our stuff around and made neat stacks of it on the side table. Our chips (crisps) and biscuits (cookies) were missing; our butterscotch lollies from the plane had been tipped out of the pack into the fruit bowl and the packet disposed of. A heavy-duty zip-closure bag that I had packed to keep David’s camera dry in the event of rain had been taken/stolen/thrown away (chose your own interpretation). I was a great deal upset about this. I know it was ‘just a plastic bag’ – it had come free with a set of sheets inside it – but it was *my* plastic bag, it was packed and brought all the way from Australia for a specific purpose, and nobody had any right to take it and/or call it rubbish. It had been on the dining room table, *not* in or near any rubbish bin, nor on the floor. And if they had taken/thrown away this, what else had they taken? I was not happy at all.

We went for a swim and booked a cruise for the morrow, and for some reason braved the restaurant for dinner. I was grateful that the nose-fiddling girl didn’t ever go into the kitchen, and I did not order a drink that required anything but pouring from the bottle.

On our return to our room we found our biscuits and chips – in the fridge. Where else would you put a packet of biscuits and crispy chips???!!! They’d also put David’s drinking water, that he likes at room temperature, into the fridge.

After we went to bed I began to cry, but David hugged me tight and gently told me I was being silly, which I agreed with, and we slept well.

Next page/… Please feel free to leave a comment in the fields below before leaving this page. Email addresses will not be used in any way, nor displayed for anyone to see. All comments are hidden until approved by me and spam will not be approved