Time for a little report on our little holiday to Bunbury, just a couple of hours’ drive south of Perth…

We left Perth on Wed, 10th Jan at about 10:30 in the morning and travelled without hinderance or events of remark to Mandurah where we stopped to stretch our legs and fill our tummies.  When we saw a Cicerello’s there we thought “Oooh yummy, specially nice fish and chips!” so headed our feet in that direction, having parked the car before we saw it.  This is David and May we’re talking about.  We got there, place is full of people gobbling up their yummy lunch, but when David tried the door it was locked.  It was a double door and he pushed and pulled both to no avail so we walked around to the next side.  A single door presented itself here, but that was locked too.  We’re giggling by now and continued around the building, watching out for candid cameras.  Yup, it was open on this side and the queue was pretty long so David said he didn’t want fish and chips any more and we’d go next door.

Next door was called The Boatshed and I had a nasty feeling it would be expensive.  We ventured through the door to be greeted by a complete absence of menus anywhere to be seen.  A waitress said she’d be with us in a moment but David went up to the counter to ask where the toilets were.  Now we were committed weren’t we?  We took turns to use the facilities, by which time the waitress had brought us a glass of water each, with a slice of lemon in.  Yuk.  David said this was to hide the taste of it having just been scooped out of the estuary and maybe he was right, but I think the only thing ruining God’s good water was the lemon.

Now she delivered the menus.  I’d rather fancied fish and chips but the cost of this exotic delight at The Boatshed was $27.50!!!!!  Gulp.  We’d have fed both of us, drinks ‘n all at Cicerello’s for that!  So we looked more and David chose a Caesar salad and I chose something about mushrooms on brioche – boy was that different!  The dish arrived with the toasted bread on the bottom topped with a paste of some description – possibly anchovie – with sundried tomatoes in it, then the baked mushrooms topped with some greens sprinkled with perhaps soy sauce or something of that nature.  Very interesting.  It was nice, and an experience, and I probably would have it again even though half way through I wasn’t sure if I liked it any more.  But, having had a mouthful of bread, was ready to love it again.  Most odd.  We washed it down with pineapple juice and soda water – David was driving after all.

It was really odd in a way for the price – there were no coasters so our drinks were left to make condensation puddles on the table and drip everywhere, there had been no menu (as I’ve said) and our meals were delivered before the cutlery to go with it which came almost as an afterthought.  I mentioned this to David and he reckoned I was just whingeing and said “I’m gunna get you debarked!!!”  Very funny, trying not to react… 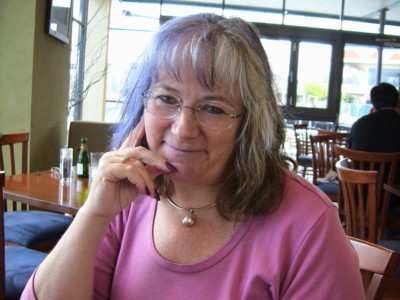 And as is often the case with these high priced restaurants the waitress brought us the bill in one of those black folders.  As David opened it there were also 2 wrapped mints and 2 wrapped toothpicks in there – he was MOST impressed, opened his mint and popped it in his mouth, looked around the room ‘loudly’ and then with a swift, furtive move, shoved the empty wrapper back in the folder and shut it fast.  Well that set me off.  He has such a way of bringing anything snooty right down to the gutter!!!  And as soon as I started to recover he began saying he should use the toothpick and put that back in there too…  Eventually I was in control once more and we got out of there fast – the waitress looking at me sideways as my mascara was heading south.

Back on the road for another hour and we found our hotel with no effort at all.  They’d said it was next to the tallest building in Bunbury and it certainly was.  Not many of those to choose between – just the hotel itself, the Bunbury tower, a small apartment block still being built and the lighthouse.  We checked in, found our room, unpacked our things without fuss, and went out for a walk.  The ‘cappuccino strip’ was only steps away so we had a nice cup and then continued to idle up the main street and then back on the other side.  Very peaceful.  Very laid-back country, even though Bunbury IS a ‘city’.  We bought a loaf of bread from the bakery and a packet of butter from the deli as there was a toaster in the room so we had that for breakfast the next 2 mornings.

On going up to the room David realised we did not have a bottle opener as he’d taken some wine and needed one. The room supplied a leverage style one, but not a corkscrew so he went to ask reception if they had one he could borrow. My wine was openable, but not his. He rang me to say reception suggested he go out to the shops to buy one and he’d be back soon. I settled down with a book. Trouble was when reception had said ‘left then straight ahead 2 roundabouts and you’re there’ David thought she meant left at the first roundabout and then straight ahead, not just left out of the hotel door. I got lots of reading done!!! He rang me after a while, the happy hunter having captured the elusive beast at a mighty cost of $2, and asked if I fancied Subway for dinner as he was standing right next to one so that is what we did. We’d spent enough on lunch, so a nice healthy, yummy, cheap dinner sounded perfect. And peacefully together in our room with no animals begging us to drop some for them was a really nice way to start our Bunbury stay. 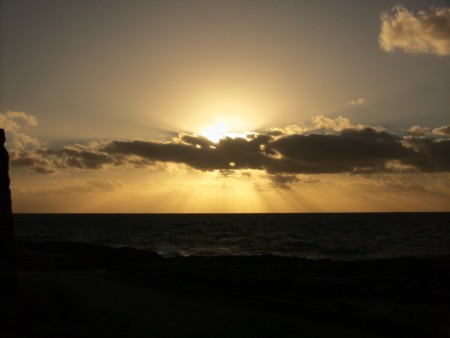 Bunbury Sunset over the Ocean

We did venture out once more, just before the sun was setting, and went for a walk to the beach. The hotel was exactly half way between the estuary waters to the left of the main doors and the beach to the right – only a 5 minute walk in either direction – so we got to stand and watch the sun set over the ocean and David took some lovely photos just to prove we’d been there.

And so to bed for our first night. It was actually quite cold in the room and I messed with the aircon but it only did cooling not heating, so we got the extra blanket out of the wardrobe and put it on the bed. Even so I had to snuggle up to David and get knotted (arms and legs intertwined) for ages before I got warm. The bed, after our waterbed, was like concrete and the wind, presumably from the central aircon as ours was off, whistled loudly through some unseen gap in the sliding doors. David hardly slept for the noise and although I did sleep once my good ear was immersed in pillow, my right hip was being impounded into my stomach area by the bed’s hardness. However, we went to bed at 10 and did not wake until 8:30 so I guess we’d got enough beauty sleep between times.

We idled around, had toast and our cuppa – tea for me, coffee for David (we have nothing in common!) – and showered and were eventually ready to go out by about 10. David wanted to go to the tourist information place and I wanted to see the shops he’d gone to yesterday. In passing we went to reception and asked the girl there what there was to do around the place but she looked at us as if we were quite mad, stammered a bit and still could not come up with any suggestions. None!!! Except to pass the buck and send us to the tourist info office where we were bound anyway. What a laugh! 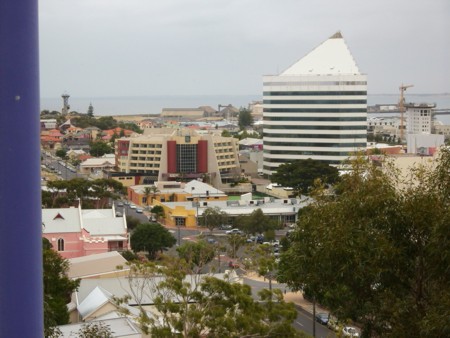 Bunbury Hotel dwarfed by the office building next door

Firstly we remembered having seen a lookout signposted so drove off to find this. It was not far – Bunbury is pretty small so nothing was far – and it was a drive-up one so no effort involved. From here we could see our hotel, next to the tallest building, remember? And from there we could see another lookout so drove to that too. This one was a climb-the-stairs version and the wind was howling at the top. My poncho thing was flying almost straight out behind me so I made Superman arms – as you do! We didn’t see anything else to do so decided the tourist office was still our best bet and off we went.

We pottered around in there and I found a lovely fridge magnet with a blue wren on it which I bought for Amie as she loves blue wrens, and we picked up a couple of maps which confirmed what the reception girl at the hotel had inferred. Nowt much to do in Bunbury. But that was OK. From there we went to the shopping centre where most of the shops were no different to Perth but we did find a gorgeous gift shop where we bought a present for Dan, Christina and Georgia and a really cheap pair of shoes for me to replace my favourite ones which had broken a few weeks ago. There was also a display here attracting great attention and when we managed to fight our way to the front we found glass boxes with spiders, snakes and all sorts of wondrous things in. One was a ‘burrowing cockroach’ which must have been 2½” long by 1″ wide. Shudder! A lady assured us that cockroaches were the cleanest insects of all – get out the Dettol would ya?