Thu 7th Feb
I awoke at 6:30 and David was still sending up zzzz’s – MOST unusual on all counts so I crept quietly to fill up the kettle and turn it on for him, and to get myself a juice and I sat quietly reading for about half an hour until David wriggled. I excitedly made him a cuppa – excited because I so rarely get to make him his first drink – and took it through to him. “What are you doing awake?” “I don’t know, I just am” “Disturbing decent people in bed with cups of coffee, I don’t know!” Hehehehe. We had breakfast of toast for David and Swami-fruit for me, followed by showers, and then set out for a walk until the exciting time to meet Swami at the fruit café over the road for a smoothie.

We walked along, still laughing hugely at the cars doing nose stands to stop at all the cross-walks and feeling guilty for holding them up as they stopped the moment you even THOUGHT about crossing!!! We first went to look at the beach which was incredibly wide between the foreshore and the ocean, and also incredibly flat, and realised we weren’t sure of the ocean’s name over this side of the country so we giggled at that. It didn’t register that we’d come down the Pacific Motorway the night before so our guess at it being the Pacific was correct but I guess we don’t win points for brains because of the circumstances surrounding our vague knowledge. Isn’t the ocean between Sydney and NZ called something else? Geography is not my hot topic as you can see lol. Then we wandered up and down the foreshore shops, cafés and restaurants to see what there was to see but our minds were on meeting Swami so we soon went and hung around the Garden Café in case she was early so that we didn’t waste a minute.

After a little while, along she came, waving hugely at David who she recognised instantly from across the street, and it was hugs all round. What a delight she was. A beautiful face and such a petite little build, but more than that a gorgeous person. We talked and talked, and laughed, and had the most delicious smoothies with such an incredible amount of fruit hanging from the straws that you’d think the straws would bend from the strain. Oh, I should have said before that the weather was fine and clear and perfect too.

All too soon Swami’s parking time was up and she had to go, so we walked her to her car and stood there talking more because we could see that the parking inspector was not in sight, though s/he had chalked the tyres. Swami had brought a set of poi with her to lend to me as I’d always wanted to try them, so every day after that in the hotel I was having a little practice. It was so good to meet Swami after such a close e-friendship for the past almost year. We made plans to meet again on Saturday but parted reluctantly with more hugs.

Our plan now was to go to Infinity at the Chevron Renaissance Centre at Surfers Paradise. I’d seen an ad for this place as we’d driven through in 2004 and was so disappointed that we had not had time to see it on that trip. But the time had now come to fulfil that dream and we set off with the map book on my lap after Swami had given us advice to drive up the Gold Coast Highway to get there. I was fascinated that they had both highways and a motorway – most places use one term or the other. We accidentally passed the entry to the underground car park but were able to turn right at the next lights into a car park and come back through, and found a parking spot right near the ramp to the shops with great ease.

We decided to have lunch before going to Infinity so found ourselves a café with a nice blackboard special for 2 courses and got comfortable. This was called The Chat Room as it had computer access at the back and there were quite a few early 20s guys with laptops sitting around. I got the impression that as long as you bought something the access was free. For entrée we got a Caesar salad and some garlic focaccia with salsa which was nicer than it sounds, and shared both and I can’t for the life of me remember what we had for mains. Then off to Infinity which was just a shop sized place in the middle of the open air mall.

I was so excited and could hear the techno-style music from the outside. We had to hand over all our bags etc which they put in a locker, and they gave us white cotton gloves and shoe covers to wear and then sent us on our way down a black fabric covered hallway into… darkness. There was a little safety video and a few stairs to climb and we were on our way into a small unlit, black corridor. I did not let go of David’s hand for the whole time we were in there!!! And I’m meaning the whole place, not just this part. He had to feel around to find the way out of this ‘room’ and when he did so, we found ourselves in another corridor that had limited lighting and mirrors on every wall, floor and ceiling. But there was a problem – I’ll see if I can draw a picture looking from one end of the corridor, which was in fact only about 3 metres long… 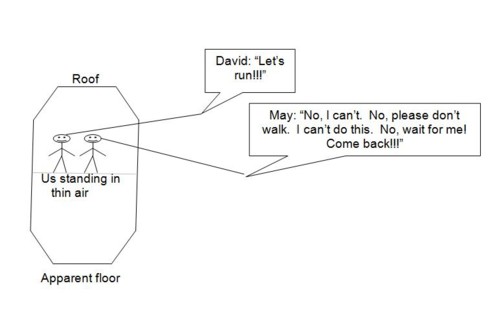 Every step we took was just a terrifying as the one before.  We KNEW our feet were on solid ground, we KNEW we were walking on mirrors and the floor was solid below us, but convincing your head to let your feet move was another matter entirely.  Even David (generously lol) admitted he found it difficult to take a step.  We did get to the other end of the corridor and then he was bouncing around like a 2 year old, boing, boing, boing, “More?” and wanting to run up and down just to prove it could be done.  I still had difficulty putting each foot out, no matter that we’d just come from there.  And it was also time to move on now that we’d found the door out of this room.  The next was yet another dark, small space, this time with bits of who knows what hanging from the ceiling.  It was fluffy feeling – perhaps strips of soft sacking or something.  [Nice alliterations May!!!]  I held my free arm up in front of my face.  I wasn’t bothered, as such, but I choose not to have unknown and sudden happenings around my mouth and nose – and glasses!

The next room was the most amazing thing I have ever seen.  I never, EVER wanted to leave it.  I wouldn’t have cared if I’d starved to death, I did not want to leave.  There had been a note outside this one saying to pretend that we were electrons in a huge computer.  Again this room was all mirrors, and also maze-like in that it had several corridors, but the effect was from just a very few rows of small coloured lights set behind the mirrors so that they showed through tiny holes in the mirror backing.  With the effect of all these mirrors it gave the impression of being in something endless in every direction, just filled with these beautiful rows of flashing lights.  One minute the view was blue and red, the next, yellow and green… rows expanding into forever.  We could see reflections of ourselves too, but the lights were the main focus and it just took my breath away with the incredible beauty, and the next thing I knew I was crying.  It was just more beautiful than I could ever describe.  David tugged on my hand a couple of times but I just kept saying “Not yet!”  In the end another 3 people 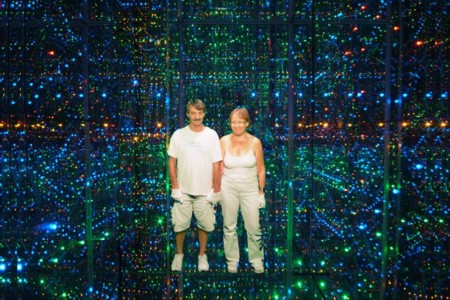 came in so we felt we’d better move along to let them enjoy it in peace as we had done for quite some time by then.  It took us a while to find the door out – shame hehehehe.

I won’t go in to details of the other rooms; there was fun and funky, eerie, weird, and one ‘photo opportunity’.  The picture is actually manipulated to look as if it was in my beautiful room, which it wasn’t, but it gives you a bit of an idea what the room was like.  It does not come close to doing it justice though.  It was odd that in here we could see down, down, down, but there wasn’t the fear of falling that we’d had in the previous room.

So we eventually came through all the other rooms with so many different themes and experiences and made our way out, got our belongings back, and purchased the above photo at great expense.  But I think it was worth it to be reminded of how an electron feels and to jog my memory into experiencing that amazing room over and over again.  I so want to build one here, I have a dining room I’m willing to give up!!!

From here we walked around the shopping centre to see what there was to see.  One of the ‘features’ was a guy offering scratchies so we took one each, asking what the prize was and were told a holiday on the Gold Coast.  David replied “That’s what we’re already doing, why would we want another one?”  He scratched his card and only got one sunshine – no good.  I scratched mine and got all 3!!!  Showed the guy and he was incredulous and I saw him looking backwards and forwards between us; totally baffled because we weren’t bouncing around with glee (we were waiting to see what the small print was!), and his remaining pile of scratchies.  I could hear his brain whirring with the question ‘what use are these remaining scratchies if the main prize has gone?’  Anyway, the small print was that we had to attend a 1½ hour time share presentation and we have to pay our own air fare, but that’s not bad eh?  We were happy, just not in the way he’d expected.