After walking around this part of the ‘park’ we’d enjoyed walking over a little bridge and seeing a few unusual birds but were then signposted towards the beetle display. This again had chains hanging down across its doorway but it also had another surprise. Amongst the chains was this young man… 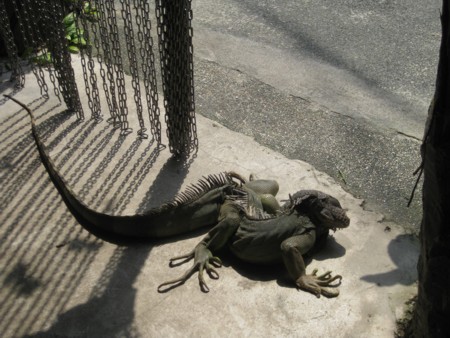 Hasn’t he got the most amazing feet?  Now I do have to tell you that his toes are not circular, as they appear.  They are normal (for a goanna) long toes, but where they lift off the floor, the shadow below makes them look as if they have hollow circles as toes and it looks so pretty!

Imagine stepping from the bright light of the garden, through these chains into the darkened display area beyond and accidentally stepping on him? Or suddenly coming across him in one of the dusky corridors beyond the chains? We didn’t know if he was an escaped display; nor if he would bite, scratch, maim or worse so David went back to find a staff member and ask. While he was gone I came across another couple heading in the goanna direction so in carefully and slowly pronounced English in case they were from overseas I warned them about the goanna. They were from Melbourne ROFL Anyway, the response from the staff girl to David about the goanna was “Oh him? He’s harmless, just step over him!” You would be right in guessing that it was David who stepped over him first out of the four of us! It seems the goanna was permanently bent into this shape, poor thing. He certainly didn’t straighten out as he moved.

The beetle display was such that you would find anywhere and though it was interesting in person it would not be if I wrote about it. When we suddenly came out at a souvenir shop with a girl keen to show us our photos I asked if we could go back in and see the butterflies once more. Her response was a colloquial Singaporean term I’d just read about that morning “Can, can, can!” which means ‘yes definitely, go for it!’ So we did. 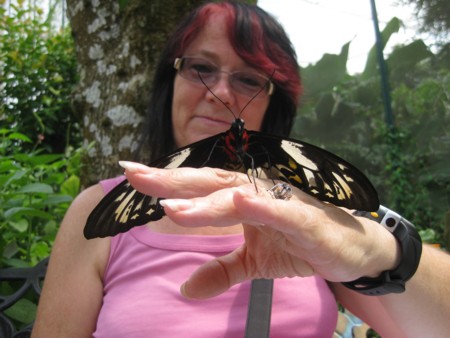 Which meant David had to drag me, kicking once more, away from them a little while later hehehe.

We meandered back down the flights of escalators with the top one working at last, back down past the Merlion and the pointless, ugly water feature, and then sat on a bench near the wrought iron contraption to wait for it to chime. It struck a quarter to three and we weren’t going to sit around for 15 minutes to hear a full chime, so went back down the hill to the foot of the monorail station where there were a couple of cafés. Food at last!!!

The café we chose was a Coffee Bean and Tea Leaf, the same brand as we’d eaten at near the mainland Merlion! I chose a tuna/mayo roll which came with a nice little side salad, and David had pasta something or another that he really enjoyed. I can’t believe how many pasta dishes this man chose while we away because he refuses to eat Italian here at home, and I would love to occasionally!

Despite eating as slowly as we could – and trust me, I’m a world record breaker in that department! – we still had aimlessly to waste almost 4 hours before the Songs of the Sea show. We wandered to the west and saw private beaches belonging to bars and restaurants along the way – none of which were particularly swinging. We were horrified at the prices to hire sun loungers on the beach – $15 single, $20 double, $30 for 2 singles! We wondered about paddling but there were stinger warnings so we decided to stay dry and pain free thank you.

Then we wandered to the east where there was a large grassy area which was not interesting other than seeing a beautiful little squirrel climbing a tree. This walk led us around to another beach. It was fairly warm; we were both drowned in sweat and both had back aches from so much walking since Wednesday and decided to flop down in the shade of a convenient small marquee on a towel that we’d brought with us. David said ‘hang the stingers’ and went for a paddle so I got the whole towel to myself for a while and managed to fit most of my length on it for a lay down. Even better, when David got back he gave my back a bit of a massage.

After a while Mr What-Can-We-Do-Now said we needed to explore some more so we walked further. One of the things we saw was another stinger warning but this one also mentioned stone fish. The water was definitely out of bounds now!!!

We came, at the end of the beach, to a little island. Remember the one I told you to remember from the view atop the Merlion? Well, this was it. And this was its claim to fame ‘The Southern Most Point of Continental Asia’. 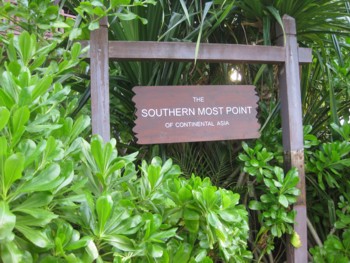 I’m sure in the first photo that there was another island beyond this one so I’m not quite sure how the title works but I’m not arguing. The sign says so, so it must be true hehehe

Here’s how you get onto the island…
Via a swaying suspension bridge not wide enough for 2 people to pass each other! The bridge was fun except for people walking towards us who I need say no more about because you know what happened! And once across we climbed one of the 2 lookouts. 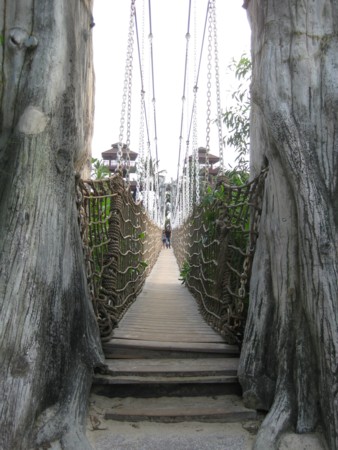 Suspension Bridge to the Island

As someone once said – why do we climb up things to look at the ground when we could see it all while we were down there? 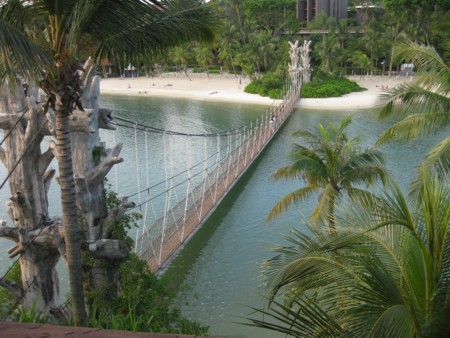 Suspension Bridge from the Island

The journey back across the bridge was even worse because there was a family bringing a baby in a pushchair across!!! We went to great lengths to practically shred ourselves through the ropes so that they could pass us and all we got was a withering glance as if they wished we’d curl up and die as they continued their journey without a moment’s inconvenience to themselves. I said “Thank you. Pleasure!” to their backs.

We ambled slowly back towards the main area, still with an hour and a half to wait before they even opened the gates for the show. And the gate opening was 50 minutes before the show started! I said to David that it was a shame he’d already paid as we had to do all this hanging around to wait for it and he was shocked.

We joined the queue in about 30th position and stood there like morons for aeons! There was nowhere to sit and there was a bent over old grandad in front of us who I really felt for! At 6.30, the time we’d been told the gates would open, there was still no movement at all. It may have been 6.40 when they finally allowed us in and guess what? They filtered the people through in family groups so they could be photographed against a wooden fence before going in. We made as if we belonged to one large group and then slithered past as the photographers were busy getting the group all in position and found a seat AT LAST!!! The seats were hard benches but we cared not a jot!

So here we were, seated with an hour to wait until the Songs of the Sea show. There were a few stalls at the front selling souvenirs and ice creams, and I think popcorn or something of that nature so David said “I see they’ve allowed us in early so they can sell things to us!” Of course the real reason for the wait was for the sun to go down so that we could see the light show in the dark. After sitting for a while we bought an ice cream to help pass the time. That’s about 10 years’ supply of ice cream we’ve eaten this week compared to normal.

Here’s the stage setting in daylight…

Songs of the Sea Stage Set

And the sun as it was going down to the right…

Songs of the Sea Sunset

I’m not sure here whether to tell you heaps about the show for fear of spoiling it if you get there, or to share plenty for those who will not get the chance. I hear they change the show from time to time so perhaps I’ll try to hit a middle-ground.

At 15 mins to go there was an announcement in English and then Chinese. At the 10 min mark it was repeated, and again at 5, but people were still coming in and needed to hear it. For those of us who’d been sitting there for an hour it gave something exciting to pass the time hehehe.

The music finally began and about 6 late teens/early 20s people pranced largely out on to the sand using huge, theatrical gestures, as you need to for such a large audience (approx 2500 people), but it did look funny. And they started to mime to a sound track and David and I looked at each other with ‘WHAT have we come to?’ faces. But they were setting the story and it improved.