After getting off the train at Boon Lay we had to go downstairs to the shopping centre and follow some arrows to the buses and found our way nicely.  We asked what the fare would be at the information counter and then went to queue for the bus.  We were a little way back and by the time the bus arrived the queue was as long behind us as in front.  We followed the others aboard and the seats all looked full by the time we go onboard so, keen to sit on anything rather than stand, I perched on a little parcel rack right at the front and invited David to join me.  Trust me, this was a one-and-a-half-bum sized perch but I didn’t want to be separated and not know if David had got off the back door in the crush and left me!  He squeezed in beside me, drawing his knees up and his feet in so that more passengers could go past him.  Once the bus was full to bursting point they still kept squeezing more on and when I’d had all the air squeezed out of my lungs by how crowded David was on top of me along came a woman with a child in a pushchair and a grandmother.  The driver said that they would fit too!

The mother was wearing a backpack and for the driver to shut the door she had to do a synchronised dance with the doors so that her backpack wasn’t jamming them.  David said he’d never seen anything remotely this crushed before and trust me it was hard for him to speak with one knee jammed under his jaw!

The bus started off and David said that he was scared his feet were going to shoot out and kick someone so I tried to get smaller to give him more room but I could barely breathe already with one of his legs pressing into my chest!  And I was the one with the ‘half a bum’ on the luggage rack so if I’d moved much further I’d have fallen into a tiny space on the floor and probably needed the fire brigade to cut me out.  Along we travelled, stopping for far too long at all the traffic lights and not a single person rang the bell to get off; which is just as well as they’d have had to crowd surf to get off!

It was a fairly short journey thankfully – we could have walked it far more comfortably but weren’t to know that.  Thanks to the traffic and the lights it took us probably 10 minutes on the bus but felt like an hour.  We were incredibly grateful to unfold ourselves, stretch out, and to let our lungs fully expand with the fresh air outside as we walked the short distance to the Jurong Bird Park.

The first exhibit inside the park was the penguins but the semi-dark room for us human viewers was incredibly noisy, crowded with too many people and babies in prams and children pushing in front of us for a better view, but things improved markedly from there thank goodness. 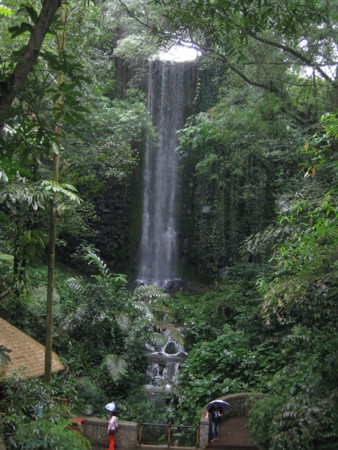 Out in the fresh air and drizzle we saw the expected flamingos, pelicans, storks, some beautiful small birds with a green satin-like plumage and a range of macaws and other parrots.  There was a really high man-made waterfall that was very nice but by now it was raining steadily and, as David had declined going back for an umbrella when we were 6 steps from the hotel, you can imagine who was in trouble.  So we went to the little snack and souvenir shop and I bought one – a children’s penguin in black and white with a head on top and wings out the side which made everyone smile as we passed them all the way home. 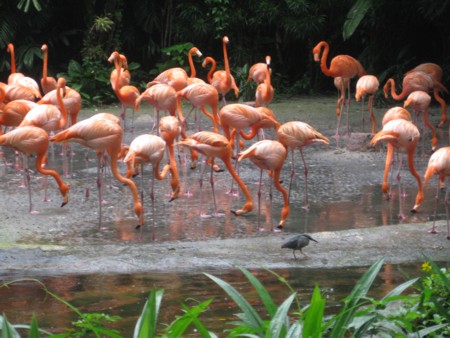 Probably time to stop talking and show some photos…

Love the way these guys have to turn their beaks upside down to drink! 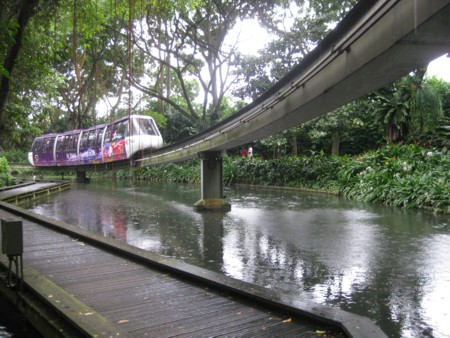 Yes we did go on the monorail.

Love my flowers and these were so intricately detailed! 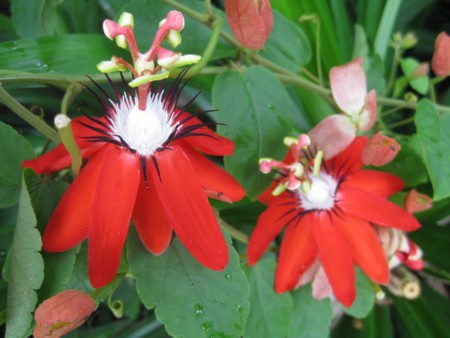 One thing that caused a laugh on the monorail was that there were 3 seats that took 2 people on each in the front carriage with the driver.  We got on first and when the next 2 people got on they asked if we would take a photo of them with their camera – sure!  And then I handed them my camera to take a photo of us.  While this was happening the 3rd seat gained occupants and they gave their camera to the 1st couple to take a photo of them as well.  That’s probably as thoroughly photographed as you can get in a group.  We all spoke different languages but handing your camera to someone – and the laugh afterwards – is pretty universal huh? 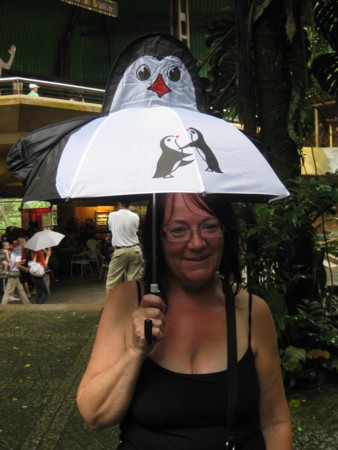 Here’s the umbrella.  It’s only just wide enough for my shoulders but all I really care about is not to need wipers on my glasses.  You can see his right wing if you look carefully.

Come lunch time and neither of us were really hungry so we had an ice cream.  Heck – that’s what holidays are for!

We did the rounds and saw the sights – nothing much of remark until the first of two shows.  We got there in plenty of time and chose seats off-centre but in the front row and sat chatting and waiting when I was aware of someone sitting close to me.  David said she arrived, sat, and then slid as close to me as she could get, and after a short while we got talking.  I did ask her name at one point but it was at least 10 syllables long so don’t ask me to repeat it.

Our new friend was a 9 year old (10 on 1st August!) Bangladeshi girl and I asked her how many languages she speaks.  Three!  She is learning English in school and a very good job they, and she, are making of it too.  Her vocabulary was very good.  I only had to reword a few things for her to follow me though she said afterwards that a lot of the show went over her head.  We had a lovely chat to her and after a while she pointed out her parents further up the seating area but with their eye on her.  What beautiful parents they must be to allow her that freedom to sit where she wanted and chat to us, but still keeping a loving eye on her.  I was so impressed! 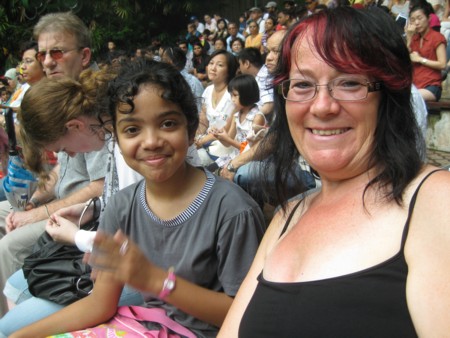 After the show her father came and introduced himself and shook our hands – he is a cruise ship captain and had brought her to Singapore once before on board his ship.  But this time they’d flown together as a family for a holiday.  She really did make our day and was a ray of smiling sunshine.  It was sad to see her go at the end of the day!

The show started suddenly with a flock of flamingos squawking their way into the stage area which hushed the crowd instantly until they started to laugh.

The staff member who hosted the show was a really gorgeous Asian man who was so kind, friendly and fun in his attitude and we were treated to all sorts of antics by a wide range of birds including one that flew into the audience to take a $2 note from a volunteer.  And another who took, and then returned a $10 note to a different person.

One Mexican parrot, named Amigo, counted to 10 in English, then Chinese, and sang a short song in Chinese, then Malay and then sang Happy Birthday in English.  The Happy Birthday song was to 2 boys who’d had their party at the park but I took it for me as well seeing as it was also my birthday that day.

After this show we went to the birds of prey show and our young friend sat by us again.  We’d saved her a seat!  It was a good show but it started to rain again quite heavily so many umbrellas went up, including my penguin and everyone scarpered the moment the show was over so we didn’t really get to say goodbye to our friend properly which was a shame.  I’d tried to shelter her under my penguin with me but he’s a little small for sharing.

We left the park well before closing time which meant the bus home was almost empty and I wish I could say the same for the train but it was absolutely chokkas and 4 healthy young men were seated in the ‘reserved for the sick and elderly’ seats so this 54-today-grandma had to stand and cling to David for dear life for the whole long journey.  The healthy young men pretended to be asleep to hide their guilt.

We transferred to the next train which was also pretty busy but we only had 2 stops to travel so it didn’t matter.  And this was followed by a walk in the rain to the shops over the road to restock tea/beer/nibbles for our room and then back to the hotel for a shower before dinner.