Now. The next bit was wonderful. There was a bus stop next to an oval, and on the edge of the oval were some public toilets. Closer to the road and the bus stop was a little brick building with 2 green doors and posters on the outside. I began to read. Something about automatic toilets and push the button to open the door. You must be joking! I wanted to go, but I wasn’t gonna go in there! The next minute a lady came out giggling and said “Oh, you must see it. You’ll never see one again”. I eyed her suspiciously, but she assured us that it was a worthwhile experience. Sure!

Well, we plucked up all our courage and pushed the button. The door slid open. I said to David “You come too”, and he stepped through unwillingly. Although there were 2 toilet rooms, neither were ‘male’ or ‘female’. It was quite large inside and there were 2 more buttons on the wall next to the door marked ‘open door’ and ‘shut door’. As the door shuts, ambient music starts to play. Then you use the loo in the normal way, but push a little red button for toilet paper which feeds out 3 sheets. Then, as you wash your hands, or leave the cubicle, the toilet flushes automatically. To wash your hands, there is an oblong recess in the wall. You start from the left and a sensor detects your hands and dispenses soap. Then, as you move to the right, another sensor gives water, and a third gives the hot air to dry with. Also, as the door closes after you, the floor washes itself. So we came out giggling too, and told the next person about it, who decided to overcome their fears and investigate too!

Back on the bus, and we saw the outside of the proper shopping centre for locals, but didn’t bother to go in. We saw the famous Cable Beach – complete with its ½ dressed women. Cable Beach is a single, 22 km stretch of beautiful sandy beach, if you’re into that kind of thing. We’re not beach people, 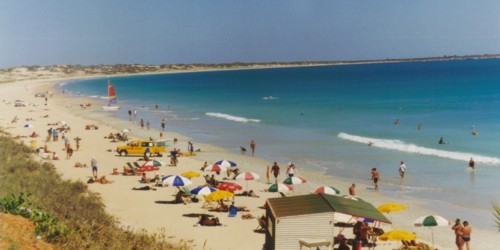 although it was lovely looking out to sea, so we just stood at the railing above the beach for a while. We had a bit of a laugh at a couple laying on their backs next to one another. She was topless, and they were both browner than I have ever seen a white skinned person be. Without turning his head the man lifted his arm and smacked his hand down [none too gently] exactly on her boob. Direct hit! She didn’t flicker an eyelid. Can he see sideways? Do they have precise, practiced spots to lay? Maybe the sand is moulded to their bodies – accustomed as they must be to laying there? It was such a totally unromantic move. Good shot though!

We decided to have a sandwich and cold drink for lunch from the beach kiosk, and sat at a table on the grass and watched the sights go by. Then we caught the bus in the other direction to go to the Tourist Bureau while it was open. This was not very inspiring at all – more of a souvenir shop and no free maps without having to ask for them, and it was very busy. We went back out and caught the bus back to the resort, where we could finally book in.

So we showered at last!!! And got settled in our room and decided that it would be better to stay awake until evening. The room was a poor comparison to Darwin [for the same price]. Less competition, I suppose! with Broome being such a small place. We only noticed 4 places worth staying at, plus a caravan park. [I’m told there is another!]

Now we were actual residents, we had a bit of a look around the resort. There was a restaurant which we had been told was booked for a private function that night, a fair sized swimming pool, a sand-pit with volleyball net and a ‘Satay Hut’ which was a walled off area with a little swimming pool and an open air bar, for use by residents and locals alike, and an open air kitchen where they serve satay skewers or a Greek version of a kebab [different name which I can’t remember] with salads.

The Satay Hut was closed until 6 o’clock, so we bought a drink each and sat on the 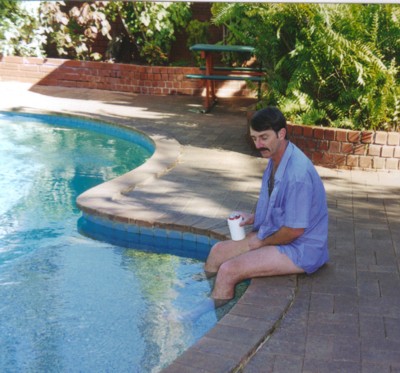 edge of the pool with our feet dangling in the water. It was lovely and cooling and peaceful. We didn’t have the energy to swim. There were some other men at the bar, but we had the pool to ourselves and just sat and chatted. Seeing as there was little choice within the resort and a fair walk to anywhere else, we decided to eat here so, after a second leisurely drink, went back to our room to change.

Dinner was good enough, although the restaurant would have been more what we’d had in mind. Another drink and it was 8:30 and well and truly bed time for us poor tired old things. We rang the boys who asked what time it was for us. We assured them that we were back in WA and it was the same time as for them. The coach journey had actually been 25½ hours because we’d been ½ hr late, and we’d used 1½ hours twice with the time difference as we crossed the border.

We woke before sunrise. Habit? Madness? Who knows! We were on the 2nd floor and had a little balcony, so sat out there and had a cuppa and watched for the sun rise. Broome is on a bit of a peninsula so if you like, you can watch the sun come up and go down over water. Odd! We would probably not have reached the beach in time [good excuse?], so stayed and drank our coffee and watched the sky lighten.

We showered and dressed and went to see if the restaurant had survived the ‘do’ the night before and could serve us breakfast. It was 5 mins before opening and the waitress asked if we would mind coming back. We didn’t mind. It turned out that she was doing the shift single-handed because everyone else had been working til after midnight the night before. It had been a school ball. If there had been any noise, only 30m from our room, we certainly didn’t hear it!

Breaky was as breakys are. We had a buffet, but it was nothing like the spread that had been available at the Carlton in Darwin. We definitely should have done the holiday the other way around! Broome would have been nice enough if it had been first. I have wanted to go there for YEARS and am glad to have been, but wouldn’t bother again. Admittedly we were only there for 2 days and didn’t go out to the pearl farms, but there was very little else to do. If you want a lazy holiday, fine, but we like to go and see and do.

The part we enjoyed most about breaky was when we had toast. There was a little 4 compartment rack on our table with those individual packs of honey, jam, vegemite and peanut paste stacked in. David had jam on his first piece and then opened the next one for his 2nd piece. It was peanut paste – yuk! I like the stuff, but not for breaky. David hates it always, especially the smell. He did notice before he spread at least! The whole section had only had one jam on the top. We tipped the whole thing out and made the people at the next table laugh. Then started a search for more strawberry jam on other tables – uninhabited ones of course! There was some apricot jam, but that was all, so he plucked up courage [since when did David need to do that?] and asked the waitress. She apologised and said someone had obviously been shirking and brought us a whole stack.

Then we went back to our room and packed up again. We had to book out by 10 o’clock, and our flight wasn’t until 6pm. We booked out, but left our luggage at reception again. We had a complimentary ticket for an airport transfer bus, so needed to go back there anyway. Then we wandered around. It wasn’t worth buying a day ticket again for the town-bus so we walked quite a fair way.