From here it was a warm day so we took the lollies/chocolate back to the room. David just popped up to the room with them and left me sitting in the car. Wow – my hero four days in a row!!! We decided to go and walk along a ‘mangrove walk’ mentioned in one of the little brochures we’d picked up and this was only a minute or two out of town. This was absolutely the laziest holiday we’ve ever had!!! 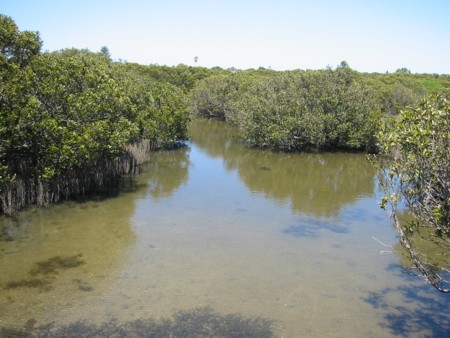 The mangrove walk was really just something to do and somewhere to idle along. There were some signs to read – heaven for me and a ‘will you hurry up’ situation for David. Hehehe. The walk was a long boardwalk constructed between the mangrove trees, which was very pleasant and the water below was very clear – we could see ‘tiddlers’ below and I don’t think I’ve stood and watched tiny fish since I was a kid. The information boards had told us that these were the southern-most white mangroves and it was a whopping 2,000 kms north before the next lot. How interesting!!! 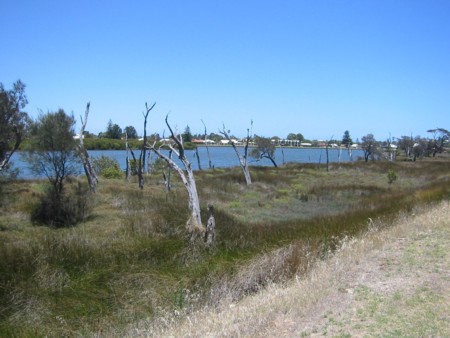 Dead Trees Along the River Side

After the boardwalk there was an ordinary concrete path along the edge of the river so we continued along here for another couple of kms before deciding to come back to the car again. It was a very pleasant and relaxed walk.

From here we decided to go to the little town of Australind so drove the short distance between the 2 in about 10 minutes. We thought we’d go into the shops to get some lunch before continuing to see if we could find the tiny church we’d seen last time we were there. As David waited to turn into the shops on the right I saw a vets on the left and managed to whip the camera out fast enough to get a shot of the front of it. So different and so cute. 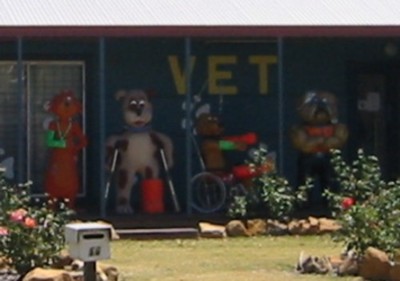 Then we turned into the shopping centre at Australind. I’m sure that wasn’t there last time we visited, but then it’s been 20+ years so one must expect progress 😉 Modern life brought with it new speed bumps and new quantities of traffic fighting for parking spots, but we’ve had worse. Just to the side of the shopping centre was a cafe named The Verandah, or The Patio or something. Must write these stories closer to the event!!! Just remembered, and White Pages say there is one, it was Portico, Cafe Portico. We decided to have something to eat there as it looked nice – open on 2 walls to the beautiful, sunny, warm day. It was a long time since breakfast and a fair while past what should have been lunch time, but we hadn’t eaten a lunch. Even so we decided on a muffin each as they looked yummy, and we had dinner plans. No, not that Thai again!!!

Somehow it took a very long time to eat our muffins and drink our coffee because it was so very nice sitting there. The atmosphere was really special and friendly, and the 2 young staff members were chatting happily together – a pleasure to just soak it up. But eventually it made sense to move on so we looked around the shopping centre. More alternate shops than anything else though there was a supermarket, newsagent and chemist just to be ordinary. In the middle was a display attracting attention with the kids and lo and behold it was yet another ‘unsavoury creature’ show. This one had some small snakes out being handled by children and also a bobtail lizard being passed around to everyone who wanted to hold him. There was hardly any supervision but everyone seemed happy.

From here we wanted to see the little church and I suggested to David that we walk as I felt it wasn’t much further. We walked along the outside of the shops and there in the car park still was a little old wooden cottage which said ‘Museum, tourist information, teddy bears…’ so in we went for a look. What an incredible place!!! Absolutely chock full of old things but all of them had price tags on. We enjoyed a lovely leisurely look around here, admiring all the old things and, I have to admit, pricing some things we own ourselves. There were old crockery sets, toys, fire bellows, pictures, something for every taste and every purse. One room was full of shelving with hundreds of bears – some old, some new. We did succumb to buying a tiny wooden stool for David to put his feet up on while watching ‘tv’ (DVDs on his computer) and when we were paying David asked how come everything was for sale. The guy replied that each room was full of things from different sellers and he didn’t know where they got it all but there was a steady supply. Interesting! While we had his attention I asked if it was much further to the little church. Duh!!! If there hadn’t been curtains at the windows we’d have seen it from the back rooms. Oh well – these city folk can be dumb 😉 He did tell us though that the church was locked and we were too late for the hall next door where the key was held. Oh well, we went and peered through the windows anyway, and that was fine. 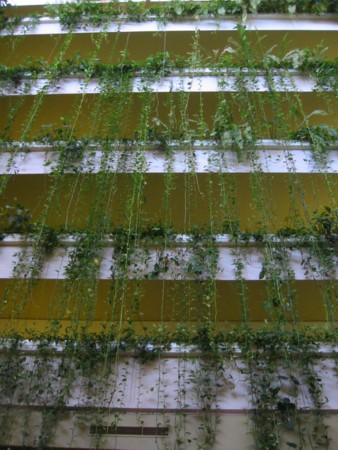 Hotel Ivy hanging down from the Balconies

From here we went back to Bunbury to freshen up before our dinner which we’d booked in the hotel buffet. The hotel reception, swimming pool and buffet were all on the ground floor of the hotel with a massive void above them. All of the rooms led from a circular balcony outwards from this and they had ‘devils ivy’ trailing from pots on every floor. It did look very effective, though not the first time we’d seen such a thing as the hotel we stayed in at Darwin in 1999 had the same treatment.

We did not swim while we were there at all, it was just too public for comfort. When we had first entered the hotel we could smell chlorine immediately but after that we never did again. Mild enough to get used to it quickly I suppose. 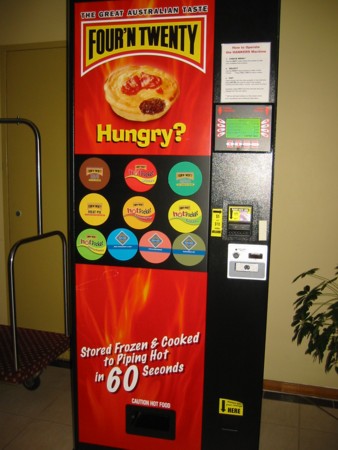 Oh, another thing while I’m talking about the foyer… there was a hot pie machine. I was stunned. Hot pies from a vending machine? But sure enough I did see 2 guys buying some at one point and they were certainly eating them as if they were piping hot. I know, I’m mad to have taken a photo! But I was fascinated.

David decided it would be nice to go to the bar and get drinks to take to dinner with us so I got a glass of amaretto for a change. She gave me a huge glass with a fair wad of amaretto in the bottom – yummm! I laughed and told her David was jealous at the quantity and when he ordered a scotch with no extras she poured him a double, looked around the place and added some more. Very kind of her wasn’t it? We sat on some comfy chairs and chatted for a while and then went through to the buffet – at a table booked for 7pm. The girl told us they’d reserved table 11 for us and we went and sat down. A few minutes later she came up and quietly asked David something. He afterwards told me she’d got a table booked for 7 PEOPLE under our name. Well in that case why were we sitting at a table for 2 that she’d told us was reserved for us? Odd. 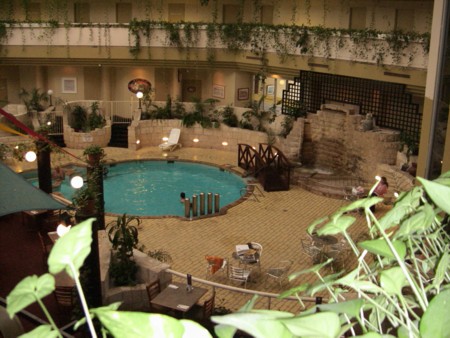 Next to attack the buffet. There was a nice assortment of food, if small, for the size of the hotel, though it was obvious they were not booked out. Maybe others have spread the rumour of minibar staff hammering your door down 😉 There was a huge bowl of prawns and smoked salmon and other yummy things which we started on, then up for the hot foods. But do you know what? Hot wasn’t the right word, barely luke warm truth to tell – we wondered if someone had forgotten to turn the bain maries on. Odd.

There were nice vegies and there was a roast joint of some description, but no chef to carve it and no implements to do so yourself. Perhaps it was made of rubber and just for show? I don’t know why but I went back to the table before David just in time to find a waitress taking our glasses away. I said to her “That drink isn’t finished with!!!” and she just said “Oh” as if she’d known that all along and just put it sulkily back. Odd. As I keep saying. 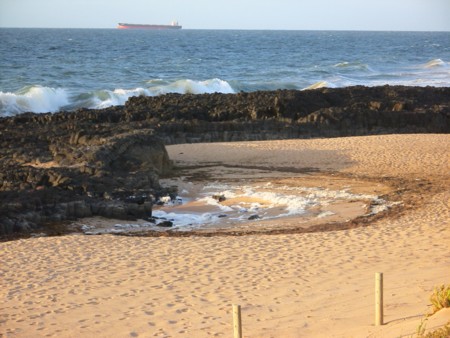 A little after that the nice waitress came and asked if we’d like more drinks. So, it was a set up!!! David said “Well I’d like one, but I doubt I’m allowed!” and she laughed and went away. We continued our nice but tepid dinner and eventually just sat talking and laughing when she came once more to ask about our drinks and I said to her “Oh, I’m so pleased you’ve arrived, he was nagging at me and you’ve saved me!” She went away once more, laughing and shaking her head. Bit stunned by us I think. Yes, David did get another scotch before the night was out. I still couldn’t believe that other waitress trying to steal my drink – there was about 1″ still in the glass and it was very obvious it was a spirit, probably about $5 worth! I took the table reserved sign and balanced it on top of my glass the next time I left the table, and David stayed to guard it too.

Dessert was a choice of healthy fruit salad, cheesecake (which was not as nice as the one I make at home) or sticky date pudding. I had one of each of the last 2. Then to top the night off David asked me if I’d like to go for a nice, romantic walk. I was just smiling contentedly that he did love me when he added quickly “So I can race back fast and shut you out!” 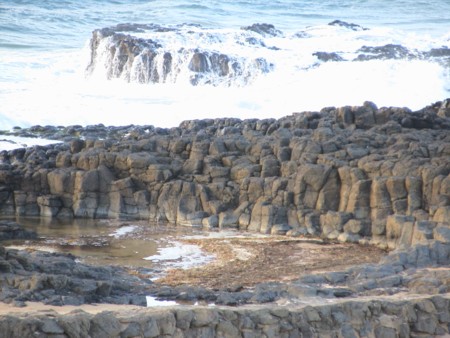 But we did walk down to the ocean once more and padded along the sand, barefoot in the dark, and went to explore where the water was running between the rocks.

And then back to the hotel to open the sliding door to stop the wind howling noise before hitting that hard bed again. We each had flat spots on our arms and legs by now anyway so no fear of rolling out of bed in the night. Settled down, turned the light off, ahhhh. Suddenly there was an awful droning, thumping noise which did not go away. It seems we were right on top of the night club which had just started up. What a laugh. So we tossed a coin to see if we were going to endure the wind whistling with the door shut, or the droning bass thumping with the door open. The wind won. Well we’d had ONE quiet night!

Well, I shan’t bore you with breakfast on Saturday morning, but we’d booked at the hotel buffet once more and the food was as tepid as the night before. They had removed the rubber roast though so that was a relief.

Then it was time to check out, and we drove straight home without stopping. Made good time and it only took a couple of hours.

The End of our Bunbury Holiday…