The guide at Ngaut Ngaut was a wonderful lady with a beautiful smile who explained about the markings on the cliff, the local diet, the tribal traditions and names and a whole lot more.  I think her name was Cynthia – oh for a better memory!  She told us that the small dots on the carvings represented how many days it would take to walk to places represented by other markings, it really was fascinating.  I’ve been to other talks like this but none as in depth.

She told us that McDonalds didn’t invent the ‘golden arches M’ and we all laughed. 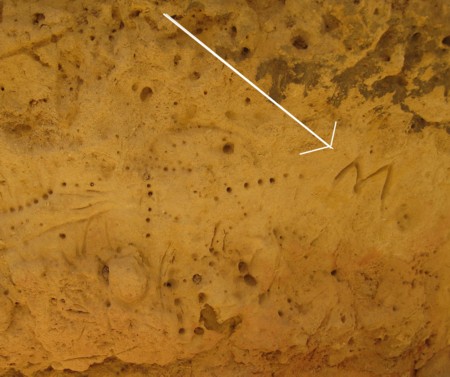 This one has been there for thousands of years!  From memory it was about 4” high – not as small as this photo makes it appear.

After she’d finished talking to everyone I asked her about the man I’d seen in the brochure photo and she told me that he had been her husband but he had died, and she showed me 2 photos of him in a locket around her neck.  I don’t particularly know why but I got all emotional but she nearly joined me.  It was as if she and I were both feeling one another’s reactions and we were making each other worse.  She turned to answer questions from other people but I had to turn and face the cliffs with David waiting for me to pull myself together while tears streamed down my face.  I just felt such a loss for not meeting ‘The Man With The Beautiful Face’, and for his wife who obviously had loved him deeply.

After the talk we had some free time to wander along the boardwalk looking at the cliffs and markings and look at, or buy, some things the family had made on a craft stall and also have drinks of cold water – well needed in the heat!  The crafts were really beautiful but we didn’t buy anything.

Then we all boarded once more for our lunch.  We had no sooner finished lunch than there was a lot of excitement on the starboard bow and we came to a stop.  Alongside was the most beautiful 2-storey glass houseboat which had got itself stuck on the bank so our 2nd in command and BJ went off in the tender to see if they could help. 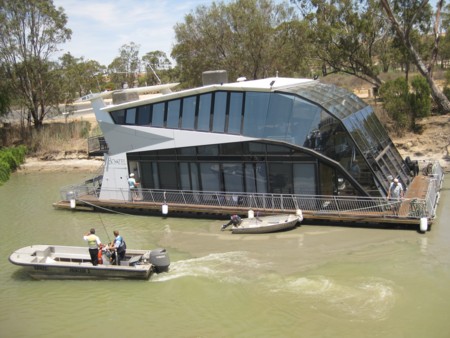 They tied us to the back of the Boatel (as it was named) and hauled it away from the shore but the person driving it promptly did the same thing they’d already done and almost beached it again.

In the end our 2nd in command had to board the Boatel and drive it for them.  He was not very complimentary when he got back on board the Princess!

The next excitement was the speed boat rides and David, Donna, Chris and myself kept ourselves to the back of the line as we wanted to all go together. 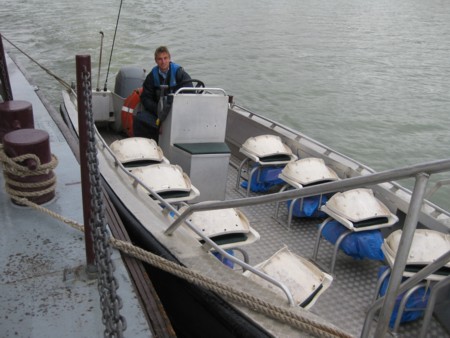 We also hoped that the last ride would be the best value for money as far as speed and bounce was concerned.  There were 2 trips before there was room for us and it looked like great fun!  Everyone was fitted with a life jacket by BJ while they waited for their turn.

The seat backs were obviously not folded down the day we rode in it but the above is the only photo I have of the boat in question.

When it was our turn to get on board, David and Donna – the two most adventuresome – took the front seats, which was no surprise to anyone.  I sat behind David on the port side and Chris was behind Donna on the starboard.  Everyone was seated and then off we went, whhhheeeeeeeeee!!!!!  First we raced ahead of the Princess and then suddenly turned which sprayed water all over us and made us all laugh with delight.  Then we raced far behind waving at Maria, still on the Princess taking pictures of us, as we passed by.  Then we turned again, complete with more spray, and the best was yet to come.  Remember the picture of the wake from the Princess?  It was like a fairground ride bouncing over that, whumpf, whumpf, WHUMPF, with water cascading fairly forcefully over us at times.  I held my glasses on with one hand for fear they’d fly off me and everyone was laughing exuberantly between gasping for breath when the water stopped.  It was such a buzz and such an extreme difference to the stately pace of the Princess.  We begged BJ for more and he obliged with the round trip again before berthing once more. 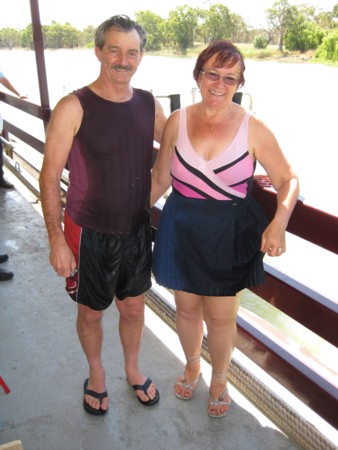 Not sure if you can tell from this photo but the colour of David’s top is actually the lighter colour down his right side, the front has changed darker because he is dripping wet!  You can tell from my skirt that I’m the same, and you can see that our hair is plastered, dripping, to our heads.  Goodness knows we’d had to be brave to sit in the cold puddles on the seats to even start our ride LOL  Despite it being a hot day we were happy to go and have a warm shower after this and put on some dry clothes.

There was ‘light entertainment’ in the dining room featuring our piano player so, as you can imagine, David and I elected not to indulge.  Instead we took a game that I’d packed from home into the aft lounge and played a few rounds and had cups of tea until it was time to get ready for dinner.  Well OK, the drink beforehand 😉

Tonight was the Captain’s Dinner and we were very honoured to see that his name plate was on our table!  We had been asked to ‘dress for dinner’ (if we wished!) so here are our outfits for this night. 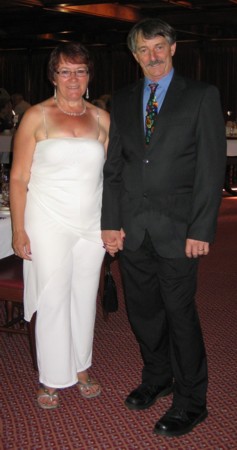 In Our Best Gear for the Captain's Dinner

We were all invited to join the captain and officers for pre-dinner drinks, sherry, wine or orange juice and chat, which was very nice indeed.  Donna and I both followed these with a Procrasstinating Pelican.

I have to say that this night I do remember dinner!  It was a seafood buffet but it was the unveiling that was spectacular!  Jason announced the menu as he did each night but this time the rollerdoors were down around the buffet servery until announced and the lights were turned off in the dining room.  As the rollers rose, the lighted scene behind was like something from a movie set!  Dry ice smoke smouldered and drifted from the dishes above crisp red and white cloths and the 2 chefs were there with their tall, snow-white hats and the Murray River flag was proudly displayed.  Unfortunately I was a bit slow in taking my picture so didn’t get the full effect but hopefully you can still imagine what it would have been like.  I wasn’t expecting dinner to be a photo opportunity! 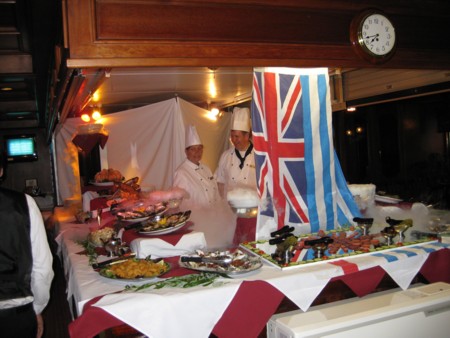 Some of Jason’s announcements had been for passengers disembarking the next day and asking them to settle their bar accounts before going to bed that night.  This was not something we wanted to hear as Chris and Maria would be leaving us in the morning.  These past 4 days were definitely one of those times in life you’d like to freeze and remain in.  Do a ‘Groundhog Day’! 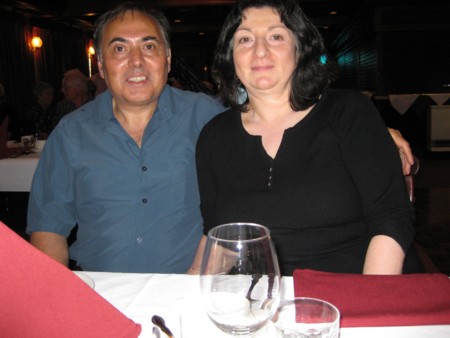 Thank you Chris & Maria for being such wonderful friends on our holiday!!!

Now here’s the Captain, at the big Captain’s Dinner, trying to make out he was only fed bread and water LOL  Granted, he did have small portions of everything but it really was not as he is making out here… 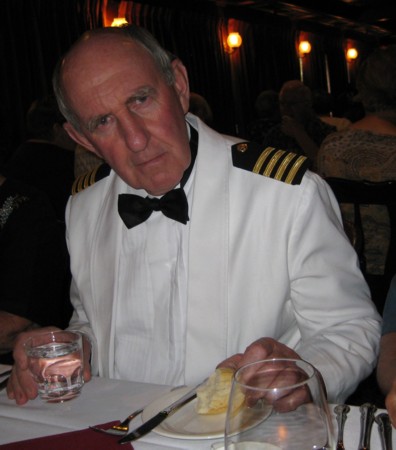 Once dinner was relished to the last morsel there was dancing for those who wished.  For the most part though the members of our table just sat and talked and laughed and pretended that the morning wasn’t going to arrive.  There was one slow mushey dance that I dragged David up to do and that was lovely.  We rarely dance but it’s lovely once in a while.

A lot of the staff were going to change tomorrow as well so we were to say farewell to BJ, Lyndon, the captain and some of the waitresses.  85 passengers were getting off and only 40 replacing them so we were having a smaller staff as well.

And all too soon the night really was over and we went down and said “Goodnight duck ducks!” on the way into our cabin. 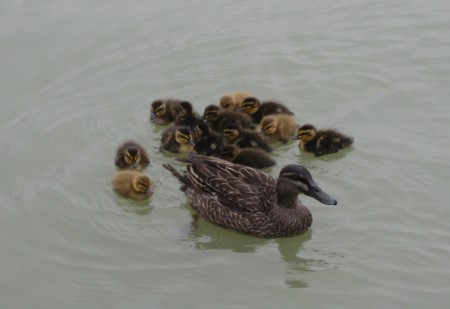 Fri 20th
We woke even earlier than any other morning to date.  We were waking earlier and earlier every morning and the whole time I was thinking how ‘out of whack’ it would make us when we not only returned to Perth, 2½ hours behind, but our usual lifestyle of going to bed at 2am and waking at 9.30.  We’d awoken this day before 6am making it 6 hours earlier than our normal routine!  A huge difference for the mere 2,700 kms that we were from home!

Anyway, today David was the Birthday Boy so I gave him his 3 cards and no presents that I had with me.  A bit meagre but he never was a one to want a fuss so was completely happy.  We celebrated his special day by taking our cups of tea and packs of biscuits out to the bow to enjoy the peace and freshness as we had done the day before.  Actually, we needed Earl Grey tea for me from the aft lounge first and got a 2nd pack of biscuits each as well.  Well, it was a special day 🙂  I do only mean the little packs with 2 biscuits of course!!! LOL

After showering we went up for breakfast which was at the earlier time of 7.30 today to allow those disembarking time to be organised and the staff time to make up their rooms for the new passengers.  Jason had a lot of announcements to make but one of them was to wish a very happy birthday to David and everyone joined in with the wishes.  For those wondering, that was what my ‘love note’ to Jason had been; the request that he announce David’s birthday this day.  I was really happy that he’d chosen to do it at breakfast because we still had all the passengers we’d befriended on board.  David told me off for dobbing but was happy really.